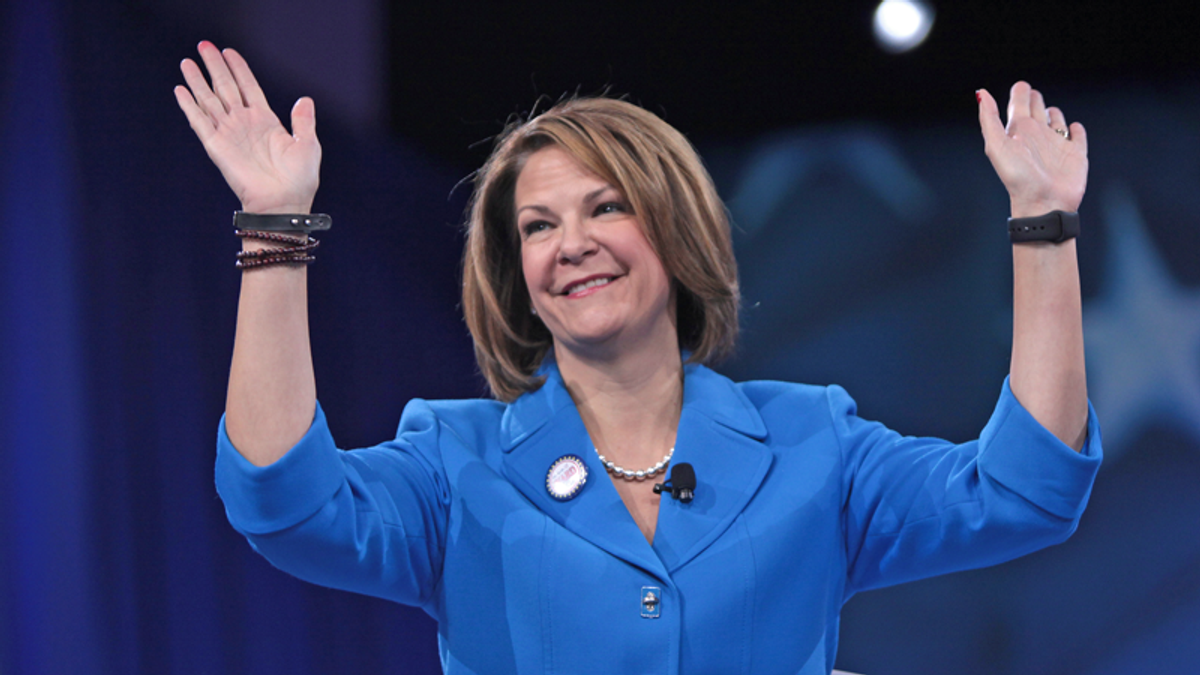 Arizona Republican Party Chair Kelli Ward is in a political pickle as she refuses calls to audit her own election after pushing Donald Trump's lie about election fraud.

Ward claims she was re-elected as chair during a chaotic January 23rd meeting, but her claims are not enough for some Republicans.

"Republican members of the Arizona Legislature are calling on Kelli Ward, the controversial chair of the state Republican Party, to either audit the election processes and results of her win on Jan. 23 or to remove her calls to audit the results of the 2020 presidential election, which President Joe Biden won," the Arizona Republic reported Thursday.

"More than a dozen GOP members of the state Senate and House of Representatives signed onto the letter, obtained Thursday by The Arizona Republic. Ward is among the Republicans in Arizona and nationally who spread baseless allegations of voter fraud and claimed Biden and Democrats stole the 2020 presidential election from former President Donald Trump," the newspaper reported.

In the letter, the legislators said Ward was undermining their message.

"Now, our collective message is being undermined by your insistence that none of these standards should apply to your election as AZ GOP Chairman," the lawmakers said. "The inconsistency is simply not acceptable."

"Without question, an election for Party Chairman pales in comparison to the importance of electing a United States Senator or President of the United States, but the principles that surround every election, no matter how big or small the office, must remain the same. We urge you to heed the calls of your voters and allow for an immediate audit of the election that was held on January 23rd, in a manner that is fair and transparent. Or we would ask that you remove yourself from efforts to properly audit the elections held in Arizona on November 4th, 2020, as you would be an unwelcome distraction and foil for the media to use to discredit our efforts to protect our state's voters," the letter read.

While Ward fought with establishment Republicans while pushing Trump's conspiracy theories about voter fraud, she's now being called out by the same Trump supporters who were once on her side.

"The letter was signed by some of the Legislature's most conservative members, including Rep. Mark Finchem, R-Oro Valley, who was involved in an attempt to overturn the state's presidential election, and Rep. Shawnna Bolick, R-Phoenix, who has proposed letting the Legislature void the results of a presidential election if it chooses," the newspaper reported. "Rep. T.J. Shope, a Coolidge Republican, signed onto the letter because he said Ward should be held to the same standard she is applying to others."

Former Minneapolis Police officer Derek Chauvin was found guilty on all charges by a jury in Minnesota for the killing of George Floyd last year.

The jury's verdict comes less than one year after video showing Chauvin kneeling on the back of Floyd's neck for more than nine minutes sparked nationwide outrage and led to mass protests against police brutality throughout the United States.