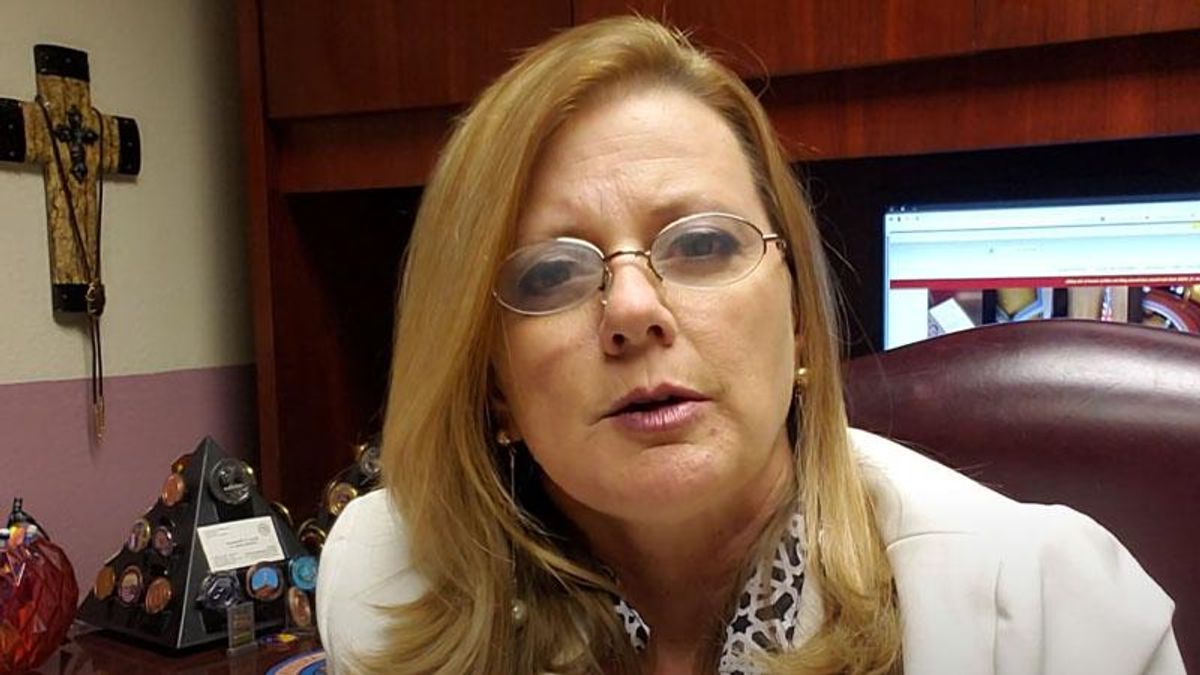 After comparing vaccine supporters to Nazis and sharing an image of needles in the shape of a swastika on social media, Republican state Sen. Kelly Townsend dismissed a Jewish organization who admonished her to “learn your history."

On Sunday, Townsend tweeted an image a Nazi flag made up of needles with a caption that anyone who is vaccinated and “complaining" about the unvaccinated are saying the vaccine doesn't work.

The Anti-Defamation League, an international Jewish organization that focuses on fighting back against antisemitism and hate, sharply criticized Townsend on the social media network.

“(Townsend) should delete this outrageous and offensive tweet," the Arizona chapter of the Anti-Defamation League wrote on Twitter. “There is never a valid time to share this flag which represents oppression and genocide for so many. Comparing health mandates to Nazism is highly insensitive and escalates tensions around efforts to fight #COVID19."

Other local Jewish organizations have chimed in on Townsends' comments as well.

“There is no place for Nazi imagery in regards to vaccination. Period," the Jewish Community Relations Council of Greater Phoenix said on Twitter. “This is shameful, offensive and insensitive. Do better."

Townsend, whose legislative district includes Mesa and Apache Junction, posted subsequent tweets agreeing with other users who compared vaccinations to Nazi Germany. She also liked tweets by other users who had photoshopped Sen. T.J. Shope's face onto Nazi officers asking Polish citizens for their papers.

These officers, known as the Ordnungspolizei, played a key role in the Holocaust. Townsend liked a number of tweets comparing Shope to these officers.

Shope opposed a bill during the 2021 legislative session that would have barred private businesses from refusing service to unvaccinated customers. But Shope, a Coolidge Republican whose family owns a grocery store, said he opposes government-imposed vaccine mandates, tweeting last week, “I join Gov. @dougducey and I'm sure a majority of my colleagues in looking forward to our day in court with @POTUS over this unconstitutional mandate!"

The officers Shope was compared to perpetuated a number of war crimes and were also known as the “Order Police" and were responsible for many of the atrocities in the Warsaw Ghettos. On July 27, 1941, one battalion of the unit was responsible for the massacre of between 2,000 to 3,000 Jews in the recently occupied Bialystok. Hundreds of the victims were burned alive while inside a synagogue.

This isn't the first time Townsend, who opposes vaccine use, has compared vaccination requirements to Nazi Germany or the Holocaust. In 2019, Townsend was denounced for comparing school vaccination requirements to the tattoos that Nazis forced upon Jews in concentration camps during WWII. In a now-deleted Facebook post, Townsend took a poll asking if the government should be able to “forcibly place your id number on your arm," later going on to say in the post that those who had a “visceral reaction" to the poll would “understand" the idea of “forcing you to inject a solution" into your body.

Townsend would later claim in an interview with the Arizona Republic that she was not trying to compare vaccinations to the Holocaust, despite the clear connections to the actions of Nazi Germany.

And she isn't the only Arizona politician to draw comparisons between the Holocaust and Nazi Germany to vaccines and COVID-19 mitigation measures.

Republican Rep. John Fillmore, who represents the same legislative district as Townsend, apologized last year after he linked mask mandates to the Holocaust at a “Freedom Rally." Fillmore compared masks to the tattoos those at concentration camps were forced to get.

Arizona Republican Party Chairwoman Kelli Ward also was criticized when she agreed with a tweet that said so-called vaccine passports were akin to the yellow Star of David Jews were forced to wear in order to make them identifiable to Nazis.

Comparing the vaccine and an government attempts to encourage its use to the Holocaust has become a popular analogy, particularly among conservatives in the wake of President Joe Biden's decision to make employers with more than 100 people require the vaccine.

However, that requirement appears to be on firm legal ground, and religious exemptions for vaccines still exist for those who wish to use them. Those who choose not to get vaccinated will have to get tested once a week. Additionally, those medically exempt from immunization can work remotely under the new guidelines.

Roughly 4 million Arizonans have gotten at least one dose of a COVID-19 vaccine and about 3.6 million are fully vaccinated — approximately 50% of the state's population.

“We strongly recommend that everyone 12 and older get vaccinated against COVID-19. Vaccines are safe, free, widely available and proven to be highly effective at preventing hospitalization and death from COVID-19," Arizona Department of Health spokesman Steve Elliot said when asked about Townsend's comments. “For those who remain hesitant, we suggest talking with your healthcare provider about the benefits of getting vaccinated."

Anyone seeking a vaccination can find vaccine information online for Maricopa County here and statewide here.