"Prosecutors allege that after a deadly shootout in a nearby alley, Kuykendall drove to Presbyterian Kaseman Hospital with the victims, removed his shirt and told a security officer 'that there were three dead guys in the Chevy' before he walked away," The Beast reported. "The criminal complaint—first obtained by Seamus Hughes, a researcher at George Washington University's Program on Extremism and a Daily Beast contributor—notes that authorities only believe Kuykendall 'may be responsible for the death of one of the three men.'"

Kuykendall is being held in the Bernalillo County Metropolitan Detention Center.

Video obtained by KOB-TV appears to capture the shootout, while a second video apparently shows Kuykendall leaving the hospital after ditching the vehicle.

For clarity, the man in the second video is seen walking away from Kaseman Hospital in the area where a black sedan… https://t.co/IfUAsaZ5aI
— Ryan Laughlin (@Ryan Laughlin) 1620951145.0

"It's far from Kuykendall's first run-in with the law. 'Kuykendall has an impressive criminal history, with at least 35 arrests in New Mexico and Massachusetts,' the complaint states. His crimes range from forgery and identity theft to larceny and conspiracy, to an assault of a family member in 2018," The Beast reported.

The criminal complaint lists four convictions that prevent Kuykendall from owning a firearm: 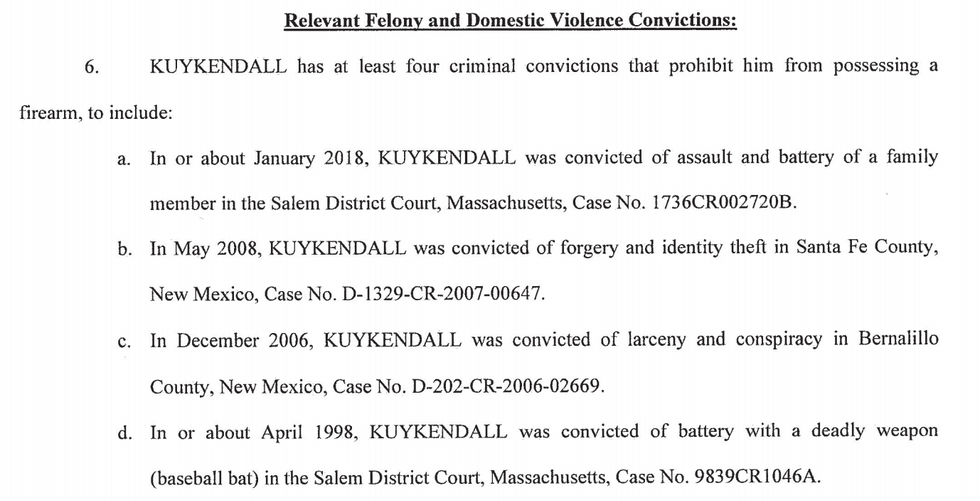 Guns SmartNews
Please contact support@rawstory.com for customer support or to update your subscription. Report typos and corrections to: corrections@rawstory.com.