'Cruel on purpose': Americans rage at Times writer who claims Biden grieves his family too much 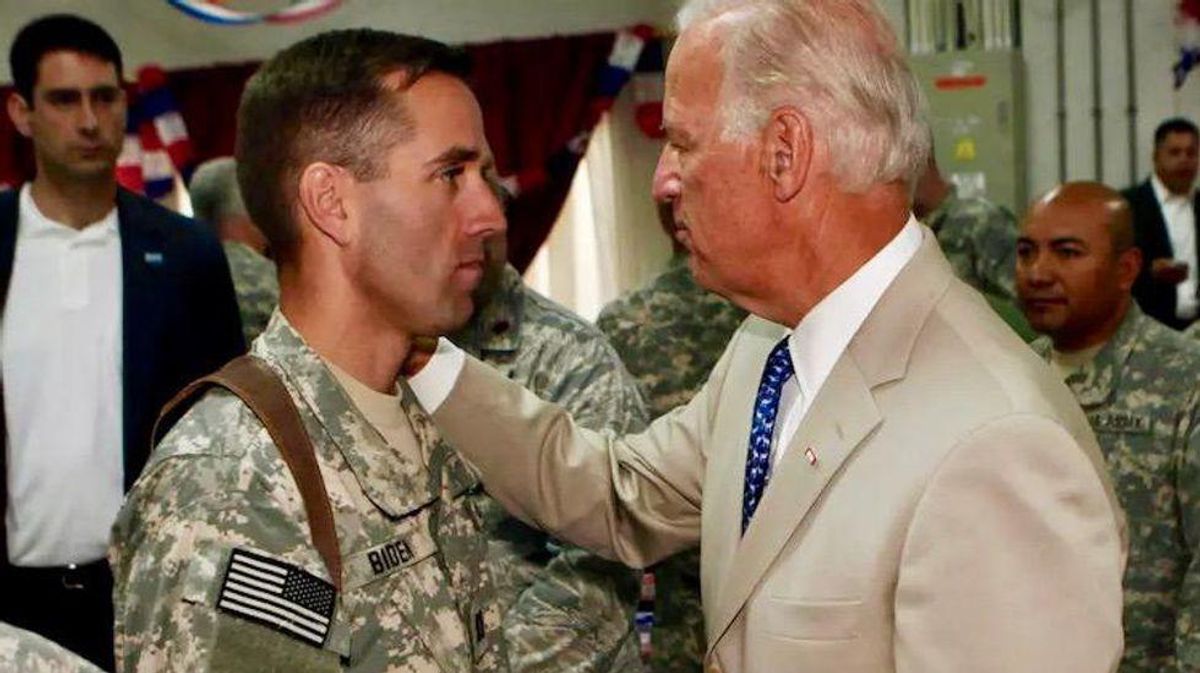 When President Joe Biden addressed the families of the 13 military members killed in Afghanistan last week he referenced losing his son Beau. It's a reference he frequently makes when addressing people who have lost loved ones and experienced profound grief. In response to the incident, New York Times reporter Peter Baker penned a report about those complaining that Biden grieves too much, and in this incident, it didn't make sense because Biden's son didn't die in combat.

As American Enterprise Institute scholar Norm Ornstein detailed in a thread that the grief of losing a child is "unfathomable." Biden lost two, one from cancer and one suddenly when he also lost his first wife in a car accident. Ornstein noted that frequently when he met with people who knew he'd lost his son, they'd explain they lost their cat or their 93-year-old mother. He was at first insulted that those could even be compared to the loss of a child.

"Then I realized that people are trying to be understanding and empathetic, and don't know how to react," explained Ornstein. "Of course, the most common is 'There are no words.'"

Losing a child is something few can fully understand, and Biden is one of them, so addressing families who lost their children is at the very least something he can empathize with and he can speak to with extensive experience.

A TIME report from March described a 2020 campaign stop in Ottumwa, Iowa, where a woman told Biden of her 9-year-old daughter's battle with cancer.

"Biden put both of his hands on Jennifer Stormbern's shoulders and whispered a message of comfort to her," the story described. "Her shoulders shook a little as Biden kept his voice low, presumably talking about his late son Beau, who had died four years earlier after a fight with brain cancer. I walked over to Stormbern after and asked her about the exchange. It was clearly an emotional moment for both her and the former Vice President in the hotel ballroom."

"He's a dad. And you never, ever get over a loss like that," she told the TIME reporter. That was one of the reasons she said she was paying attention to Biden because he could bring "decency" back.

That was different last week when families of the fallen soldiers met with Biden at the White House.

"When he just kept talking about his son so much it was just — my interest was lost in that. I was more focused on my own son than what happened with him and his son," said Mark Schmitz, a Trump voter whose 20-year-old son Jared was among the dead from the ISIS attack on the Afghan airport. "I'm not trying to insult the president, but it just didn't seem that appropriate to spend that much time on his own son."

"I think it was all him trying to say he understands grief," Schmitz also said, according to the Washington Post. "But when you're the one responsible for ultimately the way things went down, you kind of feel like that person should own it a little bit more. Our son is now gone. Because of a direct decision or game plan — or lack thereof — that he put in place."

During the 2016 campaign, there were several conversations about the Gold Star families because then-candidate Donald Trump belittled and insulted them. One, in particular, was an 8-day public feud between Trump and a Gold Star father.

After 500,000 deaths from COVID-19, Biden's emotional understanding and acknowledgment of the country's loss was a welcomed change after he was elected. But that is a dramatic difference from being a commander-in-chief who makes the calls that can determine whether soldiers live or die.

"Of course, not everyone is going to react the same way to others who try to comfort and empathize," explained Ornstein. "But there are likely literally hundreds, if not thousands, of people who have found immense comfort over decades from Joe Biden. That some do not is not a big news story. Every family that loses a child, including especially those who lose their children as they serve their country, deserves empathy and respect. Not everybody is going to react to an expression of sympathy with appreciation, and Biden's way may well offend some."

"But the effort on Fox et al to go after Biden on this, including claiming that he was so insensitive to the loss of the families of Marines that he looked at his watch over and over, is a common tactic-- attack his strength, his empathy, to undermine him," Ornstein concluded. Don't get taken in."

There are a great many things that Fox News and others could attack Biden on involving policy or politics, but attacking the grief he has for the losses he has experienced aren't going over well.

There is indeed a growing, concerted effort by hardcore partisans to untroop Beau Biden and polarize the way Joe Bi… https://t.co/wMFahkmFln
— southpaw (@southpaw) 1630855090.0

Sometimes you have to wonder why the NYT does what it does. The article about Joe Biden's grief and that some peopl… https://t.co/6iHZidzQBb
— Anita (@Anita) 1630794327.0

@peterbakernyt @katierogers Also, how much of this is just influenced by partisanship? It seems like those who are… https://t.co/QOQ8c9shFC
— Mangy Jay (@Mangy Jay) 1630856132.0

I have not lost a child so couldn’t figure out why I found these stories about how Biden processes grief so distast… https://t.co/H8ESilAnlG
— Juliette Kayyem (@Juliette Kayyem) 1630861109.0

There’s absolutely plenty to criticize Biden about, but choosing “he relates to other people’s grief through his ow… https://t.co/fxkmRNnEWf
— DemonicEntitiesHat (@DemonicEntitiesHat) 1630878504.0

There are just not enough words to describe how awful, abhorrent, outrageous & offensive the front page of the New… https://t.co/NKC9b5Ay03
— Charles Campisi (@Charles Campisi) 1630872984.0

@katierogers @fred_guttenberg @RepRaskin No way to spin the tasteless headline about a grieving person. If grief is… https://t.co/XhKWHbHpcr
— Cooper (@Cooper) 1630860997.0