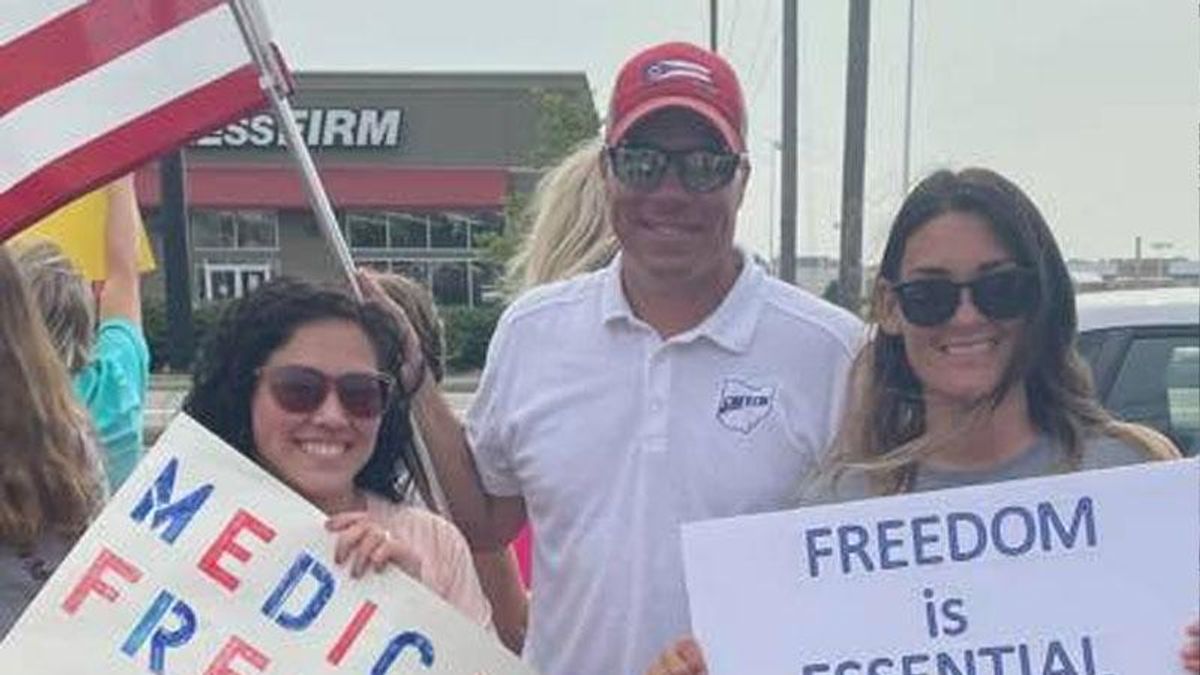 An Ohio House representative joined a protest last week outside a Miamisburg hospital that announced a requirement that caregivers receive vaccination against COVID-19.

This article was originally published at Ohio Capital Journal

Rep. Rodney Creech, R-West Alexandria, said he joined the demonstration because vaccines should be a matter of personal choice, and it's not an employer's place to require them.

In an interview, he denied any description of himself as anti-vaccine. However, he falsely claimed there's no evidence COVID-19 vaccines will save lives; said he's “100 percent" certain that COVID-19 deaths are overcounted; and said he's not putting any vaccine “poison" in his body.

A Cleveland Clinic study found 99% of patients admitted to the hospital with COVID-19 were unvaccinated — a finding that has proven consistent in statewide and federal data. Creech wasn't swayed.

“If those people are in the hospital, and they chose not to be vaccinated, I support them," he said. “It's personal choice, it really comes down to their choice. Maybe they feared the vaccine more than they do getting deathly sick from the virus."

Creech joined a protest outside administrative offices of Kettering Health, one of three related protests outside hospitals that opted to mandate COVID-19 vaccination for staff. Hundreds joined the protests, wielding signs like, “We don't need no vaccination, we don't need no forced control."

He said he expects an exodus of nurses and doctors in coming weeks as they refuse to receive vaccination. Although the employer mandate revolved around the relationship between employee and employer, Creech described the policies as government control.

“The government is letting everyone do their dirty work," he said. “That's what employer mandates are."

Creech is a first-term legislator, representing Preble County and part of Montgomery County.

A Kettering Health spokeswoman said in a statement the hospital respects the rights of individuals to assemble and peacefully protest, and that “we continue to have productive conversations with our colleagues as we navigate this next phase of responding to the COVID-19 pandemic."

This antagonistic relationship to COVID-19 vaccination is not unique among the Ohio General Assembly. Earlier this year, lawmakers passed legislation prohibiting schools and universities from requiring students take any vaccine that has not yet received full approval from the U.S. Food and Drug Administration — the three available COVID-19 vaccines are available under an emergency use authorization, a streamlined regulatory approval used during a health crisis.

The House Health Committee is also considering broader legislation that would outlaw vaccine mandates from any employer, including hospitals and nursing homes. It would also prohibit insurers, governments and others from incentivizing or asking about one's vaccination status.

House Health Chairman Scott Lipps, R-Franklin, scheduled the bill for another hearing later this month before the full House reconvenes. Last year, he spoke to an anti-vaccine special interest group and requested their help to “stop this vaccine shit" that's coming.

More than 63,000 Ohioans have been hospitalized with COVID-19 since the pandemic began, and more than 20,600 have died. Slightly more than 61% of Ohioans have received vaccination against the disease, even as a more transmissible variant of the virus that causes it has sparked a resurgence.

In a Facebook livestream of the Kettering protest, a woman can be heard noting that the Proud Boys were in attendance. The Proud Boys are a far-right, all male gang known to engage in street fights with liberal protesters at political events. On Jan. 6, some of their members were among the first to enter the U.S. Capitol in an attempt to thwart certification of the presidential election, and they face some of the most serious criminal charges of the day.

Other Proud Boys members in Columbus also partook in two brawls that day outside the Ohio Statehouse.

An email affiliated with the Proud Boys of Cleveland did not respond when asked to confirm if members attended the vaccine protest.

Creech said he had never heard of them.

“I have no idea what you're talking about," he said. “I've never heard of the Proud Boys. I haven't watched the news since Jan. 6, and I'm not going to."