The postcards and posters from most Winter Olympics call attention to the thick powder and ice-covered mountains we expect from winter mountain sports. But this year will be a little different. 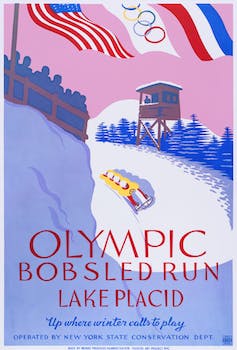 Most Winter Olympics call to mind snow-covered mountains and forests.

Social media posts from some of the athletes training at the Yanqing zone, about 75 kilometres northwest of Beijing, show a thin ribbon of white snow surrounded by brown mountains. Yanqing and Zhangjiakou, the two sites chosen for the skiing, snowboarding, bobsledding and luge events (among others), lack natural snowfall, making Beijing 2022 the first Winter Olympics to be held entirely on machine-made snow.

But as temperatures continue to rise globally, it’s also a glimpse at what future Winter Olympics might look like. Climate change is an ongoing challenge for all contemporary winter sports.

Popular summer training venues, such as Whistler’s Horstman glacier , are rapidly melting away, and World Cup ski competitions, including a recent slalom event in Zagreb, Croatia, are being cancelled due to unusually warm temperatures and unsafe snow conditions.

As a climate scientist and former elite ski racer, I’m not only interested in which venues will have enough snow to host races in the future, but whether they will be safe for competitions. Some athletes may skip races they deem too dangerous, but the Winter Olympics, considered by many to be the pinnacle of sport, is where athletes put themselves on the line in hopes of winning a gold medal. As one participant in our study noted, “Who’s going to qualify for the Games and then sit it out?” 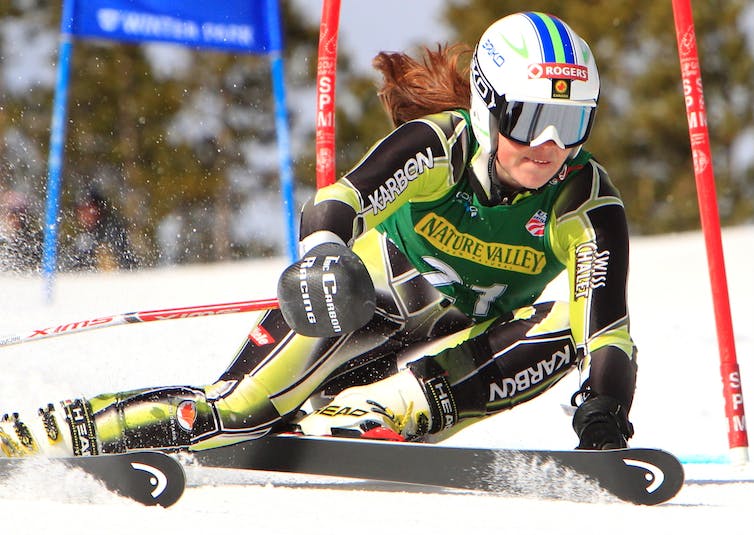 Before author Natalie Knowles became a climate scientist, she competed on Canada’s Alpine Ski Team at the World Junior Championships and World University Games, and raced for the University of Denver.

Even with top-of-the-line snow-making systems in place, recent Olympics have had to resort to last-minute adaptations, such as helicoptering in snow, building jumps and halfpipes out of plywood and hay bales or cancelling pre-competition training.

These improvisations allow the event to go ahead, but they can put athlete safety and performance at risk. When skiers streak down a mountain at 150 kilometres per hour or a snowboarder lands a triple cork in a superpipe, they expect to be competing on consistent, safe and fair conditions.

Cold temperatures allow for a smooth and firm surface, whereas warm temperatures lead to soft and wet snow that degrades throughout the competition and hinders athletes’ performance. Warm conditions can increase the risk of injuries. 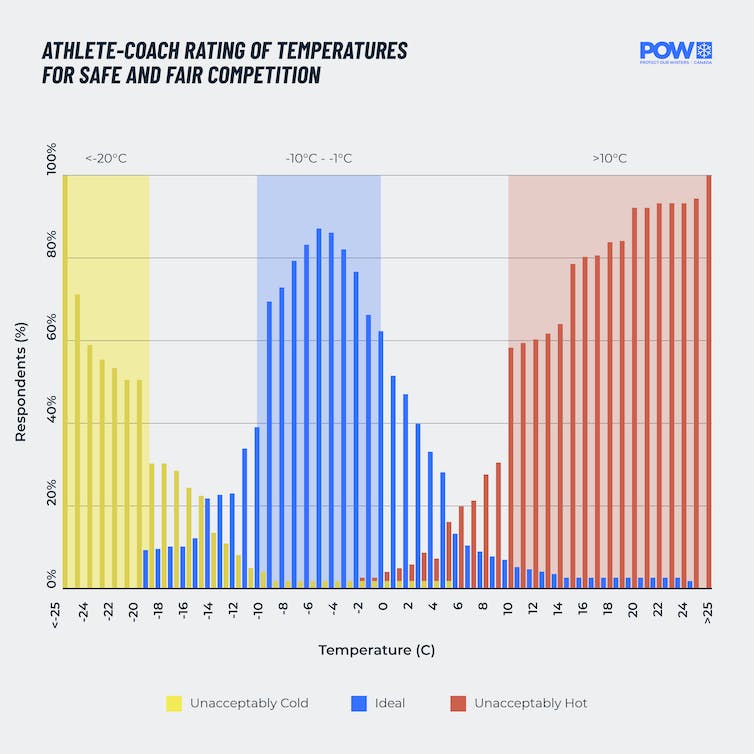 Ahtlete-coach rating of temperatures for safe and fair competition.

One downhill skier in our study said, “Heat can just create dangerous conditions. Lots of torn knee ligaments happen in sloppy wet snow.” Freestyle snowboarders noted that “too warm is the worst because it makes the course super slushy, the speed slows down and you get a bunch of bomb holes in the landings, which are unsafe.” Nordic skiers added dehydration and heat stroke as additional risks from hot temperatures.

Warm temperatures can also compromise the integrity of the competition: the first athlete may get a smooth un-tracked surface, while the 30th or 50th competitor must contend with the bumps and ruts carved into the track from the previous participants.

Previous research used climate thresholds, including minimum snow coverage and maximum temperatures, to identify whether it would be feasible to hold a Winter Olympics at a former venue in the future — that is whether a venue could operate under warmer conditions. 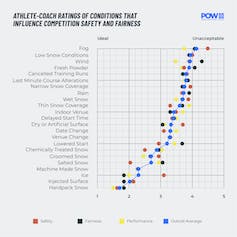 Athlete-coach ratings of conditions that influence competition safety and fairness.

My colleagues and I went further. We incorporated the perspectives of 339 athletes and coaches from 20 countries to determine whether a venue could hold a safe and fair competition in a warmer world.

Our study included more nuanced and qualitative characteristics of conditions such as wet snow, rain, wind, fog and machine-made snow, as well as common adaptations such as altering course starts, cancelling training or chemically treating the snow surface to try to maintain frozen winter-like conditions. Using the input of athletes and coaches, we modelled these climate thresholds in all the current and former Olympic Winter Games locations to determine which ones would remain viable in the future.

The results are both daunting and encouraging. If greenhouse gas emissions continue to rise under a so-called “business as usual” scenario, only one former Olympic host, Sapporo, Japan, will remain a reliable place to host outdoor winter sports by 2080.

But if we can reduce global emissions to achieve the Paris Agreement target of 2 C by following low-emission pathways, eight of the 21 former Winter Olympic locations will continue to have the cold temperatures and snow quality necessary for elite level snow sports. 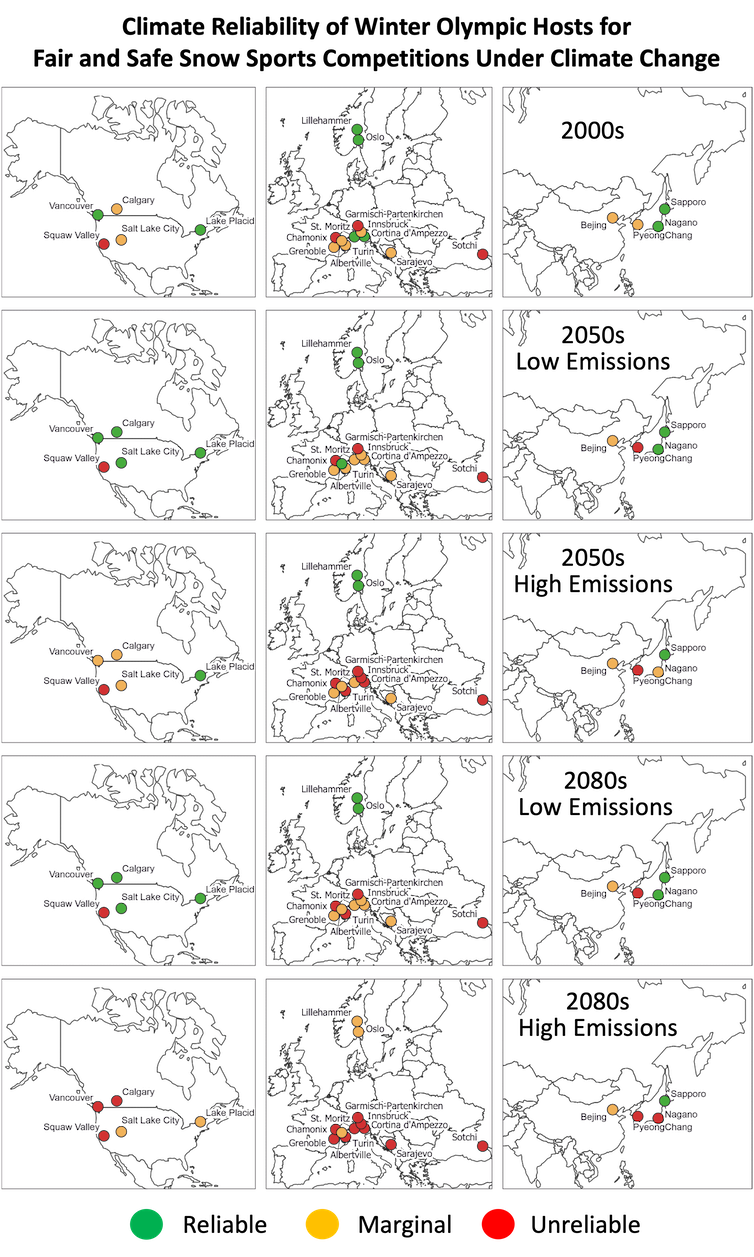 Some sporting events, such as international ski and snowboard championships, only need suitable conditions for one or two sports. They also have a range of adaptation options, such as postponing the event or changing venues at the last minute. But the Olympics are planned years in advance with limited opportunity to delay competitions or alter venues if the weather is poor. 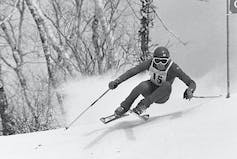 Mike Lafferty, from the U.S. Olympic Team, trains on the Mt. Eniwa track at the Sapporo 1972 Winter Olympics in Japan.

The fate of the Winter Olympics may seem low on the list of priorities as climate-related disasters fill the news, but the Olympics have always provided a beacon of hope. The International Olympic Committee has shown climate leadership among sporting organizations to achieve carbon neutrality and use sport to unify global citizens for climate action.

Yet competing at the Olympics and addressing climate change may have more in common than we might at first think. Both demand incredible feats of strength, endurance and ingenuity to overcome obstacles and to achieve what seems impossible.