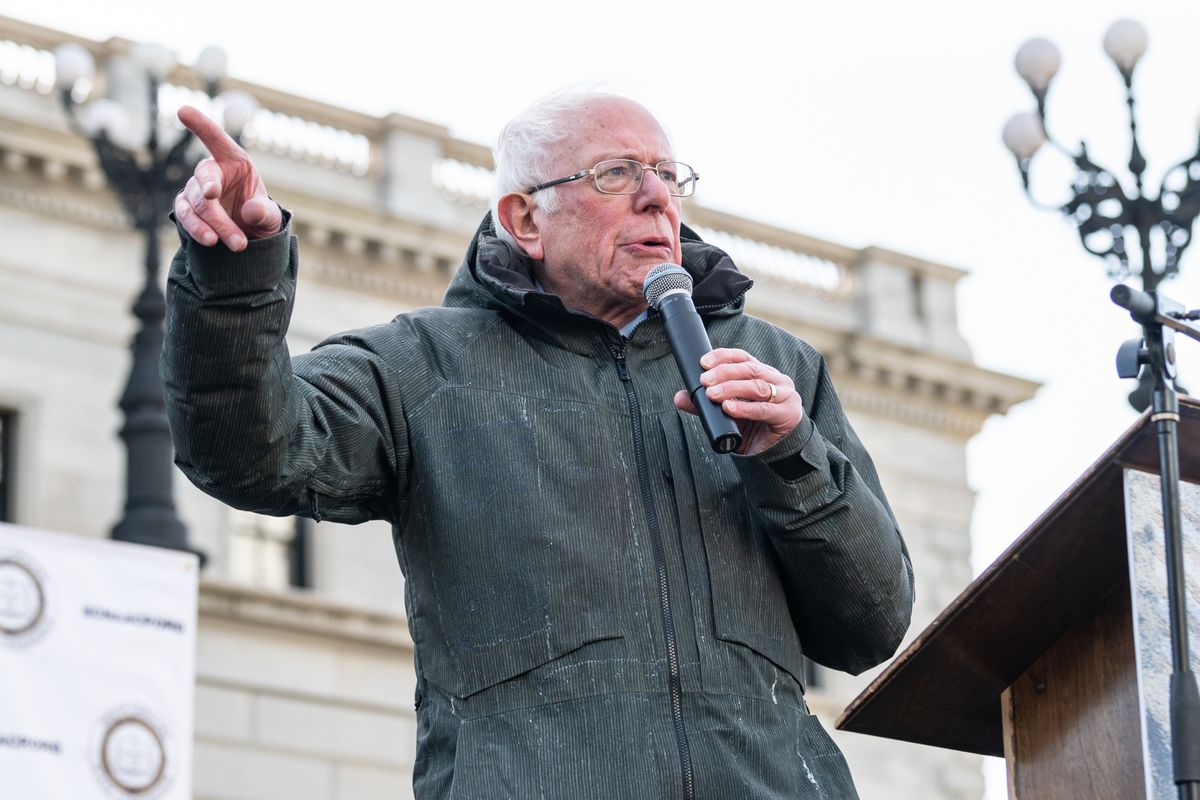 "Nina will stand with me in saying that today, we've got to expand Medicare to cover dental, hearing aids, and eyeglasses," said the Vermont senator. "But Nina knows... that we have got to go further than that, and join every other industrial country—guarantee healthcare to all through a Medicare for All, single-payer program."

Sanders went on to note "the incredible amount of money that the powerful special interests of this country are spending trying to defeat Nina." As The Intercept reported earlier this week, well-heeled donors "with long histories of support for Republican candidates" are bankrolling Brown's campaign either directly or through Democratic Majority for Israel (DMFI), a political action committee that has resorted to falsely portraying Turner as an opponent of a higher minimum wage, universal healthcare, and immigration reform.

"Why is it that the drug companies, the insurance companies, the fossil fuel industry, and Wall Street, and people who supported Donald Trump are pouring millions of dollars into this campaign to defeat Nina Turner?" Sanders asked Saturday. "And the answer is pretty simple: They know that when she is elected, she is going to stand up and take them on in the fight for justice."

GET OUT THE VOTE OHIO: NINA TURNER FOR CONGRESS (LIVE AT 11:30AM ET) www.youtube.com

"She represents the best of love, of freedom, of wounded-healing, of joy-spreading, and that is a moral and a spiritual achievement that's not just about politics," West continued. "And that's why we can say to some of our brothers and sisters who are part of the corporate wing of the Democratic Party with their milquetoast neoliberalism: We want vision, integrity, we want a focus on the least of these, the poor, the working class, everyday people."

The special election to fill the seat left vacant by former Rep. Marcia Fudge—who is now serving as head of the Department of Housing and Urban Development—has become a proxy battle between national progressive forces and the Democratic establishment, which has thrown its support behind Brown in the waning days of the campaign.

A former Ohio state senator, Turner has also racked up endorsements from local lawmakers and the state's largest newspaper, the Cleveland Plain Dealer.

According to OpenSecrets, the special election is shaping up to be the most expensive House race of the year. Turner "has held a consistent fundraising lead, raising $3.8 million total," the outlet noted last week in an analysis of campaign finance data. Turner's campaign has touted its strong support from small-dollar donors.

As the Cleveland Plain Dealer reported last weekend, "much of Brown's support this election has been aided by the Israel lobby."

"Aside from DMFI PAC, more than $536,000 of Brown's total fundraising has come through Pro-Israel America PAC," the newspaper observed. "Another pro-Israel PAC, NORPAC, has collected around $49,000 for Brown."

In her speech at Saturday's rally, Turner declared that her "people-centered agenda has some people very afraid," pointing to the super PACs attacking her campaign.

"Why are they spending all that money on little ol' me? I just want to know. Inquiring minds want to know," Turner said. "And I'm so glad you asked. They like the way things are now. They like it that so few people have so much and so many people have so little. They like a healthcare system that lets them pick our pockets or our pocketbooks and people can't get healthcare. They profit from a system of tax cuts for the rich. They do not want an America as good as its promise, and they are investing millions to ensure that our voices are silenced."

"Well let me tell you something 11th congressional district," Turner continued. "We're going to make sure that they understand that big money can't defeat big ideas and conscious-minded people."

Following the rally, Turner, Sanders, West, and Ellison led a march to the polls, which are currently open for early voting.