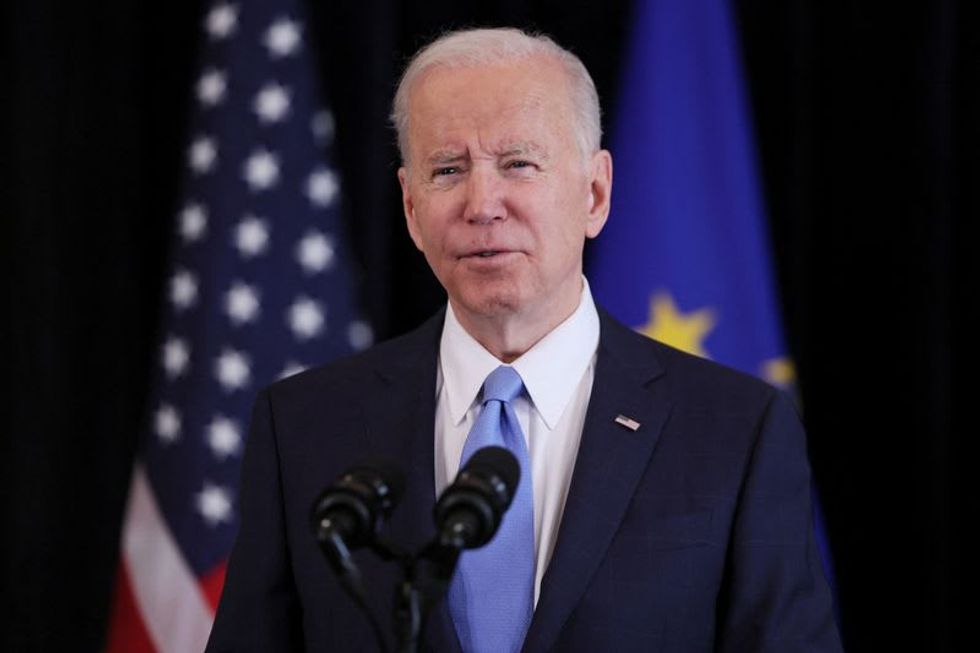 By Jarrett Renshaw and Karol Badohal

U.S. President Joe Biden spoke with top Ukrainian government officials in Warsaw on Saturday, and branded Russian President Vladimir Putin a "butcher" during a meeting with refugees who have fled the war in Ukraine to the Polish capital.

On the second day of a visit to Poland, Biden dropped in on a meeting between Ukrainian Foreign Minister Dmytro Kuleba and Defense Minister Oleksii Reznikov, and Secretary of State Antony Blinken and Defense Secretary Lloyd Austin.

"President Biden said what is happening in Ukraine will change the history of the 21st century, and we will work together to ensure that this change is in our favour, in Ukraine's favour, in the favour of the democratic world," Kuleba told Ukrainian national television

After a separate meeting with Polish President Andrzej Duda, Biden reiterated Washington's "sacred" commitment to security guarantees within NATO, of which Poland is a member.

Ukraine is not a member of the Western military alliance, and the United States is wary of getting dragged into direct confrontation with Russia, but Washington has pledged to defend every inch of NATO territory.

The White House said that in a speech in Warsaw later on Saturday, Biden "will deliver remarks on the united efforts of the free world to support the people of Ukraine, hold Russia accountable for its brutal war, and defend a future that is rooted in democratic principles".

In Warsaw, Biden also visited a refugee reception centre at the national stadium. People, some waving Ukrainian flags, lined the streets as his motorcade wound its way towards the stadium.

After being greeted by celebrity chef Jose Andres, Biden talked to refugees who had gathered to receive food from the World Central Kitchen NGO, asking their names and hometowns and posing for pictures with some.

More than 2 million people have fled the war to Poland. Altogether, about 3.8 million who have left Ukraine since fighting began on Feb. 24.

Asked about the impact that Putin's decision to invade Ukraine had had on the Ukrainian people, Biden said the Russian leader was a "butcher".

Standing outside the stadium, Hanna Kharkovetz, a 27-year-old woman from the northern Ukrainian city of Kharkiv, expressed frustration that the world was not doing more to help.

"I don't know what he wants to ask us here. If Biden went to Kyiv ... that would be better than speaking here with me," she said as she waited to register her mother for a Polish national ID number.

The invasion of Ukraine has tested NATO and the West's ability to unite.

Poland was under communist rule for four decades until 1989 and was a member of the Moscow-led Warsaw Pact security alliance. It is now part of the European Union and NATO.

The rise of right-wing populism in Poland in recent years has put it in conflict with the EU and Washington, but fears of Russia pressing beyond its borders has drawn Poland closer to its Western allies.

Biden's election put the nationalist Law and Justice government in an awkward position as it had set great store in its relationship with his predecessor, Donald Trump.

But as tensions with Russia rose before it invaded Ukraine, Duda appeared to seek to smooth relations with Washington. In December, he vetoed legislation that critics said aimed to silence a U.S.-owned 24-hour news broadcaster.

Biden and Duda were expected in their meeting to address a disagreement over how to arm Ukraine with warplanes, and other security guarantees.