‘Freedom will triumph over tyranny’: Biden’s first State of the Union echoes themes from the Cold War

The Conversation
Presenting a unified front. Saul Loeb-Pool/Getty Images
It was a familiar scene.

The president of the United States strode down the aisle of the U.S. House of Representatives to deliver the State of the Union address, the only constitutionally mandated instance of presidential speech. Usually, it serves to lay out the White House’s policy agenda for the coming year, along with perceived accomplishments.

But as the nation tuned in for the prime time address on March 1, 2022, President Joe Biden had to do more than simply outline key domestic priorities such as relaxing COVID-19 restrictions for a pandemic-weary public, addressing the highest inflation rate since 1980, touting his nomination of the first Black woman to the nation’s highest court and mobilizing the Democratic party ahead of the 2022 midterm elections.

On top of this, Biden also had to respond to an international crisis he did not choose, and one that could come to define his presidency: Russian president Vladimir Putin’s invasion of Ukraine.

With horrifying images from Kyiv and Kharkiv circulating on social media and a rising death toll of Ukrainian citizens, Biden sought to articulate how the state of the union was linked to the current state of the world – and democracy’s ability to survive in that world.

As a scholar of Cold War presidential rhetoric, I know Biden’s choice of words echo themes of past chief executives who spoke to Americans amid tension in Eastern Europe.

In this, his first State of the Union address, Biden spoke of national unity at a time of deep political polarization. He reminded his audience that they shared “a duty to one another, to America, to the American people, to the Constitution … [and] an unwavering resolve that freedom will always triumph over tyranny.”

By stressing a shared commitment to seeing freedom triumph over tyranny, Biden tapped into a common refrain of U.S. foreign policy rhetoric.

This theme was especially prevalent during the Cold War. President Harry S. Truman argued that the nation had a duty and responsibility “to support free peoples who are resisting attempted subjugation by armed minorities or by outside pressures.” Later, Ronald Reagan held up the United States as “a beacon … [and] a magnet for all who must have freedom.”

Biden also celebrated the courage and conviction of the Ukrainian people.

Just as John F. Kennedy declared in 1963 that “all free men” could identify as citizens of West Berlin, a city surrounded by a tyrannical government, Biden praised Ukrainian President Volodymyr Zelenskyy and “every Ukrainian” for “their fearlessness, their courage, their determination, [that] literally inspires the world.”

Indeed, the visual and embodied symbols of Ukrainian resistance filled the House Gallery, with some members of Congress dressed in yellow and blue – a deliberate nod to the vivid colors of the Ukrainian flag. Ukraine’s ambassador to the United States, Oksana Markarova, was seated next to first lady Jill Biden in the balcony. 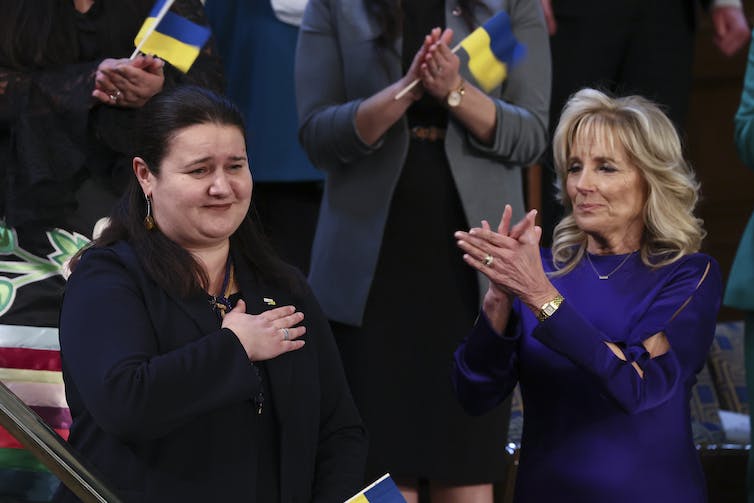 These references underscored what Biden described as Putin’s attempt to “shake the very foundations of the free world” and belief that he could “make it bend to his menacing ways.” But the Russian president had badly miscalculated, Biden said. “He thought he could roll into Ukraine and the world would roll over. Instead, he met a wall of strength he never anticipated or imagined.”

By focusing on Putin’s unprovoked attack on democracy, Biden shifted the focus from partisan infighting and political division to a unifying theme around which his entire audience could rally: a renewed commitment to defending the “free world.” Indeed, the more than hour-long speech was light on criticism of Republicans, with no mention of Donald Trump nor the attempted insurrection at the U.S. Capitol just over a year ago. Rather, just like during the height of the Cold War, Biden chose to stress the values that have historically united Americans.

To close, Biden declared that the “state of the union is strong – because you, the American people, are strong.”

This was America’s “moment of responsibility,” its “moment to meet and overcome the challenges of our time … as one people.”

Although presidents almost always comment on the strength or health of the nation, this particular articulation also bore a striking similarity to another president, Ukrainian President Zelenskyy who just days earlier declared that “each of us is the president … because we are all responsible for our state.”

For both Biden and Zelenskyy, the strength of the nation – and the survival of democracy – was defined by individual citizens, not an isolated leader desperate for power and determined to elevate their own image.

[Too busy to read another daily email? Get one of The Conversation’s curated weekly newsletters.]