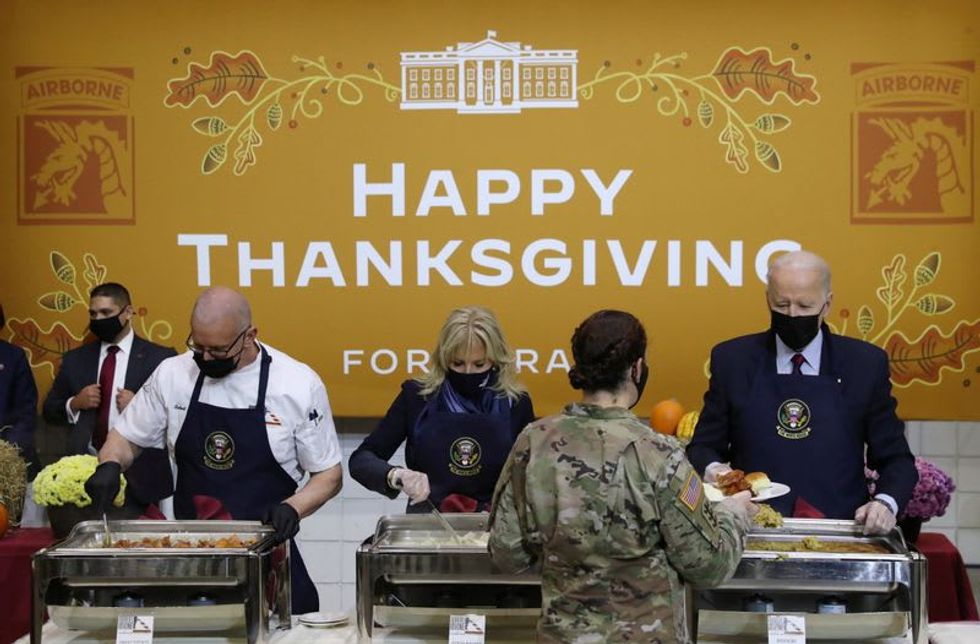 WASHINGTON (Reuters) - President Joe Biden and his wife Jill will travel to Nantucket, an island off the coast of Massachusetts, on Tuesday to spend Thanksgiving with their family, resuming a decades-long tradition that was interrupted last year due to the pandemic.

Biden has celebrated Thanksgiving on Nantucket nearly every year since 1975. The island, about 30 miles (48 km) south by ferry from Cape Cod, has long been a favored vacation spot of the wealthy, though more during the summer months than Thanksgiving.

Biden broke with family tradition in 2015, after the death of his son Beau from brain cancer and in 2020 after his election as president because of the pandemic when he followed public health guidance to avoid travel and large gatherings.

The President spoke about reuniting with family this Thanksgiving in remarks earlier this month while encouraging people to take their COVID-19 vaccines.

"Last Thanksgiving, for the first time, it was just four of us - my wife and I, our daughter and her - and my son-in-law. Later this month, our tables and our hearts are going to be filled, thanks to the vaccines."

On Monday, the president and the first lady helped serve Thanksgiving meals to U.S. troops at Fort Bragg, North Carolina, thanking them for their service and dedication to country.

Biden chose to visit U.S. forces within the United States rather than go abroad, unlike his predecessors, since he has withdrawn troops from Afghanistan and is set to end the U.S. combat mission in Iraq by year's end.

Former presidents including Donald Trump, Barack Obama and George W. Bush all traveled to visit troops in either Iraq or Afghanistan during the holiday season.

Americans are gearing up to celebrate the annual holiday amid rising food and gas prices as the pandemic snarls global supply chains and the economic drag from the summer wave of COVID-19 infections fades.

The American Farm Bureau Federation said last week the annual Thanksgiving dinner will cost U.S. consumers an average of 14% more this year in the biggest annual increase in 31 years, though shoppers can still find deals in grocery stores.

(Reporting by Nandita Bose in Washington; Editing by Chizu Nomiyama)