Blue light: what we do and don’t know about the damage it causes our skin

The Conversation
Woman looks at her phone (Shutterstock)

Take a wander down the skincare aisle of any health and beauty retailer and you’ll be met with a bewildering array of creams and sprays, promising to protect you from various threats to your skin.

You might have noticed skincare companies claiming their products can protect you from the effects of blue light. If you hadn’t thought about blue light before, you’d be forgiven for worrying about whether you should be concerned.

First you need to understand what blue light is.

Visible light accounts for 50% of the sunlight spectrum and, as the name suggests, it’s the only part of light that can be detected by the human eye. The blue band of this visible spectrum has a particularly high energy level.

Blue light is all around you. The sun emits blue light. So do fluorescent and incandescent light bulbs, mobile phones, computer screens and flat screen televisions.

What are the risks?

There is mounting evidence that blue light can have a harmful effect on the skin and eyes and disrupt the circadian rhythm (your internal clock). Typically, studies investigating the impact of sun radiation on the skin have focused on ultraviolet radiation, particularly UVB, which is responsible for sunburn. The most frequently reported effect of blue light exposure is a significant increase in reactive oxygen species (ROS), highly reactive chemicals formed from oxygen. Too much ROS can damage your DNA and key enzymes such as those responsible for DNA repair, increasing your risk of cancer.

Our research showed blue light can induce pigmentation (tanning) across skin types. While many people consider a deep tan a desirable trait, it is a marker of skin damage and ROS. Others researchers found skin tans from visible light (which includes blue light) had darker pigmentation that lasted longer compared to ultraviolet radiation exposure. Our studies also showed blue light can activate genes associated with inflammation and photoageing (skin damge). Several studies have proved typical sunscreens do not prevent blue and visible light damage.

While blue light appears to be less potent than ultraviolet radiation, this may be accounted for by the relatively larger amounts of blue light that reach the Earth. UVR accounts for around 5% of solar radiation in the UK at midday in the summer. Blue light makes up around three times more at 15%. 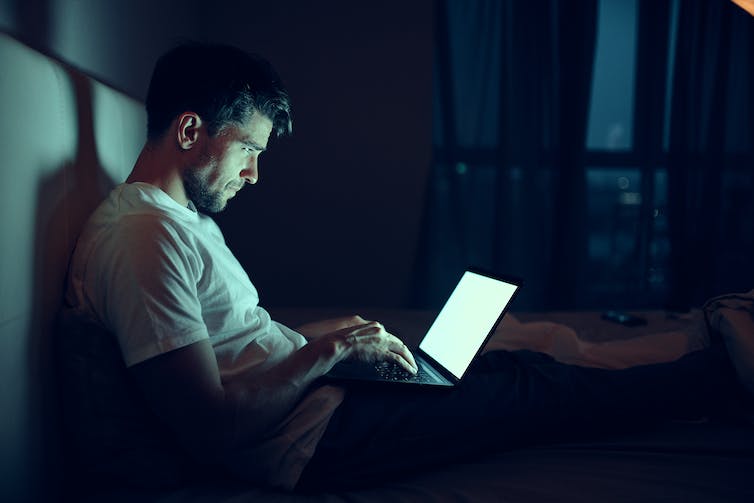 We are all exposed to more blue light than ever before.Shutterstock

Blue light can damage the skin but it’s less clear which sources of blue light are harmful to humans. The blue light from screens is responsible for a fraction of the blue light doses we get. Research has shown screens from devices can increase ROS production. However, a study by German skincare manufacturer Biersdorf found that an entire week’s worth exposure to blue light from a screen at a distance of 30cm is equivalent to just one minute of midday summer sun in Hamburg, Germany. Another study found blue light from screens were 100 - 1,000 times less intense than blue light from the sun. It also failed to trigger melasma, which causes patches of skin discolouration, in patients who have the condition. It’s true we are spending more time in front of screens than ever before but while screens may cause some damage, it’s insignificant compared with sun exposure.

The cosmetics industry has started developing a wide range of skincare products that brands claim prevent blue light damage. However, there is no regulated or standardised test to assess a product’s ability to prevent blue light damage. Companies do carry out scientific tests on these products. But they can use any number of assessments in their work. This is very different from the regulations around sunscreen that claim to contain Sun protection factor (SPF).. SPF testing is closely regulated by the International Organization for Standardization (ISO). All products that claim to contain an SPF undergo an identical testing regime.

The lack of regulation for blue light claims makes it impossible for consumers to make informed choices about the level of protection offered and differences between products. This lack of regulation is unlikely to be dangerous for consumers, but the benefit from the products may be limited. Given the evidence around blue light emitted by screens, it’s worth applying scepticism to any claims that a product is needed to prevent damage from your computer screen or phone.

Traditional photoprotection products (such as sunscreens) don’t typically protect you from blue light damage. It’s encouraging the skincare industry is trying to address this need. But it is crucial that governments take the next step in the process and develop industry-wide, standardised testing. In the meantime, it is important to remember to limit any exposure to the sun. The use of sunscreens (or any product containing an SPF rating) have been proven to prevent skin cancer and photoageing, and products advertising blue light protection may give an additional benefit.