Rep. Lauren Boebert of Colorado, a right-wing Republican and prominent member of the "Sedition Caucus," frequently speaks about her upbringing in a family struggling with poverty, describing herself as a "welfare child." Boebert has even blamed the liberal ideals held by her mother as the reason why her family was poor and required government assistance during her childhood.

But both in Washington circles and in speaking to voters in her Colorado district, Boebert has not discussed in detail exactly what circumstances landed the future right-wing firebrand and her mother in this disadvantaged situation. An investigation by Salon suggests that it had less to do with liberal ideology and more to do with her mother's failure to obtain the child support payments to which she was rightfully entitled.

Boebert's mother, Shawn Roberts Bentz, tried valiantly for years to receive child support. — and it appears likely that she and her daughter fell victim to a corrupt phlebotomist, a professional wrestler turned deadbeat dad and a negligent North Carolina child support system that allowed Bentz's case to slide through the cracks.

Boebert has occasionally been asked what role her biological father played in her family's struggles, and has repeatedly declined to answer. Exactly who her father was, in fact, remains officially uncertain: No father's name was listed on her 1986 Florida birth certificate, nor in the local newspaper's birth announcement.

But both Boebert and Bentz apparently believe that her father is Wallace Stanfield Lane, a former North Carolina pro wrestler known in the trade as "Sweet" Stan Lane — and there is significant evidence to back up that theory.

Boebert and her mother believe that Lane may have engaged in fraud regarding a paternity test he took more than 30 years ago that appeared to rule him out as Boebert's father.

Karen Weary, the North Carolina phlebotomist who took Lane's blood sample in July of 1990, was convicted of switching samples in a different case. Once child support services in North Carolina found out about this, they were mandated to notify everyone involved in Weary's cases and retest all the samples she had taken that excluded fathers.

But Boebert's mother was never notified, and Lane was never retested.

As her birth certificate makes clear, Lauren Opal Roberts was born in Orlando, Florida, on Dec. 19, 1986. Her mother, Shawn Elaine Roberts, was 18 years old and unmarried. As mentioned above, no father was listed either on the birth certificate or in a birth announcement published a few weeks later in the Orlando Sentinel.

(Record above obtained by Salon.)

Two months after Boebert's birth her mother opened a child support case against Wallace Stan Lane, who, under the name "Sweet" Stan Lane was a member of at least two pro wrestling tag teams, the Midnight Express and the Fabulous Ones.

Over the course of Salon's reporting on the matter, MEL Magazine published a detailed report on Lane and the paternity dispute, nailing down many of the details also used in this story. Lane was a prominent professional wrestler who performed several times in central Florida around the time of Boebert's conception in early 1986. He was 33 years old when Boebert was born, and by all accounts was financially solvent. (He also had a reputation in the wrestling game as a ladies' man.) 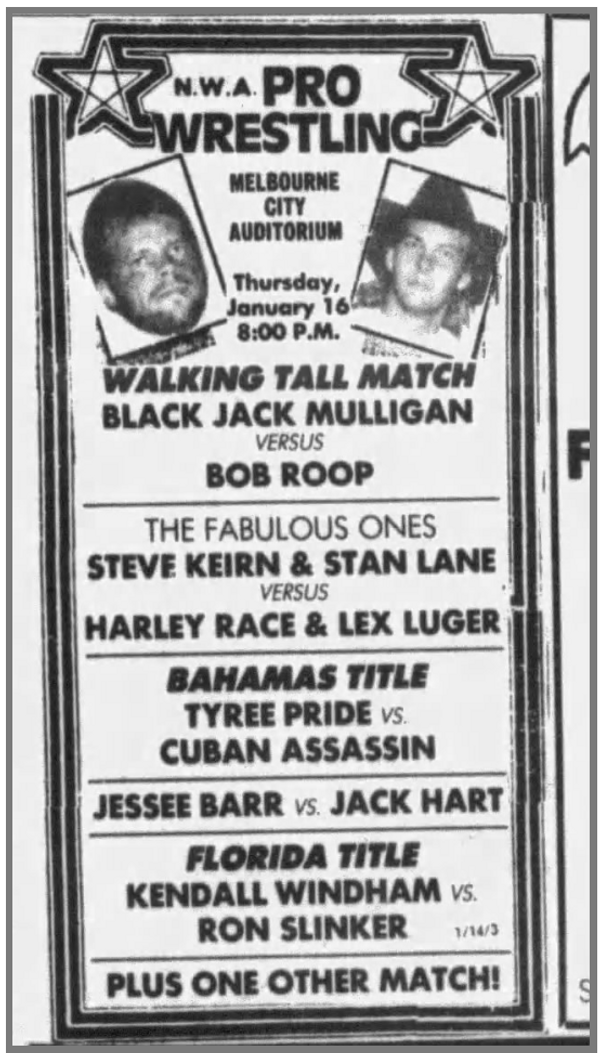 Shawn Roberts' child support case was first filed in Orange County, Florida, where Lauren had been born, but was then moved to nearby Seminole County, where Lane was eventually ordered to pay child support of $100 per week or $430 per month. At the time of the judgment, Boebert's mother was working full-time at a convenience store called Handy Way for $4 an hour, then the minimum wage. Her average take-home check would have been about $650 a month, which even 30-plus years ago was well below the federal poverty line. (The extra $100 a week would have put Roberts and her daughter just above that level, in 1987-88 standards.)

It appears that Lane made few, if any, of those mandated child support payments, although his pro wrestling career continued and there's no evidence he was in financial distress. Lane admitted he had had sexual relations with Roberts, according to court records reviewed by Salon, and Roberts swore in an affidavit that she had not had sex with anyone other than Lane at the time her daughter was conceived.

Roberts finally had papers served on Lane that compelled him to take a paternity test, which he did in the summer of 1990, when Lauren was 3 years old. That test, administered by the above-mentioned Karen Weary, appeared to rule out Lane as the girl's father. So the child support case was closed, and Lane was no longer required to pay Shawn Roberts anything.

That, however, was not the end of the story.

In both cases, Weary collected a sample at the Department of Child Support Enforcement and then delivered it to a company called Genetic Design for testing. This story became big news in North Carolina in 1993 when Weary's corrupt scheme was exposed, but by then Roberts and her daughter had moved from Florida to the Denver area and never learned of it. They also never learned that Genetic Design offered "to retest, at no cost," all samples drawn by Weary that excluded a man from a paternity case. Weary, also known as Karen Best Sherow, died in 2012, before Lauren Boebert or her mother discovered Weary's involvement in criminal blood-sample switching.

In October 2012 Boebert's mother, who by then was known as Shawn (or Shawna) Roberts Bentz and lived in Rifle, Colorado, contacted the North Carolina State Bureau of Investigation to ask for an investigation of Lane, whom she believed was shirking his responsibilities. Records indicate that throughout 2013 Bentz contacted numerous other agencies, including the Mecklenburg County District Attorney, the Charlotte-Mecklenburg Police Department, and court clerks in both Mecklenburg County, North Carolina, and Seminole County, Florida, asking that Lane's case be reopened on the matter. She could not rouse the bureaucracy in any of those agencies to pay attention.

Her father is Stan Lane a former professional wrestler who at that time was a member of the tag team The Fabulous Ones. When Stan learned I was pregnant, he encouraged me to have an abortion and said that the child would be damaged because of the steroids he had taken. … Stan did end our relationship when he learned I was pregnant and soon fled the state of Florida.

Bentz's letter, reproduced below (with some of her personal information redacted), includes a number of other compromising or incriminating details about Lane's 1990 paternity test, including the suggestion by Charlotte newspapers that Karen Weary may have falsified numerous other tests and the fact that the photograph used to identify Lane at the time appeared to be a staged publicity shot rather than a candid portrait. Bentz also included a letter from Cindi Straughn, a cousin of Stan Lane's, who wrote to Lane urging him to cooperate and saying that Straughn believed Lauren Boebert to be his daughter.

Despite Bentz's considerable efforts, Stan Lane — long retired from pro wrestling and more recently an announcer for speedboat races — has never taken a second paternity test and has continued to insist that Lauren Boebert, now a nationally known figure in conservative politics, is not his child.

Boebert's congressional office did not return a request for comment on this story. Salon's attempts to reach Shawn Roberts Bentz and Stan Lane for comment were unsuccessful.