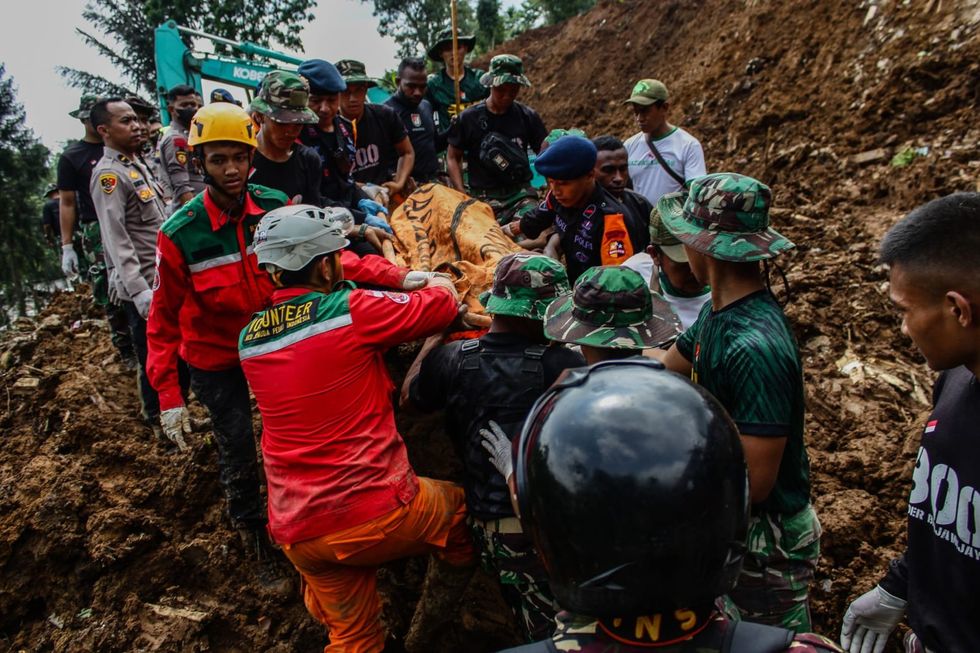 Emergency personnel evacuate a victim of a landslide in the aftermath of a deadly earthquake in Selakawung Village, Cianjur. The death toll from a magnitude-5.6 earthquake in Indonesia rose sharply to 268, with 151 still missing, according to the country's disaster management agency, as President Joko Widodo promised to rebuild homes damaged by the disaster Algi Febri Sugita/ZUMA Press Wire/dpa

A 6-year-old boy was rescued from rubble two days after a magnitude-5.6 earthquake devastated a district in Indonesia's West Java province, leaving at least 268 dead, a rescue official said Wednesday.

The boy, named Azka, was found alive under the ruins of a house in the Nagrek village of Cianjur district on Wednesday morning, about 40 hours after Monday's quake, said Aman Riyanto, a fireman who took part in the rescue.

"He was still breathing. Thank God he was safe and immediately received treatment," Riyanto said.

Many of those killed in the disaster were children attending religious classes in mosques after school, officials said.

Some 150 people in Cianjur were still missing after the quake, according to the National Disaster Management Agency.

"Our focus is to find those still missing for the next three days," said agency head Suharyanto.

More than 1,000 people were injured and 58,000 displaced after the quake, which unleashed landslides that buried homes and people alike, according to the agency.

More than 2,300 buildings and homes were damaged, with many reduced to rubble.

The quake struck at 1:21 pm (0621 GMT) with the epicentre 10 kilometres south-west of Cianjur, the National Meteorological, Geophysical and Climatological Agency said.

The quake caused high-rise buildings in Jakarta to sway, prompting residents and office workers to rush out in panic.

Indonesia sits on the Pacific Ring of Fire, an area noted for frequent earthquakes and volcanic eruptions.