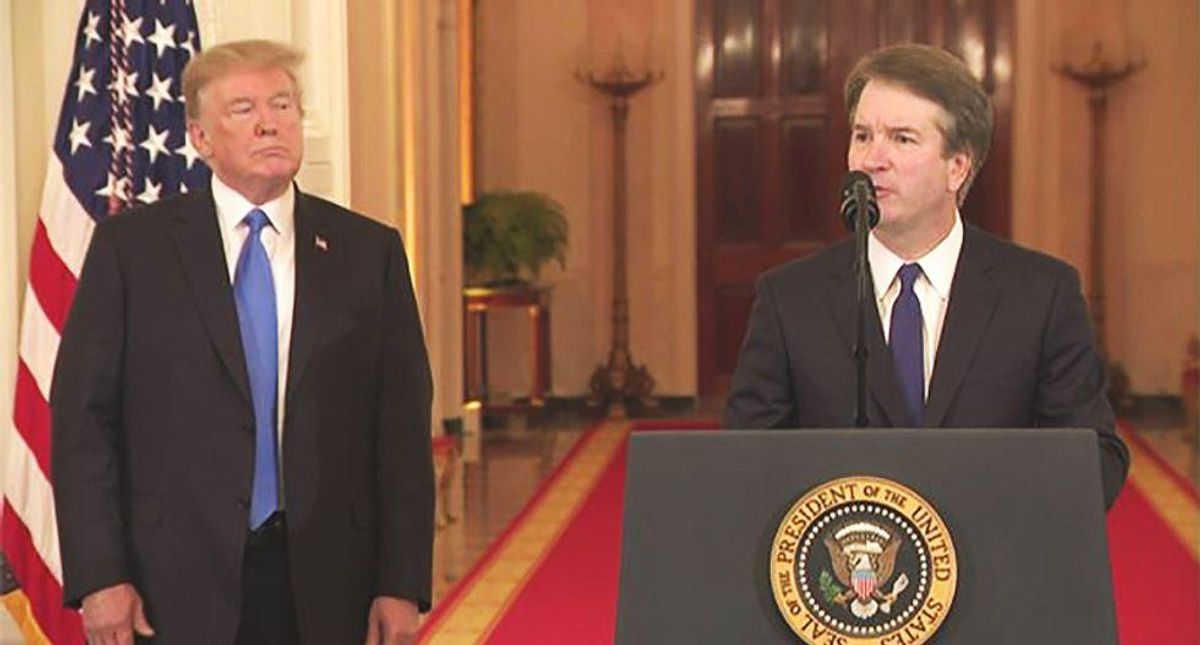 It has been almost three years since the tumultuous confirmation of Supreme Court Justice Brett Kavanaugh, and a new piece in The Atlantic is exposing some behind-the-scenes information that went unreported at the time.

One story from those who attend church with Kavanaugh recalled Easter Sunday about six months after he was sworn in. After the mass, Father Foley stood outside the church to thank people for coming. Kavanaugh weaseled his way at the priest's elbow to thank them too, "as though Brett were the priest and they were his flock."

"This odd little spectacle lent itself to multiple interpretations," recalled The Atlantic. "Was he reaching out in fellowship to his enemies? Making a show of contrition (or forgiveness)? Or was he perhaps signaling something more ominous?"

"I read it as a flex," a parishioner said of the display, noting that they moved their family away from the scene. "I read it as I'm right here, in the middle of everything, and I'm not going away. I won."

The report also walked through how Kavanaugh has managed to mix with other justices, known for being studious and detail-oriented. Justice Neil Gorsuch has known Kavanaugh most of his life, running in the same circles and going to school together. But they are miles apart.

"Kavanaugh was the proto–frat bro who organized boozy beach trips for his friends, Gorsuch the know-it-all prig who spent his free time on the debate team," said the report. "And though they ended up clerking at the same time for Justice Kennedy, they never seemed to warm up to each other. The tense nature of their relationship became a subject of speculation among the Court's insiders." The Atlantic spoke to some who called it an example of "clashing personalities."

"Gorsuch has somewhat sharp elbows and a lot of self-regard," a person told The Atlantic. Gorsuch was nominated in 2017 after Senate Majority Leader Mitch McConnell held open a Supreme Court seat for nearly a year to steal it from former President Barack Obama. Around that time, Kavanaugh was telling people he was thinking of leaving the DC Circuit Court to go make more money in private practice.

The piece talked about how Kavanaugh had a knack for making friends with everyone, and being willing to have dinner with Democrats despite their disagreements. But the thought of a nonpartisan dinner companion took a turn for one Kavanaugh date in the 1990s while working on the Ken Starr investigations.

"Around this time, Kavanaugh went out on a date with Colleen Covell, a young Democratic prosecutor in D.C.," the report continued. "When they got to the bar, Covell recalls, Kavanaugh started draining beers at an impressive pace. The more he drank, the more candid he became in his commentary on the Clintons, until eventually, he was shouting things like 'I can't believe you voted for him!' and 'They're total crooks!' The intensity of his animus was startling, Covell told me. 'I just remember thinking, Whoa, he really hates them.'"

But then came President Donald Trump. During the hearings, Kavanaugh sang Trump's praises. At his acceptance speech, Kavanaugh described Trump's dedication to the vital role of the judiciary. Trump had no real involvement in judges, it was a project brought by McConnell and the White House Counsel's office. Trump's only participation was bragging that he got to confirm so many judges while Obama was blocked from doing so.

"No president has ever consulted more widely or talked with more people from more backgrounds to seek input about a Supreme Court nomination," Kavanaugh said at the White House. It was a claim that the Washington Post called "bizarre" at the time.

But in secret, he had another opinion of the president.

"Kavanaugh had expressed his own misgivings about the president who nominated him, even as he went through the requisite motions of flattery and fealty," said the report.

"He was no fan of Donald Trump," one Kavanaugh friend told the reporter. "But he's not going to say no to the nomination. He had to kiss the ring to get there."

Trump, has now become a blogger from his Mar-a-Lago club in Palm Beach, Florida. He has railed on Rep. Liz Cheney (R-WY) for the belief that he didn't win the election in 2020. But flying under the radar is Kavanaugh, who Trump continued to defend against misconduct allegations well into his first years on the Court.

Critics of Kavanaugh say that there are still unknown questions about him that puts the court at risk. A large chunk of Kavanaugh's debt mysteriously disappeared ahead of his nomination, as Mother Jones reported.

When Attorney General Merrick Garland was confirmed this year, Sen. Sheldon Whitehouse (D-RI), who sits on the Senate Judiciary Committee, sent a letter to the Justice Department asking that they conduct "proper oversight" into the 2018 FBI investigation into Kavanaugh's sexual assault allegations.

In his letter, Whitehouse said that the previous investigations "appears to have been a politically-constrained and perhaps fake."

Read the extensive report on Kavanaugh at The Atlantic.