Butterfly decoys trick predators into attacking them in conservation study

Most people don’t realize how hard it is to be a butterfly. They live in a dangerous world, facing environmental challenges like habitat loss and climate change. They also have to contend with predators, including birds, wasps and dragonflies.

But butterflies are much tougher than they look. Some, like monarchs, store toxins in their bodies from milkweed, and even advertise this fact with their bright coloration. Other species have wings that are flashy on top but dull underneath, allowing them to switch between brilliance and near-invisibility as needed.

Despite these tricks, adult butterflies still fall prey to a wide variety of predators. While butterflies work hard at avoiding becoming someone else’s lunch, how much do predators affect butterfly communities?

This question is important for a few reasons. Butterflies help pollinate many flowering plants, ranging from crops to backyard veggies. Butterflies are some of nature’s best ambassadors, offering us all the chance to appreciate biological diversity.

Yet many are at risk of extinction, as combinations of threats begin to overwhelm the best defenses evolution has produced. Conserving and restoring butterfly communities is important for agriculture, ecosystems and for our own sense of wonder in a rapidly changing world.

So how exactly could predators affect butterfly communities? It’s surprisingly hard to predict: sometimes predators increase diversity in communities by targeting the most common species, which makes life a little easier on rarer competitors. Conversely, if predators prefer the rarer species, selectively attacking them would reduce community diversity by pushing these more sensitive species over the edge of local extinction.

To figure out how predators impact butterfly communities we set up a study in Burnt Lands Provincial Park, near Ottawa, Canada. Burnt Lands hosts a globally rare alvar ecosystem, where only a shallow layer of soil covers the bedrock, creating patches of grassland interspersed with woodland and bare limestone pavements. Alvars are home to a wealth of flowering plants, which helps make them ideal habitat for butterflies. Burnt Lands hosts a diverse community of at least 50 species.

To determine the diversity of butterfly communities at Burnt Lands we followed a well-used technique called the Pollard walk, which standardizes butterfly surveys. Collecting data on butterfly predators, however, presented problems. Many animals eat butterflies, making counting all the predators in a given area almost impossible. How to study predators, then? 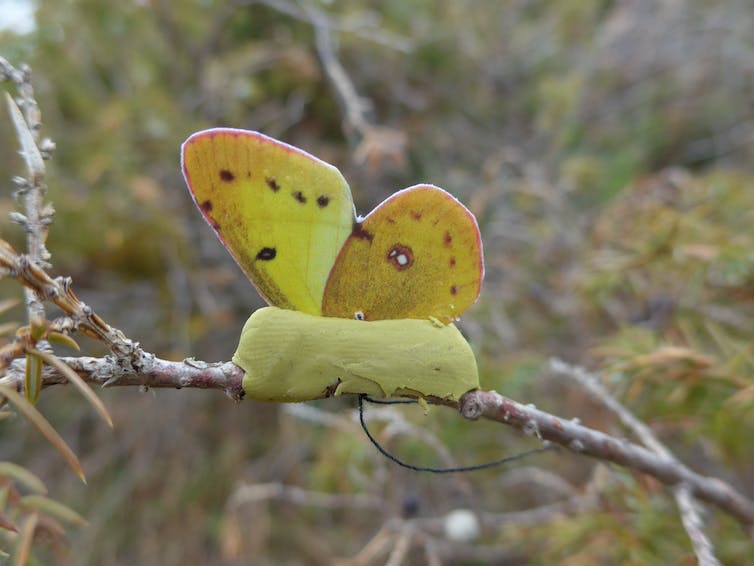 A butterfly decoy modelled after the clouded sulphur, Colias philodice, that was not attacked by predators.(Susan Gordon), Author provided

Butterfly decoys have a track record of successfully tricking predators into attacking them. They are built of modeling clay, which is soft enough to be marked easily. So when predators take a bite of a decoy, they leave an imprint.

We placed the decoys in trees and bushes in areas where we were surveying butterflies and returned after 48 hours to check for marks. By counting attack rates on decoys, we measured the predator pressure on butterflies throughout the study area. 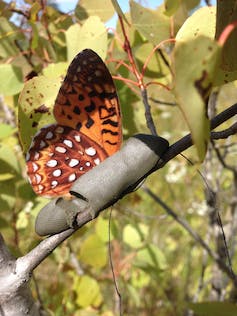 A butterfly decoy modeled after the aphrodite fritillary, Speyeria aphrodite, that was attacked by predators.(Susan Gordon), Author provided

Predators vigorously attacked butterfly decoys, but the number of models attacked — an index of how many butterfly predators are present — was unrelated to butterfly diversity.

This matters for butterfly conservation, including in urban habitats. Birds can be abundant in such areas, while butterfly diversity is often much lower, but this interaction shouldn’t be the focus of conservation efforts.

We found that butterfly diversity tracks flowering plant diversity across our study landscape, indicating that our priority should be planting a diversity of flowers that butterflies can use as nectar sources and caterpillar host plants. By doing this, even with abundant predators, urban areas can become colourful oases of biological diversity.