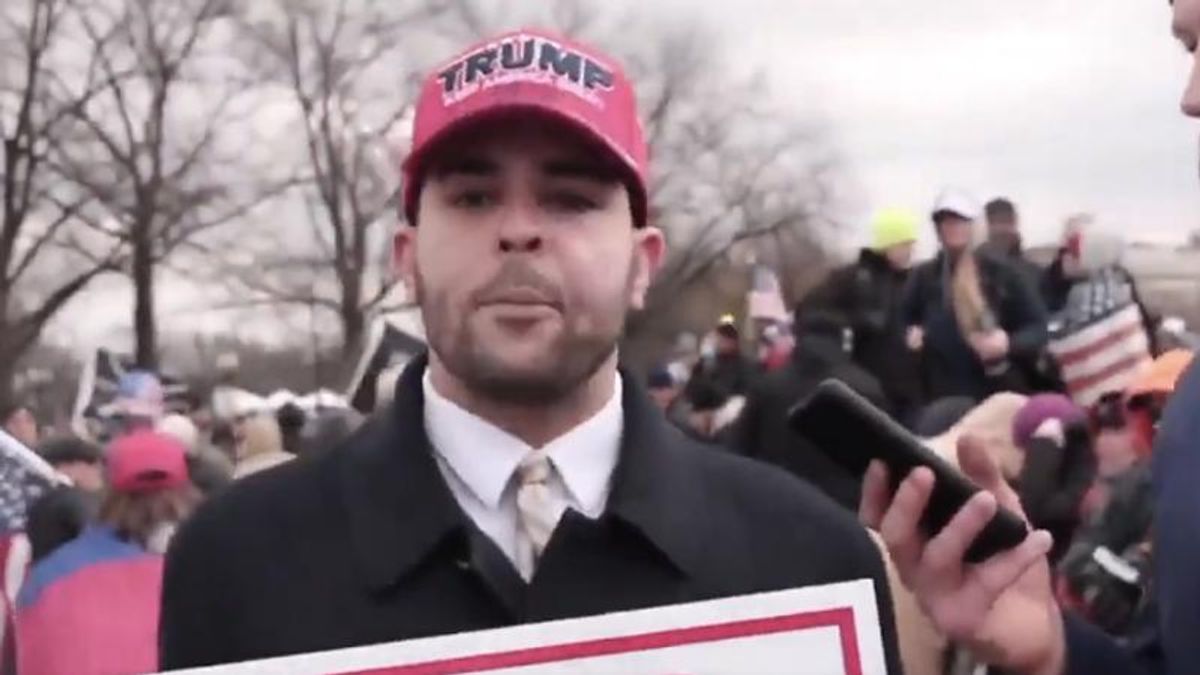 A 26-year-old Brooklyn man distinctive for wearing a coat and tie to the January 6 Capitol riot has been arrested on charges alleging he sprayed police officers with chemical irritants.

Edward Francisco Rodriguez was busted with the help of videos that had been posted on a Redditt.com subpage "r/CapitolConsequences." In the videos, Rodriguez was nicknamed "#SuitMacer" by social media users. The video was titled, "#SuitMacer unmasked. He sprayed some kind of pepper spray on many police officers."

Notably, the FBI criminal report mentioned Rodriguez more often as "#SuitMacer than by his real name. Here's part of what it garnered from the two videos -- spliced together -- on Redditt.

"#SUITMACER, is wearing a dark colored suit, white shirt, light colored patterned tie, red colored "TRUMP" hat, and a red colored face mask. The individual is also carrying a white colored sign with the words "STOP THE STEAL" in red lettering. The individual referred to as #SUITMACER can be seen among a crowd of protesters in a location recognized as the lower-level terrace of the west side of the US Capitol.

#SUITMACER proceeds to point a black colored canister at visibly marked law enforcement officers manning a barricade on the terrace and sprays the officers with a chemical irritant before retreating back into the crowd."

The FBI report alluded to an interview Rodriguez is seen giving to an "independent media reporter" during the riot:

"#Suitmacer states, 'Here in America, we fight back. We will never surrender to dictatorship, corruption, communism or socialism. We the people will never put up with their bullshit.'"

The FBI also referenced a separate interview on Twitter in which Rodriguez is seen boasting, "We made it all the way through."

Rodriguez is charged with engaging in physical violence at the Capitol, assaulting resisting or impeding certain officers and other counts of illegal entry and disorderly conduct. You can read the FBI complaint here.

You can see video below: