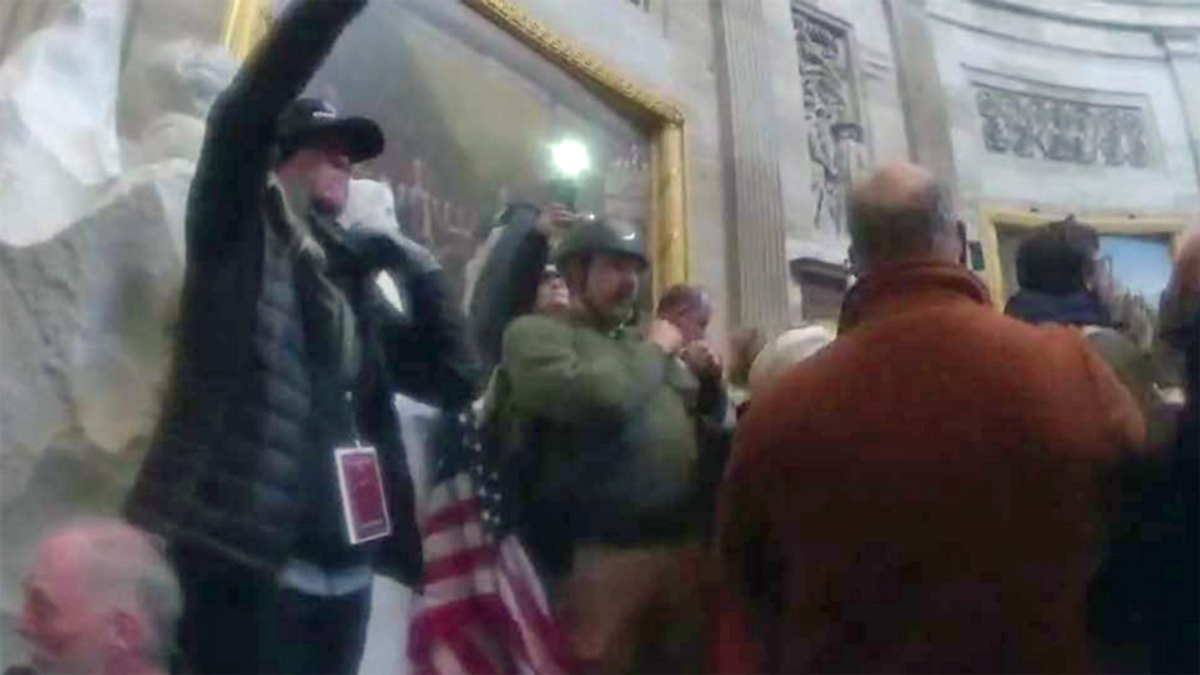 Matthew Eugene Loganbill is the latest suspect whose arrest has been announced been by the FBI in the January 6 Capitol riot. But despite being preceded by hundreds of suspects, Loganbill stands out for offering some memorable quotes in the aftermath.

Loganbill, 55, of Versailles, MO., is a firearms dealer and owner of a store call the Tooth and Nail Armory in Gravois Mill, MO, according to the FBI arrest report. Like so many others, he was charged with obstruction of a Congressional proceeding, unlawful entry and violent entry of disorderly conduct.

But Loganbill offered some creative spin on it all. As to the gas mask and helmet, for example, the FBI arrest report states "he claimed he had brought these items to the protest because he was fearful that Antifa would infiltrate the rally/protest."

He told the FBI that he saw nearby protesters clashing with police outside the Capitol and then it went something like this:

"Loganbill indicated that the police then fired tear gas canisters into the crowd, but that the protesters continued to surge toward the police apparently undeterred by the gas and the obvious efforts by law enforcement to hold the crowd. Loganbill stated that he then ducked behind a storage container and donned (the) gas mask and helmet that he had brought with him.

"He then stated that after he emerged from behind the storage container, the police skirmish line and barricades were gone, and he followed protesters and entered the U.S. Capitol through the doors that were near the scaffolding he thought was erected for the inauguration.

"Although Loganbill acknowledged the firing of tear gas at the crowd by police before he entered the Capitol, LOGANBILL stated he did not see any sign, nor did anyone tell him that he was entering a restricted area. LOGANBILL admitted that the doors to the Capitol were lined by police officers, but he claimed that none of the officers instructed him or others to depart."

"Loganbill said he did not see any police officers arrest anyone on the premises, and that he did not observe any violence between protesters and police, though he admitted the crowd literally pushed forward to enter the Capitol. Loganbill added again that he did not personally damage any property, or participate in any acts of violence, and he did not believe he had committed any crimes."

So there you have it: Those officers spraying tear gas at Loganbill and his fellow insurrectionists as they surged through them must not have meant for the tear gas to be seen as a sign of unpleasantness. Crime? What crime? I didn't a sign. No one said anything.

That's pretty consistent with the quality of Loganbill's Facebook prose. Before the riot, the FBI said, Loganbill demonstrated his motivation:

""President Trump has been right on just about everything he said. . . . So when he says the election was rigged I'll bet my life on him being right . . . 74 million strong sir, we got your back" (ellipses in original).

"On January 2, 2021, Loganbill posted another comment, "Thinking about heading to DC for the Stop the Steal rally." Loganbill also indicated a desire to use violence prior to January 6, 2021. For example, on December 19, 2020, Loganbill commented "They haven't seen a riot, til our side gets started."

"On December 16, 2020, Loganbill sent Facebook comments directed to two members of the U.S. Senate, telling them that: 'We have witnessed the destruction of the very fiber of our freedom, the election process. Well over half of the American people no longer accept that we can have a fair election. We have also watched the complacency of our judicial system in action. If you do not possess the courage to fight against the evil that is destroying our once great nation, so be it. The American people are becoming desperate for truth and morality. Politicians who don't represent that and act for the hearts of the true Americans will be held accountable. Complacency is not an option.'"

The FBI also shared this response by Loganbill to someone on Facebook criticizing his participation in the riot:

"Even by your admission the Patriots were not armed. Surprising what a few Real men (and some old ladies) can do without burning one building, without looting one store, with nearly zero damage (that was your side) to the Capitol. You soy boyscould take note."

On January 16, 2021, Loganbill further commented on the Facebook Account, "There was very little damage done, (again the BLM/antifa agitators) the cops stepped aside and let everyone in, there was no looting, and the vast majority left peacefully when asked, just as they did coming in," and "Didn't see any violence whatsoever, there were some suspiciously dressed individuals, and some who were grabbed and pushed out by patriots, actually one of my buddies sent 2 soy boys away."

The FBI did feel compelled to add this note: "Your affiant understands the term "soy boy" to be a derogatory term used by certain people to denigrate individuals they perceive as lacking masculine characteristics (because they drink soy and not cow's milk)."