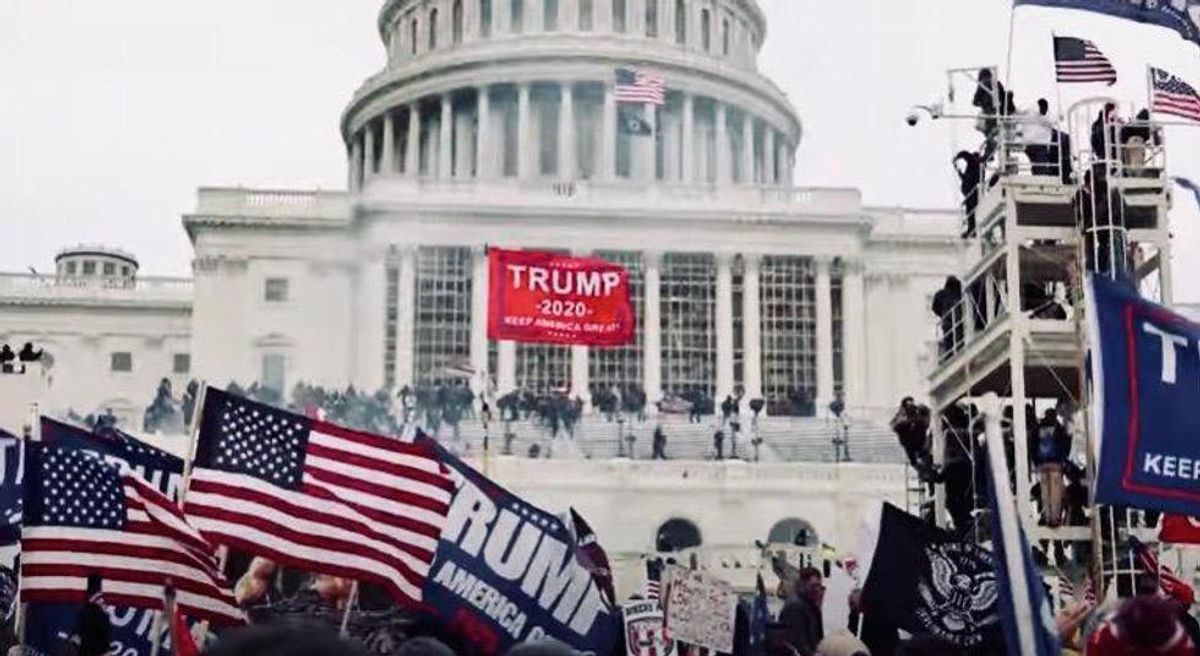 On Tuesday, the Huffington Post reported that Logan Barnhart, a pro-Trump Michigan bodybuilder, has been arrested after online "sedition hunters" used Instagram shots to identify him as a Capitol rioter wanted for dragging a D.C. Metropolitan Police officer down a set of stairs.

"Seven months after the man online sleuths dubbed #CatSweat was photographed dragging a police officer down a set of stairs during the attack on the U.S. Capitol, the Michigan man has been arrested by the FBI," said the report. "Barnhart, whom the FBI referred to as Capitol suspect 128-AFO because he was wanted for assaulting federal officers, was a major target for the 'Sedition Hunters' community, which had given him the nickname 'CatSweat' because he was wearing a sweatshirt branded with the name of Caterpillar, the construction equipment manufacturer. (Barnhart worked as a machine operator for Barnhart & Son Inc., which is owned by his father.)"

According to the report, "CatSweat" has been a "white whale" of the Sedition Hunters for months — one of the original rioters captured in an image that inspired the community to try to identify the perpetrators.

Ultimately, his identity was uncovered because the Sedition Hunters found a clear image of his face in the crowd at the "Save America" rally that immediately preceded the attack. Plugging his name into a reverse image search uncovered him on several bodybuilder sites, and led to his Instagram account, which featured images of him wearing the same outfit he wore at the riot.

"Several defendants have been arrested in connection with that attack, including Jack Wade Whitton, who was positioned next to Barnhart and had his hand on the back of the officer's neck. (Whitton has been indicted alongside Jeffrey Sabol, Peter Stager, Michael Lopatic, Clayton Mullins.)" said the report. "Federal prosecutors said suspects including Whitton and Sabol dragged the officer ― identified by the initials 'B.M.' ― down the stairs and into the crowd, where Peter Stager used an American flag on a pole to beat him."