Capitol rioter ‘on the tip of the spear’ has ties to Trump-loving GOP lawmaker Doug Mastriano: report 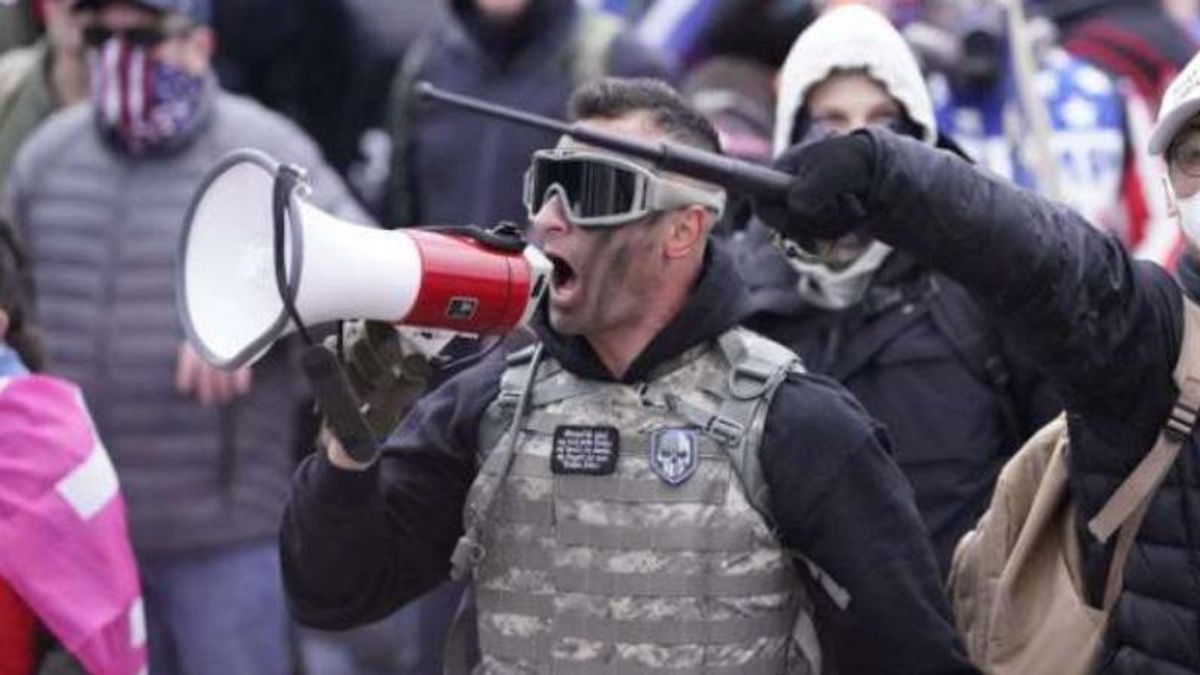 Samuel Lazar has been arrested by the FBI for allegedly firing chemicals at Capitol police officers as part of a "war" he claimed to be waging on January 6.

But Lazar -- nicknamed "Face Paint Blowhard" by the online sedition hunter community -- might be getting as much attention for his public pro-Trump political activities since the riot, the Philadelphia Inquirer reports today. Lazar had been distinctive for his camouflage face paint and tactical vest and goggles, it reported.

At the Capitol riot, Lazar was among the violent insurrectionists who physically attacked officers, the FBI criminal complaint states.

"Lazar walked along the police line, grabbed the bike rack and pulled it with his left hand in an attempt to remove it, while discharging the chemical irritant from a canister in his right hand,

"Lazar was told to 'get back' and police deployed a chemical irritant causing Lazar to retreat down the steps. Lazar then redeployed his chemical irritant toward (two officers) a second time, causing (one of them) to lose the ability to see."

"In this video, Lazar stated, "They maced us, those tyrannical pieces of shit, and we maced them right the fuck back and now they're taking the building."

Lazar then referenced that the rioters had successfully breached the Capitol building.

"In the video, Lazar continued, 'They attacked the people. We have a right to defend ourselves. Fuck the tyrants. There's a time for peace and there's a time for war.' Lazar answered a question from someone nearby by stating, "I was right at the front, on the tip of the spear, brother. That's where you gotta be."

Earlier in the day, Lazar had declared the following in a since-deleted video on his Facebook page:

"Donald Trump is going to shock the world!" he said. 'We're ready for war, if needed.' He posted again after the day's chaos, saying there is "a time for peace and there's a time for war.

"Our constitution allows us to abolish our [government] and install a new one in [its] place," he wrote, according to the Inquirer.

Still, it might be Lazar's presence at pro-Trump political events that garners the most attention back home going forward.

"Despite his activities at the Capitol that day, Lazar surfaced again months later in photos from a fund-raiser with Mastriano, who is widely seen as a leading GOP contender for Pennsylvania governor in 2022," the Inquirer reported.

"In photos from the event, Lazar is seen posing alongside Mastriano and other GOP election skeptics including Senate hopeful Kathy Barnette of Montgomery County, state Rep. Stephanie Borowicz, of Wayne Township and Teddy Daniels, who is running to represent portions of Northeast Pennsylvania in Congress.

"Mastriano, responding to the photos, has since denied knowing Lazar and publicly condemned his actions at the Capitol in a statement. 'Why would you assume that every politician who takes a picture with someone at an event automatically knows who they are or agrees with what they believe?' he wrote.

"But the same group of online sleuths that first identified Lazar and uncovered his photos with Mastriano later discovered that the two had been photographed together at two earlier events — an event in late November and a December trip to Washington in which they posed outside the U.S. Supreme Court building while attending a "Stop the Steal" rally."

"Mastriano's campaign spent thousands of dollars chartering buses to Washington for Trump supporters on Jan. 6. And despite the Franklin County Republican's public condemnation of the riot and claim that he left as soon as violence broke out, videos have since surfaced that appear to depict him passing through breached barricades near people brawling with police."

Lazar, 37, of Ephrata, PA was charged with assaulting and obstructing law enforcement officers, along with violent unlawful entry at the Capitol.