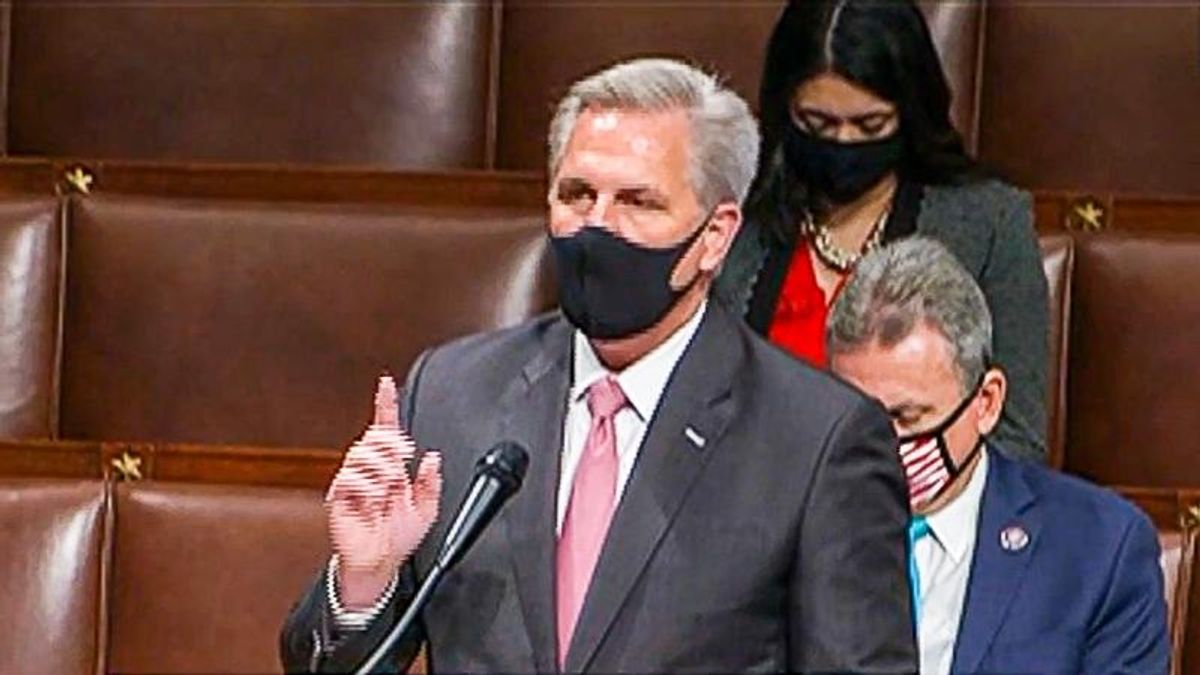 Republican Minority Leader Kevin McCarthy (R-CA) is set on forcing a vote in the House on his resolution to censure Rep. Maxine Waters (D-CA). There's little chance it will pass, and Democrats might be able to block it before he's able to force a vote, but regardless it very easily could backfire against them, according to Politico.

Republicans in the House and Senate are claiming to be furious after Waters went to Minnesota to talk with Black Lives Matter protestors and told them if former police officer Derek Chauvin is not found guilty of killing George Floyd they must "stay on the street" and become "more confrontational."

Rep. Marjorie Taylor Greene is falsely claiming Waters is inciting violence, and she's moving to expel the California Democrat, which also will not happen.

Others, like House Republican Minority Whip Steve Scalise, on Tuesday falsely claimed Waters was "trying to incite violence and, in fact, there is violence going on right now in Minnesota because of her actions."

Republicans are trying to inflate Waters' comments and use them against Democrats. The National Republican Congressional Committee "is already planning to use this vote to tie moderate Democrats to Waters, according to spokesman Michael Mcadams," Politico reports.

Politico says if Republicans go ahead with this plan it "could also trigger Democratic action as well."

Many House Democrats are still furious about the January 6 insurrection, and that they're forced to work "alongside apologists to an insurrection."

"Tensions remain high in the House after Jan. 6, with Democrats privately lamenting that they're working alongside apologists to an insurrection. Democratic leadership has privately worked to persuade many of these frustrated members to hold back on forcing votes rebuking their GOP colleagues to try to lower the temperature in Washington. They may be less restrained after the GOP-led vote on Waters."

Democrats could force action against some of the extremists, or resuscitate what had appeared to be an all-but-dead January 6 House Commission, something Speaker Pelosi just brought up again, as did a New York Times editorial board member.