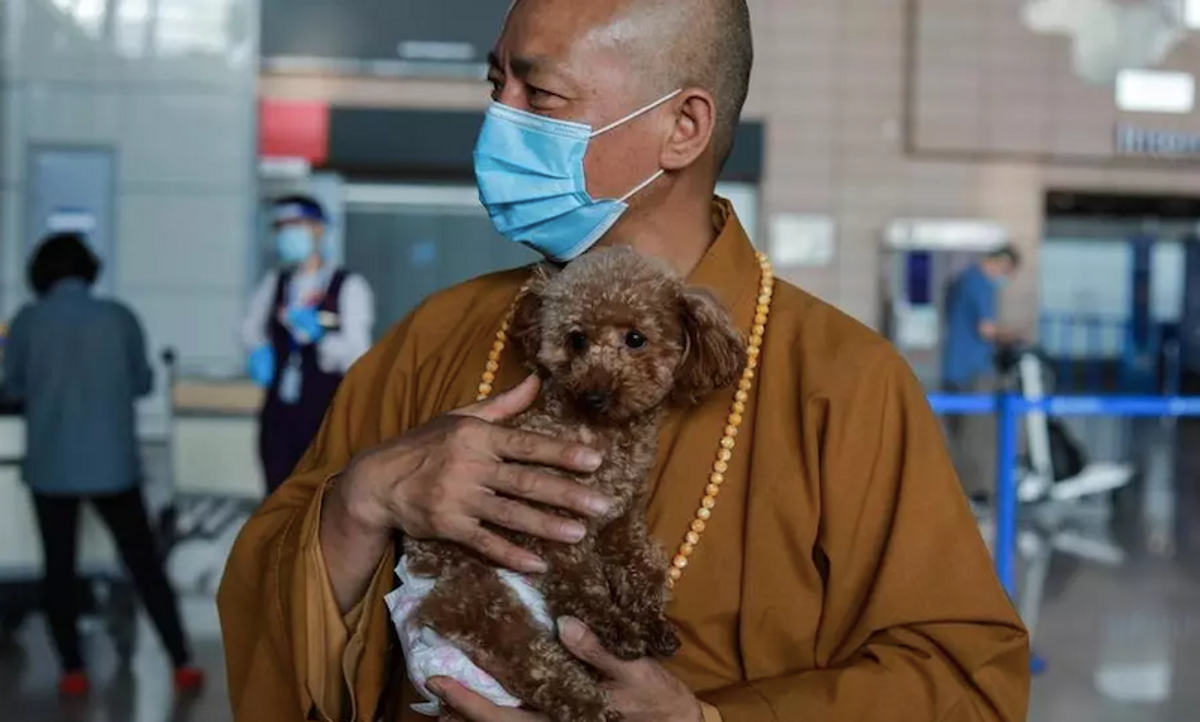 Zhi is no ordinary animal rescuer: he is a Buddhist monk who gives stray dogs a new life either at his ancient monastery or at a shelter he runs in Shanghai Jessica YANG AFP

His bald head glistening with sweat, Zhi Xiang peers into the eyes of a stray dog whose coat has become matted in heavy rain and says soothingly: "Let me cut your hair, cutie."

The bedraggled pooch is among scores of dogs hauled off the streets of Shanghai by police and packed in metal cages in a foul-smelling holding area.

More than 20 puppies are also crammed into a yellow plastic crate; one dog is dragged in while inside a tied bag.

But for Zhi's intervention, they will all be put down in a matter of days.

But Zhi is no ordinary animal rescuer: he is a Buddhist monk and will give these dogs a new life either at his ancient monastery or at a shelter he runs in the Chinese city.

He already has nearly 8,000 dogs to feed and care for. A few hundred will eventually be resettled in Europe or North America.

"I have to rescue them because if I don't, they will die for sure," said the 51-year-old, who temporarily discards his monk's robes for an orange workman's suit as he gives vaccinations to dishevelled dogs fresh off the streets.

Driven by his faith, Zhi has been rescuing animals -- mostly dogs but also cats and other strays -- since 1994.

It started when he began treating cats hit by vehicles on the road. Back then, there were few stray animals, but that has changed markedly in the last four or five years, he said.

China's growing wealth has seen a boom in the pet market but some people simply abandon them when they do not want to care for them anymore, said Zhi.

"This is not caused by people who dislike dogs, or by the government, but by so-called dog lovers who don't have proper animal-caring knowledge," said Zhi.

Breeding among strays is causing their numbers to explode.

State media said in 2019 that there were 50 million stray animals in China and that number is roughly doubling each year.

With help from volunteers and his small workforce, Zhi keeps several hundred dogs at his Bao'en Temple, where he is the head monk and golden Buddhas look on serenely against a backdrop of howling pooches.

The temple, which is still a place of worship, also hosts a room filled with 200 cats, along with a ragtag collection of chickens, geese and peacocks.

The air is an incongruous mix of animal smells and burning incense.

Zhi keeps mostly sick dogs there and the rest go to a bigger facility elsewhere. The lucky ones will find a new home with new owners.

The unlucky ones, about 30 percent of the dogs he rescues, die of disease or were already too sick to save.

Zhi is not a trained vet but his love of animals, in the way he strokes, soothes and kisses them, is obvious.

The continually growing number of unwanted animals is a huge financial strain.

Zhi, who gets up at 4:00 am each day, gets no money from the government. He has borrowed from his parents and other monks and receives handouts from donors.

He estimates that annual costs are about 12 million yuan ($2 million) and he needs 60 tonnes of dog food every month.

"The problem is that I can't borrow any more money now," he said.

Since 2019, Zhi has been sending some of the strays abroad to be resettled overseas.

Volunteers who can speak English use social media to reach an international audience, and about 300 dogs have been placed in the United States, Canada and various European countries including Germany.

The memory of those lucky dogs -- their journey from the streets and almost certain death to a new life -- brings tears to his eyes.

"I think they're very happy so I feel it's worthwhile," he said. "But of course I miss them."

One recent Saturday morning, Zhi was at Shanghai's international airport to drop off a dog to a passenger who volunteered to take it to a new home in the US city of Seattle.

He wipes away tears as the woman and dog disappear through the departure gate.

"I have a dream that one day, when I have some free time, I want to go abroad and visit them, take photos with every dog that I rescued," he said.

"So when I get old and can't walk, I have these photos to look at."