Cyborgs v ‘holdout humans’: what the world might be like if our species survives for a million years

Most species are transitory. They go extinct, branch into new species or change over time due to random mutations and environmental shifts. A typical mammalian species can be expected to exist for a million years. Modern humans, Homo sapiens, have been around for roughly 300,000 years. So what will happen if we make it to a million years?

Science fiction author H.G. Wells was the first to realize that humans could evolve into something very alien. In his 1883 essay, Man in the year million, he envisioned what’s now become a cliche: big-brained, tiny-bodied creatures. Later, he speculated that humans could also split into two or more new species.

While Wells’s evolutionary models have not stood the test of time, the three basic options he considered still hold true. We could go extinct, turn into several species or change.

An added ingredient is that we have biotechnology that could greatly increase the probability of each of them. Foreseeable future technologies such as human enhancement (making ourselves smarter, stronger or in other ways better using drugs, microchips, genetics or other technology), brain emulation (uploading our brains to computers) or artificial intelligence (AI) may produce technological forms of new species not seen in biology.

It is impossible to predict the future perfectly. It depends on fundamentally random factors: ideas and actions as well as currently unknown technological and biological limits. But it is my job to explore the possibilities, and I think the most likely case is vast “speciation” – when a species splits into several others.

There are many among us who want to improve the human condition – slowing and abolishing aging, enhancing intelligence and mood, and changing bodies – potentially leading to new species.

These visions, however, leave many cold. It is plausible that even if these technologies become as cheap and ubiquitous as mobile phones, some people will refuse them on principle and build their self-image of being “normal” humans. In the long run, we should expect the most enhanced people, generation by generation (or upgrade after upgrade), to become one or more fundamentally different “posthuman” species – and a species of holdouts declaring themselves the “real humans”.

Through brain emulation, a speculative technology where one scans a brain at a cellular level and then reconstructs an equivalent neural network in a computer to create a “software intelligence”, we could go even further. This is no mere speciation, it is leaving the animal kingdom for the mineral, or rather, software kingdom.

There are many reasons some might want to do this, such as boosting chances of immortality (by creating copies and backups) or easy travel by internet or radio in space.

Software intelligence has other advantages, too. It can be very resource efficient – a virtual being only needs energy from sunlight and some rock material to make microchips. It can also think and change on the timescales set by computation, probably millions of times faster than biological minds. It can evolve in new ways – it just needs a software update.

Yet humanity is perhaps unlikely to remain the sole intelligent species on the planet. Artificial intelligence is advancing rapidly right now. While there are profound uncertainties and disagreements about when or if it becomes conscious, artificial general intelligence (meaning it can understand or learn any intellectual problems like a human, rather than specializing on niche tasks) will arrive, a sizeable fraction of experts think it is possible within this century or sooner.

If it can happen, it probably will. At some point, we are likely to have a planet where humans have largely been replaced by software intelligence or AI – or some combination of the two.

Eventually, it seems plausible that most minds will become software. Research suggests that computers will soon become much more energy efficient than they are now. Software minds also won’t need to eat or drink, which are inefficient ways of obtaining energy, and they can save power by running slower parts of the day. This means we should be able to get many more artificial minds per kilogram of matter and watts of solar power than human minds in the far future. And since they can evolve fast, we should expect them to change tremendously over time from our current style of mind.

Physical beings have a distinct disadvantage compared with software beings, moving in the sluggish, quaint world of matter. Still, they are self-contained, unlike the flitting software that will evaporate if their data centre is ever disrupted. 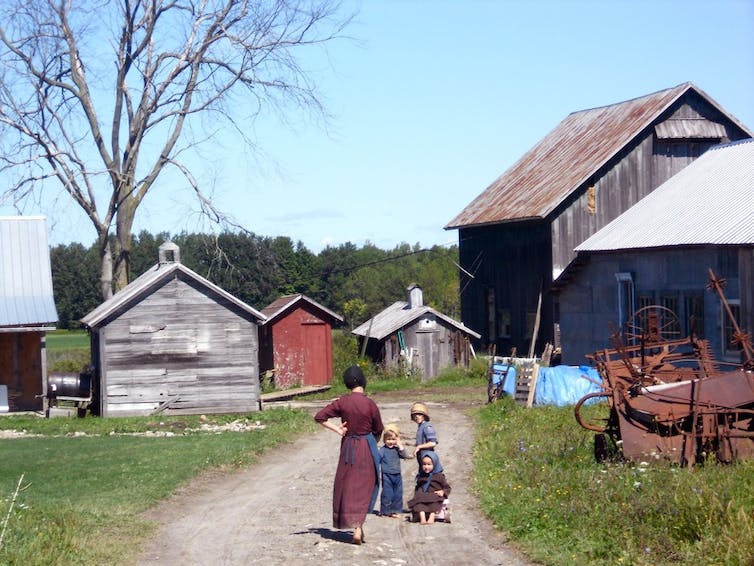 “Natural” humans may remain in traditional societies very unlike those of software people. This is not unlike the Amish people today, whose humble lifestyle is still made possible (and protected) by the surrounding United States. It is not given that surrounding societies have to squash small and primitive societies: we have established human rights and legal protections and something similar could continue for normal humans.

Is this a good future? Much depends on your values. A good life may involve having meaningful relations with other people and living in a peaceful and prosperous environment sustainably. From that perspective, weird posthumans are not needed; we just need to ensure that the quiet little village can function (perhaps protected by unseen automation).

Some may value “the human project”, an unbroken chain from our paleolithic ancestors to our future selves, but be open to progress. They would probably regard software people and AI as going too far, but be fine with humans evolving into strange new forms.

Others would argue what matters is freedom of self-expression and following your life goals. They may think we should explore the posthuman world widely and see what it has to offer.

Others may value happiness, thinking or other qualities that different entities hold and want futures that maximize these. Some may be uncertain, arguing we should hedge our bets by going down all paths to some extent.

Here’s a prediction for the year one million. Some humans look more or less like us – but they are less numerous than they are now. Much of the surface is wilderness, having turned into a rewilding zone since there is far less need for agriculture and cities.

Here and there, cultural sites with vastly different ecosystems pop up, carefully preserved by robots for historical or aesthetic reasons.

Under silicon canopies in the Sahara, trillions of artificial minds teem. The vast and hot data centers which power these minds once threatened to overheat the planet. Now, most orbit the Sun, forming a growing structure – a Dyson sphere – where each watt of energy powers thought, consciousness, complexity and other strange things we do not have words for yet.

If biological humans go extinct, the most likely reason (apart from the obvious and immediate threats right now) is a lack of respect, tolerance and binding contracts with other post-human species. Maybe a reason for us to start treating our own minorities betters.

ORLANDO, Fla. — When state investigators delved into the finances of several entities tied to Florida’s 2020 “ghost” candidate scandal, they unearthed major cash contributions from some of the state’s biggest business interests, including an affiliate of the Florida Chamber of Commerce. That entity, dubbed Secure Florida’s Future, contributed $630,000 late in the 2020 election cycle to a network of dark-money groups since subpoenaed by the Florida Department of Law Enforcement. Bank records unearthed by the probe were obtained by the Orlando Sentinel this week. The investigation emerged from r...

Spread of bird flu to mammals could put humans in danger, scientists warn

As a deadly strain of avian influenza continues to decimate bird populations around the world and spread among other animals, some scientists are warning that mammal-to-mammal transmission has emerged as a real possibility with potentially catastrophic consequences for humans.

Over the past year, officials in the United States, the United Kingdom, and Canada have detected cases of the highly pathogenic H5N1 bird flu in a variety of species, including bears, foxes, otters, raccoons, and skunks. Last month, a cat suffered serious neurological symptoms from a late 2022 infection, according to French officials who said that the virus showed genetic characteristics consistent with adaptation to mammals.

Trump biographer explains his bizarre use of 'mental projections'

As former prosecutor Mark Pomerantz's tell-all book becomes public, those who have studied and written about Donald Trump for years are coming forward to agree with some of the observations.

Speaking to MSNBC's Nicolle Wallace Friday, former Trump biographer Tim O'Brien recalled some of the more bizarre conversations he's had for the 2005 book TrumpNation: The Art of Being the Donald.