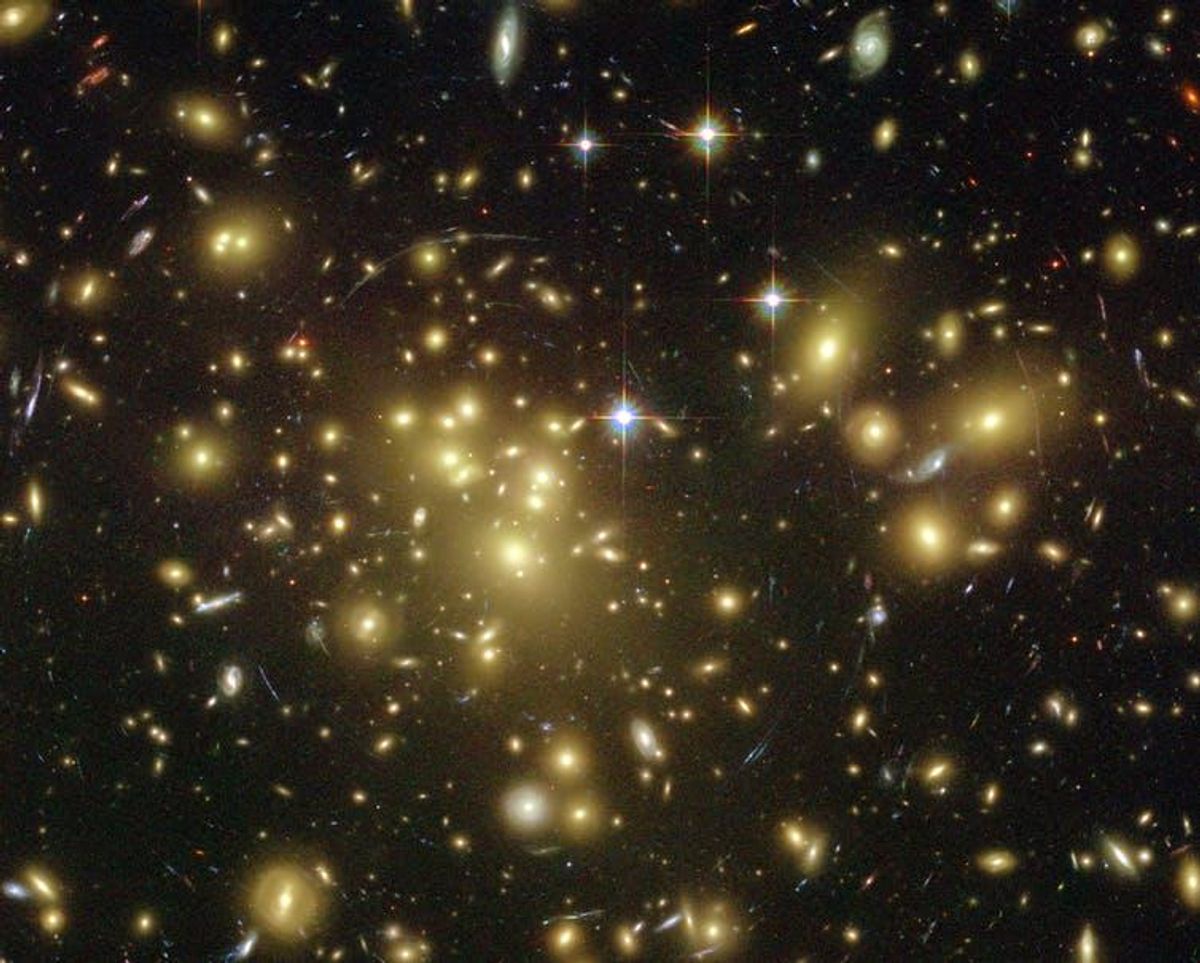 Nearly a century after dark matter was first proposed to explain the motion of galaxy clusters, physicists still have no idea what it's made of.

Researchers around the world have built dozens of detectors in hopes of discovering dark matter. As a graduate student, I helped design and operate one of these detectors, aptly named HAYSTAC. But despite decades of experimental effort, scientists have yet to identify the dark matter particle.

Now, the search for dark matter has received an unlikely assist from technology used in quantum computing research. In a new paper published in the journal Nature, my colleagues on the HAYSTAC team and I describe how we used a bit of quantum trickery to double the rate at which our detector can search for dark matter. Our result adds a much-needed speed boost to the hunt for this mysterious particle. 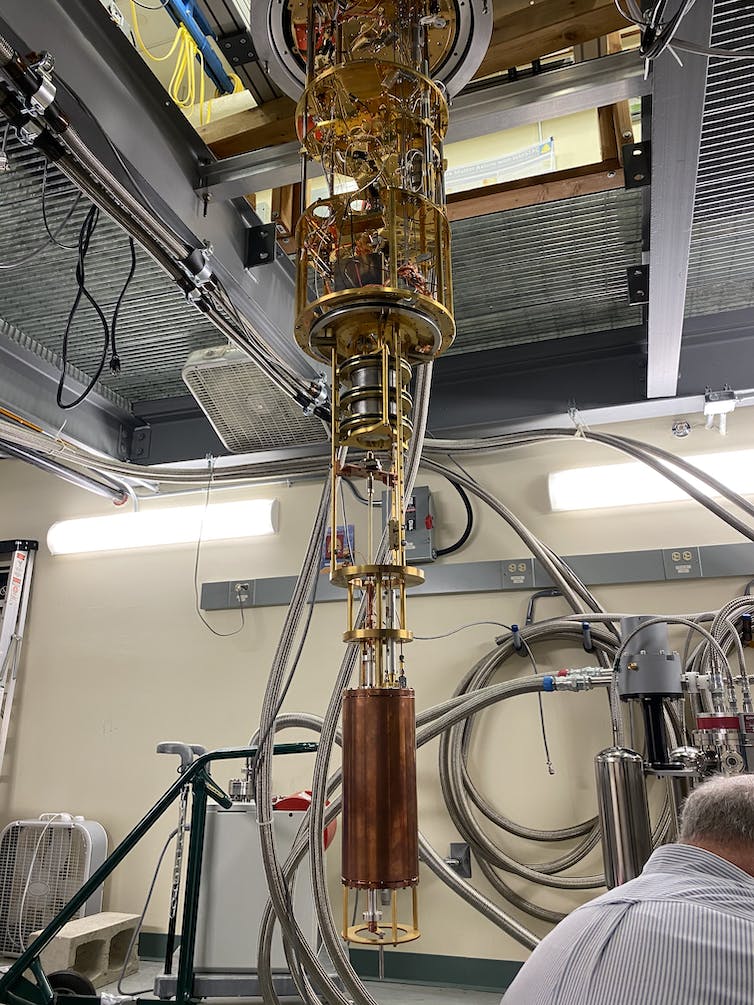 The HAYSTAC detector is searching for the axion, one of the hypothetical particles that could make up dark matter.

Scanning for a dark matter signal

There is compelling evidence from astrophysics and cosmology that an unknown substance called dark matter constitutes more than 80% of the matter in the universe. Theoretical physicists have proposed dozens of new fundamental particles that could explain dark matter. But to determine which – if any – of these theories is correct, researchers need to build different detectors to test each one.

One prominent theory proposes that dark matter is made of as-yet hypothetical particles called axions that collectively behave like an invisible wave oscillating at a very specific frequency through the cosmos. Axion detectors – including HAYSTAC – work something like radio receivers, but instead of converting radio waves to sound waves, they aim to convert axion waves into electromagnetic waves. Specifically, axion detectors measure two quantities called electromagnetic field quadratures. These quadratures are two distinct kinds of oscillation in the electromagnetic wave that would be produced if axions exist. 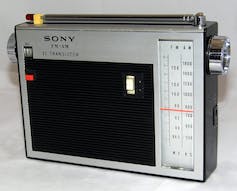 The way axion detectors search for signals is similar to the way you might search for a radio station.

The main challenge in the search for axions is that nobody knows the frequency of the hypothetical axion wave. Imagine you're in an unfamiliar city searching for a particular radio station by working your way through the FM band one frequency at a time. Axion hunters do much the same thing: They tune their detectors over a wide range of frequencies in discrete steps. Each step can cover only a very small range of possible axion frequencies. This small range is the bandwidth of the detector.

Tuning a radio typically involves pausing for a few seconds at each step to see if you've found the station you're looking for. That's harder if the signal is weak and there's a lot of static. An axion signal – in even the most sensitive detectors – would be extraordinarily faint compared with static from random electromagnetic fluctuations, which physicists call noise. The more noise there is, the longer the detector must sit at each tuning step to listen for an axion signal.

Unfortunately, researchers can't count on picking up the axion broadcast after a few dozen turns of the radio dial. An FM radio tunes from only 88 to 108 megahertz (one megahertz is one million hertz). The axion frequency, by contrast, may be anywhere between 300 hertz and 300 billion hertz. At the rate today's detectors are going, finding the axion or proving that it doesn't exist could take more than 10,000 years. 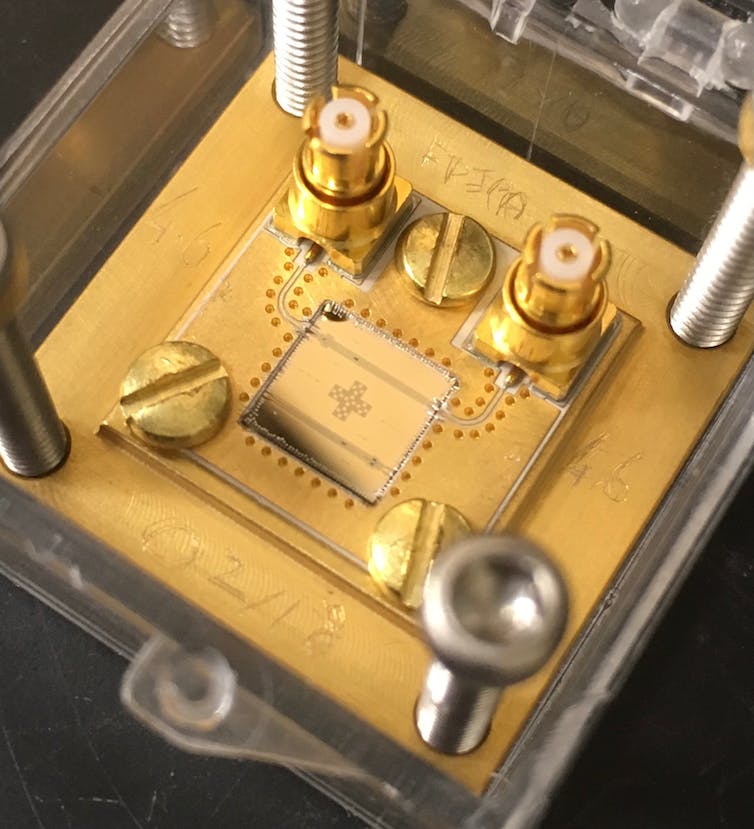 Special superconducting circuits used for quantum computing can help detectors sift through noise that might be hiding an axion signal.

On the HAYSTAC team, we don't have that kind of patience. So in 2012 we set out to speed up the axion search by doing everything possible to reduce noise. But by 2017 we found ourselves running up against a fundamental minimum noise limit because of a law of quantum physics known as the uncertainty principle.

The uncertainty principle states that it is impossible to know the exact values of certain physical quantities simultaneously – for instance, you can't know both the position and the momentum of a particle at the same time. Recall that axion detectors search for the axion by measuring two quadratures – those specific kinds of electromagnetic field oscillations. The uncertainty principle prohibits precise knowledge of both quadratures by adding a minimum amount of noise to the quadrature oscillations.

In conventional axion detectors, the quantum noise from the uncertainty principle obscures both quadratures equally. This noise can't be eliminated, but with the right tools it can be controlled. Our team worked out a way to shuffle around the quantum noise in the HAYSTAC detector, reducing its effect on one quadrature while increasing its effect on the other. This noise manipulation technique is called quantum squeezing.

In an effort led by graduate students Kelly Backes and Dan Palken, the HAYSTAC team took on the challenge of implementing squeezing in our detector, using superconducting circuit technology borrowed from quantum computing research. General-purpose quantum computers remain a long way off, but our new paper shows that this squeezing technology can immediately speed up the search for dark matter. 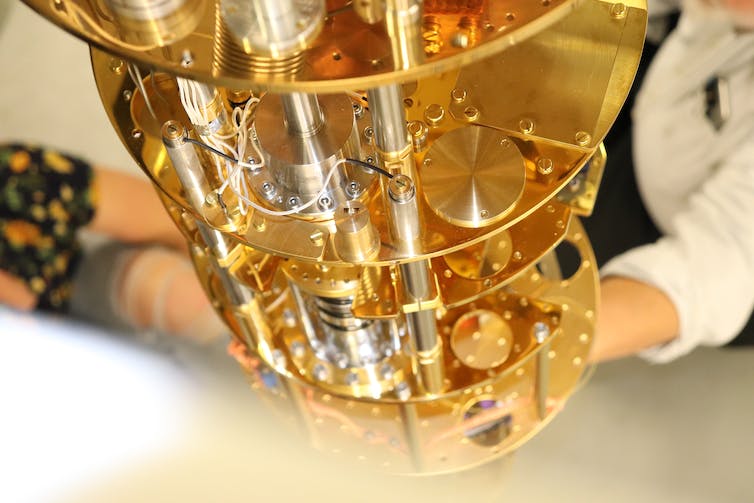 Cryogenic cooling helps reduce noise, but by squeezing quantum noise, the HAYSTAC detector can search for an axion signal even faster.

Our team succeeded in squeezing the noise in the HAYSTAC detector. But how did we use this to speed up the axion search?

Quantum squeezing doesn't reduce the noise uniformly across the axion detector bandwidth. Instead, it has the largest effect at the edges. Imagine you tune your radio to 88.3 megahertz, but the station you want is actually at 88.1. With quantum squeezing, you would be able to hear your favorite song playing one station away.

In the world of radio broadcasting this would be a recipe for disaster, because different stations would interfere with one another. But with only one dark matter signal to look for, a wider bandwidth allows physicists to search faster by covering more frequencies at once. In our latest result we used squeezing to double the bandwidth of HAYSTAC, allowing us to search for axions twice as fast as we could before.

Quantum squeezing alone isn't enough to scan through every possible axion frequency in a reasonable time. But doubling the scan rate is a big step in the right direction, and we believe further improvements to our quantum squeezing system may enable us to scan 10 times faster.

Nobody knows whether axions exist or whether they will resolve the mystery of dark matter; but thanks to this unexpected application of quantum technology, we're one step closer to answering these questions.