Women in charge: Secretary of the Interior nominee Deb Haaland says it's 'time to listen to indigenous people' 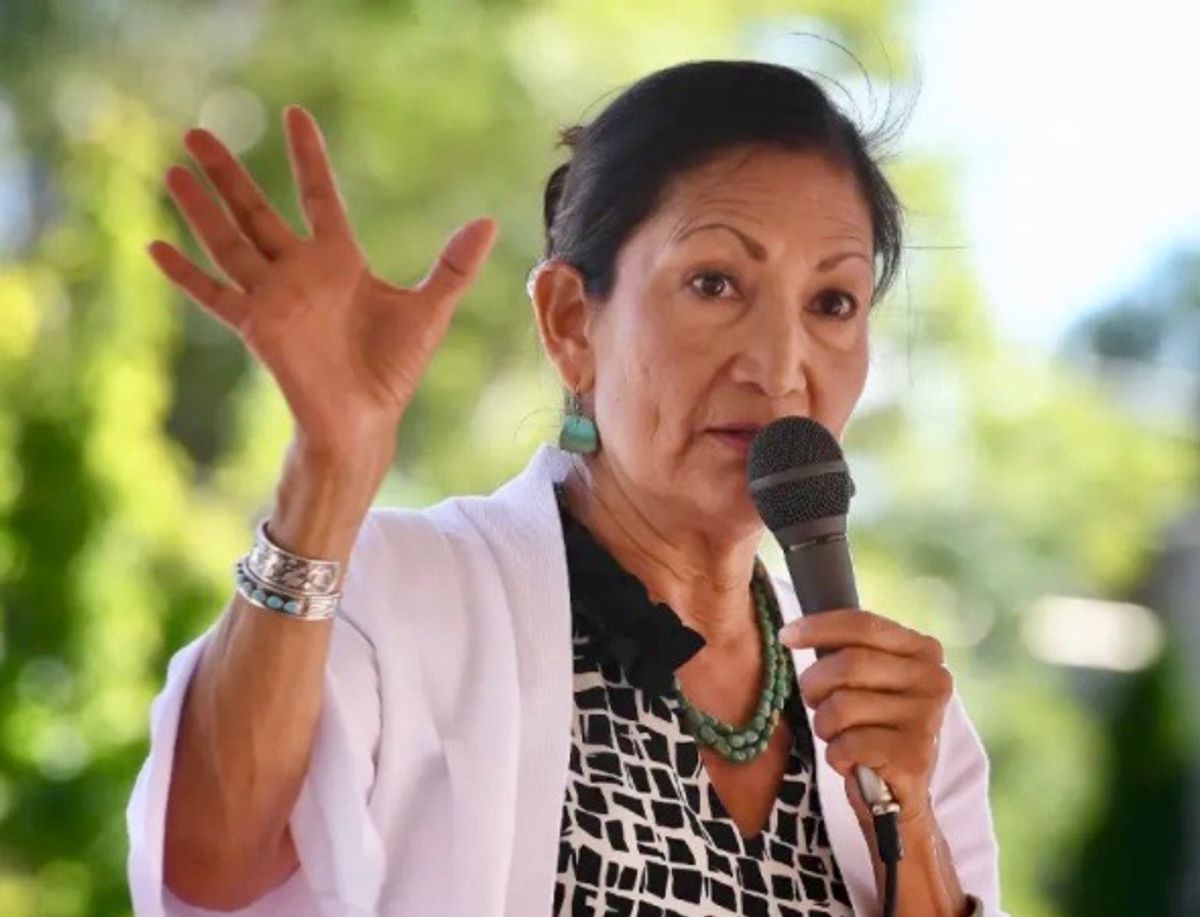 If her nomination is confirmed, Deb Haaland will become the nation's most powerful Native American leader in our 243-year history.Let that sink in for a minute.

Haaland will be the first Native American to run the Department of the Interior, the very department, USA Today noted in a recent article, "whose centuries of broken promises and benign neglect has contributed to the slow erosion of Indigenous culture."

In response, Haaland said, "I think it's a time in our world ― not just in our country, but our entire world ― to listen to Indigenous people when it comes to climate change, when it comes to our environment."

Gina McCarthy, Biden's White House climate coordinator and former EPA director under President Obama, has noted that "many people are only now seeing that environmental justice is racial justice, and vice versa, for the first time."

"Young people—and particularly young women of color—are leading the climate movement now. ...I'm not surprised it's women rising up," says McCarthy. "They demand change in a way that's inspiring. …As we continue to push progress forward, we must embrace racial justice and think about climate action in a systematic way or it's not going to work."

Assuming she is confirmed, Haaland, 60, will lead the Interior Department after representing New Mexico in the House of Representatives. Haaland's successful 2018 campaign focused on fighting climate change and creating a clean energy economy. Haaland and Sharice Davids of Kansas became the first Native American women elected to Congress that year.

Haaland's meteoric rise in Washington started at the local level in New Mexico, first as a voting rights activist for nearly a decade, then as a candidate for lieutenant governor in 2014 (she lost) and then as chairwoman of the state Democratic Party in 2015 (she won).

"I got into politics because I really wanted more Native Americans to get out and vote," Haaland said in an interview with uPolitics.

Voting rights for the Native American community have been hard won. "Congress did not grant full citizenship or the right to vote to Native Americans until 1924," reports The New York Times. But that did not mean they were able to vote immediately. Congress "allowed states to decide whether to expand such voting rights. New Mexico, where Native Americans now account for about 10.5 percent of the population, was the last state to enfranchise them, in 1962, according to the Library of Congress."

Haaland's personal story — a single mother who worked her way through law school — is a testament to her tenacity and perseverance. She was born in Winslow, AZ, in 1960, to Mary Toya, a Native American women and US Navy veteran, and J.D. Haaland, a Norwegian American veteran of the US Marine Corps and a recipient of the Silver Star for his courageous actions in Vietnam. She is an enrolled member of the Pueblo of Laguna, and also has Jemez Pueblo heritage. 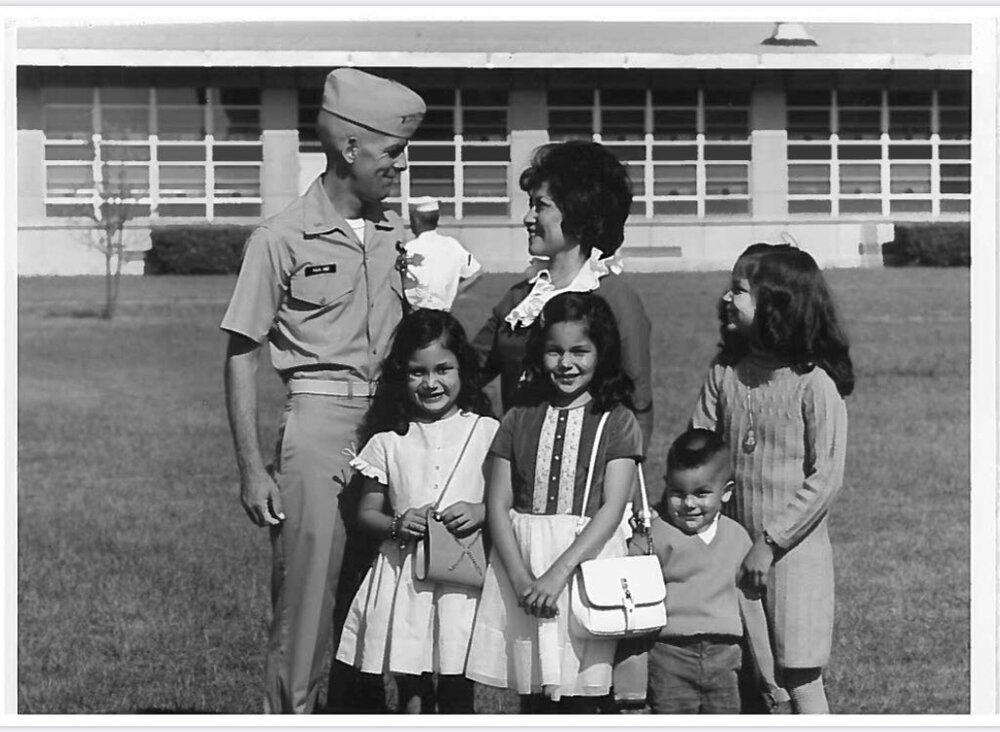 Deb Haaland and her siblings with her parents. (Twitter)

At the age of 34, four days after graduating from the University of New Mexico, Haaland gave birth to her daughter, Somáh. She decided to pursue a law degree in the mid-2000s. In her House bio, she says, "For a single mom working her way through law school, those were some lean, challenging years." In addition to having to apply for food stamps, she also often had difficulty finding housing.

"My daughter was like, 'Mom, we were actually homeless,' she recalls. "And I was like, 'Oh my God, I guess we were.' But I never looked at it that way until I realized, 'Yes, it is.'"

After earning her law degree in 2006, she became more involved in politics. "I started going into campaign offices of candidates I liked and asking for lists of native Americans who I could make phone calls [to]," she told uPolitics. "That turned into me actually showing up in those communities, knocking on doors, registering voters. I'd go to the Navajo nation fairs, Pueblo feast days, set up a booth, register voters, and drive them to the polls when it was time." 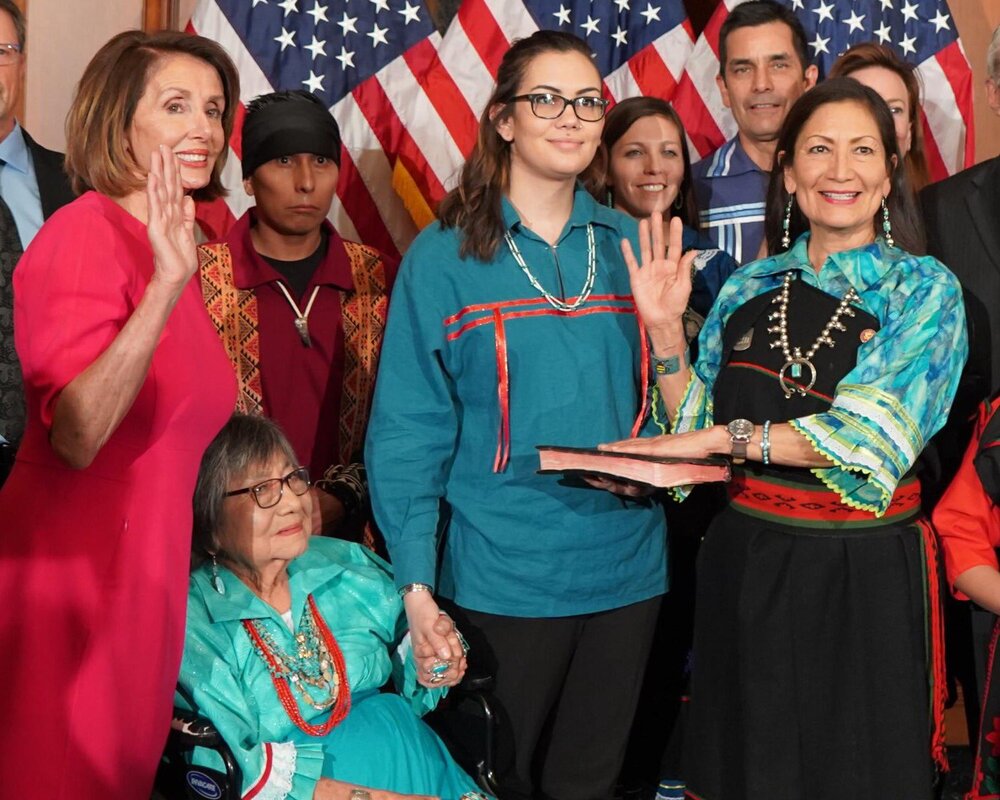 Deb Haaland sworn in to Congress by Speaker Pelosi wearing her traditional Pueblo clothing. She is here with her daughter (left), her mother (seated), and her extended family, on Jan. 3, 2019.

Once in Congress, Haaland took on two leadership roles: vice chair of the entire committee and chair of the Subcommittee on National Parks, Forests and Public Lands. Haaland often found herself across the table from Trump appointees Ryan Zinke and David Bernhardt. Committee chair Rep. Raúl Grijalva describes the relationship with the Interior Department during those years as one of "daily combat."

"She will raise the profile of this committee," Rep. Grijalva says. "The whole general area around environment, public lands, Native Americans, our oceans, our waters — all of a sudden you have a secretary who is going to raise it, and raise the support for those issues, and that's important for the work we do."

If confirmed, Haaland "will be tasked with carrying out Biden's moratorium on new oil and gas leasing on public lands, a move that has rankled Republicans from states in the fossil fuel business who are now coming out in opposition to her nomination," reports the Washington Post.

In the past week, Sens. Steve Daines of Montana and John Barrasso of Wyoming, have made statements in opposition to Haaland, calling her a radical. These two senators are favorites of the oil and gas industry, which has given them $1.16 million each, according to the Center for Responsive Politics.

"Daines's attempt to paint Haaland, a 35th-generation New Mexican and by all standards a qualified nominee for the post, as an extremist threat to America is, well, extreme," reports HuffPost. "Although Daines's effort is unlikely to succeed, he stands out as the first senator to expressly oppose Haaland for the powerful position."

It's yet more evidence that Haaland is a force for change that threatens the status quo. As she said shortly after her election in 2018, "If we don't have our Earth, we don't have anything," she said. "I am going to always talk about that." And we'll be listening.

Ms. Haaland, a heartfelt feminist welcome to the table.