Democrats snatch defeat from the jaws of victory on impeachment 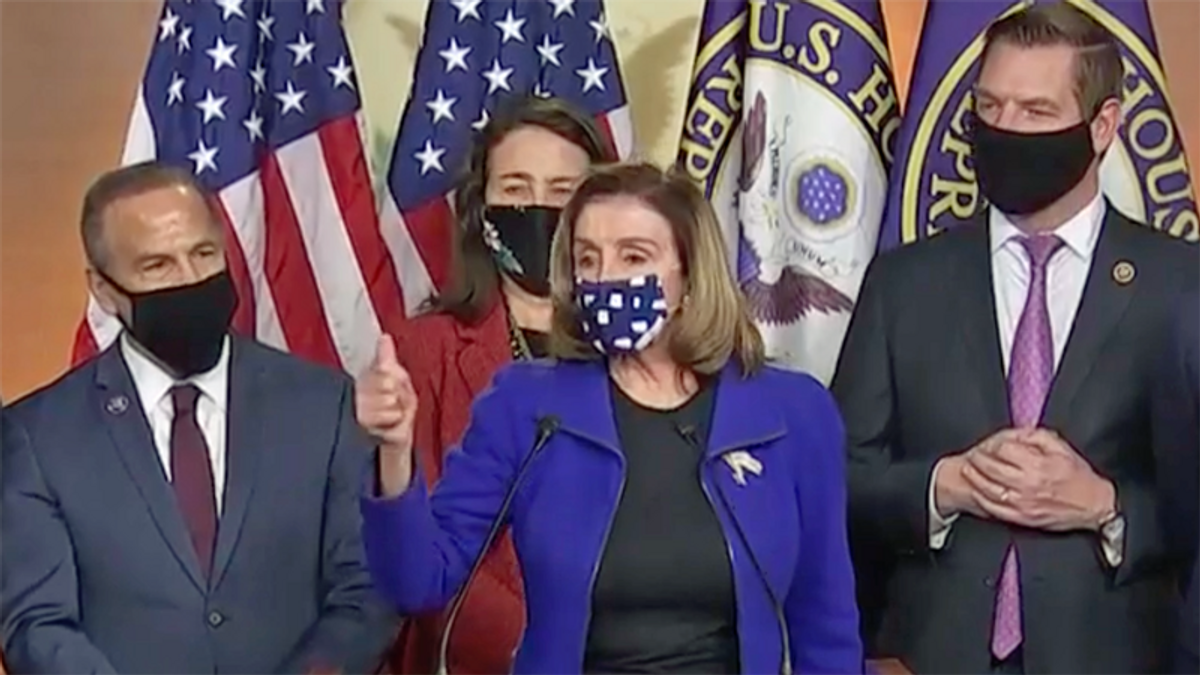 Just when it appeared that the Republicans were rattled and on the ropes at the Trump impeachment trial -- distraught at the unexpected prospect of witnesses extending the proceedings -- the Democrats inexplicably let them off the hook.

It was unbelievable. At the moment the Democrats had won their easy, bipartisan, 54-46 victory this morning on the issue of calling witnesses, the Republicans were clearly rattled. Trump's third-rate personal-injury lawyer was blathering about calling 100 witnesses or more and drew loud and spontaneous laughter from the Senators by insisting depositions would be held "in my office in Philly-delphia."

At least one shouting match ensured on the Republican side. Senators Lindsey Graham and Ted Cruz rushed to social media and microphones to issue bluffs about calling House Speaker Nancy Pelosi and others as a witness--as if she wouldn't have loved the chance to destroy his clown-car legal team.

When the Senate hastily retreated to respond to the spontaneity of the moment, Senate Minority Leader Mitch McConnell conspicuously stayed on the floor rather than strategize with Trump's defense, a point reported smartly by former Senator Claire McCaskill in her role as an MSNBC analyst. The Republicans were not unified.

It was a chaotic moment -- made for TV, but most definitely not for senators who prefer predictably in their public proceedings -- and it promised to hang a cloud of uncertainty over it all. With the Senate facing a week's recess, it was the nightmare scenario for dozens of Republicans padlocked to their need to vote against their consciences of Trump's behalf.

The House managers had performed splendidly throughout the trial -- dramatically more effectively than their counterparts from the previous impeachment -- and Trump's pathetic team was thoroughly overmatched. Extending the one-sided process -- even by just a week -- was all upside for the Democrats.

So what did they do? They let the Republicans go. Essentially compromising with themselves, Democrats passed on the possibility of bringing dramatic and compelling testimony from Rep. Jaime Herrera Beutler, R-Washington. Beutler, just one of 10 Republicans courageous enough to vote to impeach Trump, was ready, willing and able to tell her story.

Would it have improved upon the impressive 57-to-43 bipartisan margin that ultimately acquitted Trump by not reaching the 67-vote threshold to convict? Probably not. But there was no good reason not to find out. And politically speaking, each day was bringing little victories.

The Senate recess meant little or no time would have been lost by waiting patiently and seeing what would come of Beutler's testimony or anyone else's. The Democrats had full control of the process. Were it to drag on too long and impact President Joe Biden's agenda, they had the votes to end it on a moment's notice, at their sole discretion.

It's as if the Democrats have been in the minority so long that they don't know how to wield the power of a majority, as McConnell did so brutally for the last decade. They held all the cards but didn't act like they knew it.

Apparently, the Democrats were concerned that the witnesses wouldn't add much or that their testimony was uncertain. Lawyers never want to put a witness on the stand without knowing what their testimony will be, but that rule hardly should apply in a case in which one is certain to lose without that witness. There was no risk. Why not roll the dice on spontaneity?

There was nothing to gain from taking a certain loss today, and nothing to lose by waiting a week or two (or more) to put more pressure on the beleaguered Republicans. Winning the witness vote today with four Republicans in support of the motion had been a fine triumph, but the Democrats inexplicably chose not to savor it.

Republicans holding their noses to vote for Trump would have been tormented at home by many supporters -- especially contributors -- who are not on the Trump train. Nothing good was coming to them from a delay.

The prospect of more bad developments -- from witnesses or news stories -- loomed as a dark cloud over those Republicans. Conversely, nothing exculpatory was going to break that would make supporting Trump easier. But thanks to the Democrats, the nightmare ended for them.

This was twisted. At the end of the proceeding, McConnell had the chutzpah to give a fiery speech making a passionate case for why Trump was singularly responsible for the insurrection and deserved impeachment. McConnell, the man who singularly assured that the Senate would not take up Trump's impeachment until he left office, declared Trump couldn't be impeached because -- yes -- he was no longer in office.

It was more obvious than ever after hearing McConnell's strange epilogue that Democrats had folded with a strong hand. The Republicans had nothing going for them and the risk of getting hoisted on their own petard was growing every day.

How long might the process have lasted had the Democrats not chosen to walk away? No one would have known for sure, especially Republicans terrorized by the uncertainty of it all.

That was the point.