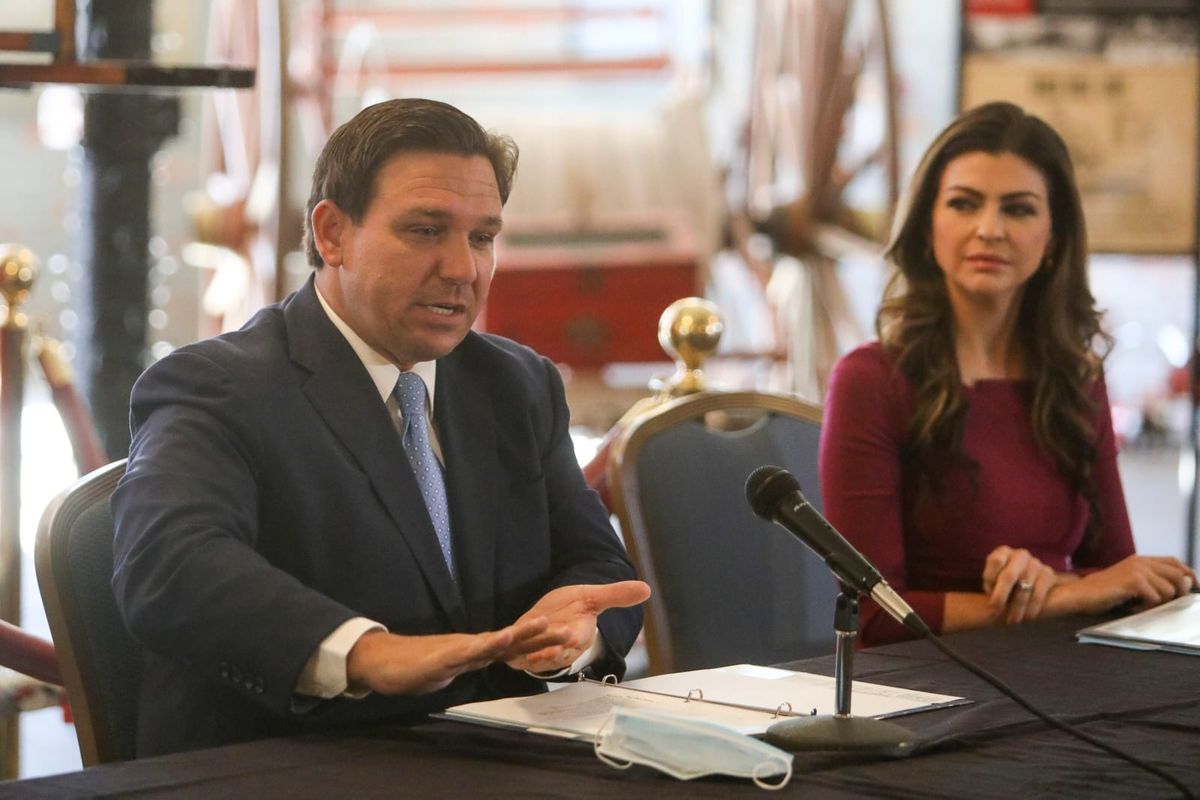 The day after Florida Gov. Ron DeSantis signed S.B. 90, the voter suppression law pushed by his state's Republican legislators, the advocacy group People for the American Way demanded information about how the signing of the bill came to be closed to all media other than Fox News.

The group filed a Freedom of Information Act request (pdf) Friday calling on the governor's office to release all communications and records related to the planning and execution of the signing, which was made available to "Fox & Friends" viewers via an exclusive live feed.

The signing took place in West Palm Beach at Club 45, an organization which supports the agenda of former President Donald Trump.

PFAW's request noted that even "The FLORIDA Channel, the state's taxpayer-funded television channel of record," was excluded from covering the signing of a bill which will directly affect Florida voters in upcoming elections, as it restricts the use of mail-in voting and ballot drop boxes and forbids people and groups from giving any "items"—including food and water—to voters who are waiting in line to cast their ballots.

Republicans including DeSantis, PFAW said in a statement Thursday, are "doing everything they can to reinstate disenfranchisement and disempowerment of the people in an attempt to regain power. The legislation signed by Governor DeSantis is a voter suppression bill pure and simple."

Adele Stan, director of PFAW's Right Wing Watch project, signed the FOIA request and issued a statement Friday accusing DeSantis, who is believed to have presidential ambitions, of orchestrating "a self-serving publicity stunt at the same time he is signing away his constituents' constitutional rights."

"He chose a very specific and national audience before which to display his bona fides in advancing the false narrative of widespread voter fraud in order to disenfranchise Floridians," Stan said. "We look forward to finding out more about how and why this event was planned."

By broadcasting the event for a national audience on a network which amplified false claims by DeSantis and Trump last year about fraud in the 2020 election, PFAW President Ben Jealous said, "DeSantis's antics went from deplorable to disgusting."

"Depriving people of their voting rights is a deeply vile attack on civil rights, and DeSantis turned it into a sleazy publicity grab," said Jealous. "We filed this FOIA request because the people of Florida deserve to know the rationale behind DeSantis's actions, including the reasons why other press were excluded from the event. We, and they, could make a pretty good guess, but we'd rather just know the facts."