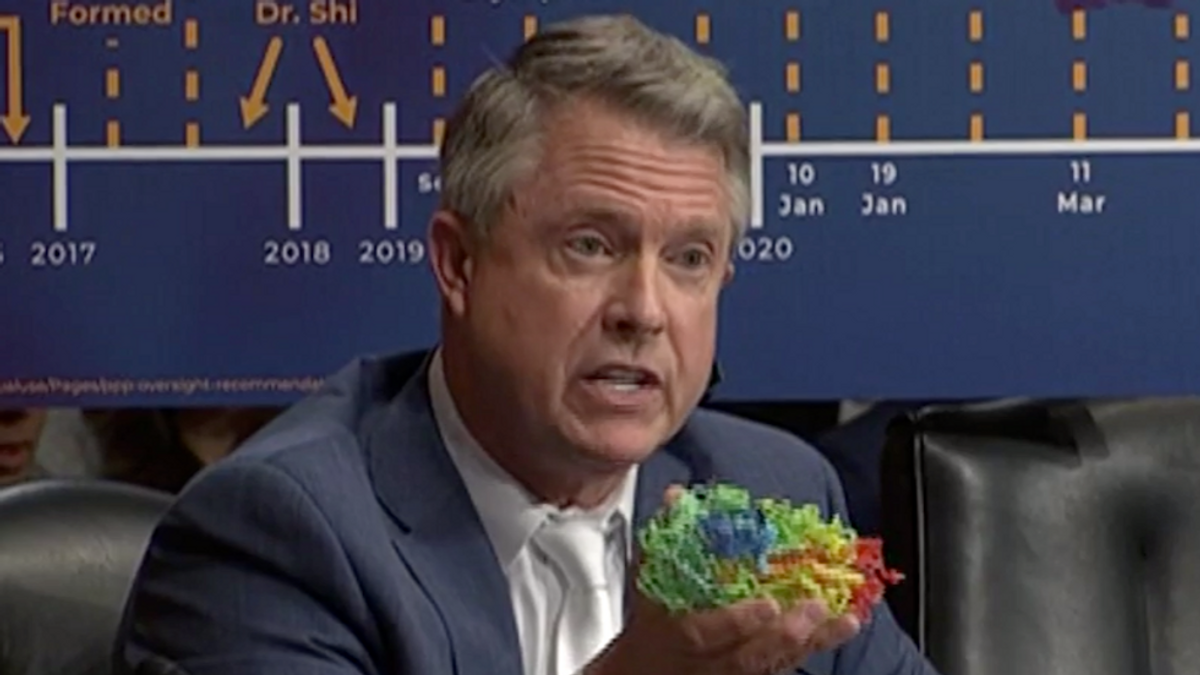 Elected officials owe their constituents more than representation. They owe them the truth.

That's proven to be a challenge in the age of COVID-19, with reactions to a public health crisis polarized along partisan lines. One party has largely followed medical experts and their advice, while the other has created a disinformation caucus, putting Kansans' lives at risk with deceitful rhetoric and poisonous lies.

These aren't tall tales about a president's birthplace. These aren't salacious rumors about adultery or past membership in the Communist Party. These are outright conspiracy theories — supported by coded language from politicians who should know better — that have led to Kansans refusing lifesaving vaccines and masks. Each statement builds on the others, creating a self-reinforcing narrative that has fueled wave upon pandemic wave.

Not every Republican is to blame, but elected leaders across Kansas eagerly signed up for the disinformation caucus, repeatedly spreading rumors, distortions and delusional fantasies. Let's take a look at what they have to say.

Kansas Rep. Bill Rhiley, R-Wellington, on his Facebook page, April 22: “Employees of these Hospitals, Costcos, Lowes, Restaurants, Mental Health Centers, Clinics, and other businesses that are requiring masks should get lung xrays after wearing mask for a year. They might find that their lungs are enlarged, and have COPD like conditions from breathing Carbon Dioxide by for a year."

It might interest Rhiley to know that face masks existed before 2020. Indeed, both medical personnel and civilians have worn them for decades. Think about this just for a second: Doctors often wear face masks for lengthy shifts, throughout their careers. Don't you think they would notice any enlarged lungs or COPD-like conditions?

Face masks don't limit oxygen, and carbon dioxide disperses through the mask. They are worn by health providers and recommended to the public for a simple reason: Masks reduce your chance of spreading or catching a contagious respiratory disease.

Kansas House Speaker Ron Ryckman, R-Olathe, in a letter to Gov. Laura Kelly, Aug. 25: “Varying opinions exist in the medical community when it comes to masks. In fact, some local health care professionals have said not requiring masks will allow a slow return of letting our bodies learn to internally fight diseases and allow our immune systems to work, particularly when paired with vaccination."

Being speaker of the Kansas House of Representatives is a big job. You lead one of two chambers in the Legislature, shape laws and take potshots at the governor. Who has time to study medical consensus on masks and whether they protect people from COVID?

Ryckman can thank the Kansas Department of Health and Environment for doing just that.

Kansas Sen. Mark Steffen, R-Hutchinson, on his Facebook page, June 12: “Fauci, big tech, government agencies (national, state, and local), and doctors (one in particular in Hutchinson) conspired to block early treatment with HCQ and ivermectin. This conspiracy killed tens to hundreds of thousands of innocent people. Manslaughter or premeditated murder? The Courts will decide."

National Institute of Allergy and Infectious Diseases director Anthony Fauci somehow plotted with companies like Facebook and Google; government bureaucracies in Washington, D.C., Topeka and your own hometown; along with health care providers across the nation, to suppress lifesaving treatments for COVID-19. And they conspired to do so, meaning that many thousands secretly schemed to harm Americans. Was any of this intentional? At least Steffen envisions a role for the judicial branch: “The Courts will decide." This is, frankly, nuts.

Alas, hydroxychloroquine and ivermectin don't appear to help COVID-19 patients. It would be great if they could! Studies have been conducted, but the results unfortunately fell short. That's not a conspiracy. That's how research is supposed to work.

Kansas House Majority Leader Dan Hawkins, R-Wichita, in his newsletter, Aug.6: “Nothing about these recommendations makes sense. Mask mandates have not been shown to be effective and healthy children have had few issues with COVID."

Hawkins is dead wrong. Mask mandates have saved Kansans' lives. Multiple studies — including those from the CDC and University of Kansas researchers — have shown the policy limits cases and deaths. Perhaps Hawkins disagrees with mandates from an ideological perspective, but as those from his party have often proclaimed, facts don't care about your feelings.

We can have legitimate debates about the effects of COVID on children. But again, facts are facts. Kansas has recorded 234 pediatric hospitalizations and two deaths since the pandemic's start. On Aug. 9, a peak of 29 kids were hospitalized across the state. The numbers may be small, but the children are real.

Kansas Sen. Mike Thompson, R-Shawnee, on his Facebook page, Aug. 18: “Our liberties are in serious jeopardy over a non-FDA approved pathogen stimulating gene sequence [the vaccine]. And, some people are getting seriously ill unnecessarily because they are not given life-saving FDA approved off-label drugs that are inexpensive and available."

The FDA gave full approval to the Pfizer vaccine on Aug. 23. But I didn't see a follow-up post from Thompson urging his readers to take the vaccine (which, it should go without saying, doesn't change your DNA). As for stimulating pathogens, experts agree that we face the biggest threat in unvaccinated people, who are breeding grounds for further variants.

As for the supposed lifesaving, off-label drugs, please see above. We haven't seen evidence supporting use of either hydroxychloroquine or ivermectin. You know what we've seen overwhelming evidence for around the globe? The success of COVID-19 vaccines.

U.S. Sen Roger Marshall on FDA approval of the Pfizer vaccine, Aug. 23: “I encourage you to talk to your doctor about the benefits associated with getting the shot and to determine if getting this fully approved vaccine is right for you."

The multi-titled Lord Rev. Sir Sen. Dr. Roger Marshall, Esq., has a medical background. He knows COVID-19 vaccines work and has cut an ad supporting them. But with GOP political winds blowing against common sense, his latest statement falls short.

Why? Dana Hawkinson, medical director of infection prevention and control for the University of Kansas Health System, put it this way in an online update last week (50:40): “In those cases where there are physicians not recommending getting dosed with the vaccine, either to you or your loved ones or your children, it's probably time to seek other providers. It would just worry me on what other complex issues they are not up to date with the current evidence, and what the current evidence supports for keeping you and your family safe."

When the next Election Day rolls around, remember the actions of those who purport to represent you. Did they tell you the truth? Did they strive to stop preventable illness and death?

Or did they treat the truth with the same disdain as they treated Kansans' health?