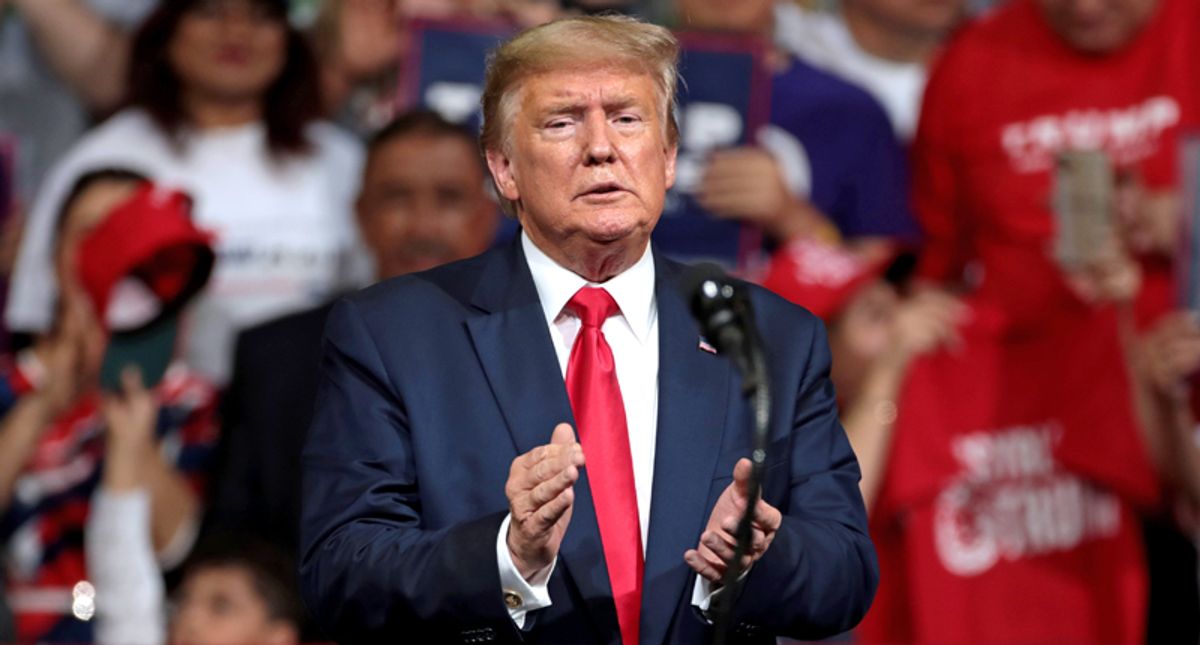 It is official, former President Donald Trump's campaign has been sent to collections for refusing to pay his security bills.

Raw Story has been following the complicated issue of the security debate since Trump entered official. The disagreement is that Trump's campaign believes that he shouldn't have to pay for any additional security because he's covered by the Secret Service. The problem with that is that the Secret Service is assigned to protect Trump, not run the security at a political event.

When Trump held a rally that needed police to direct traffic, crews to do overtime to scan for weapons at the doors, patrol the venue site or even remove protesters, those were local officers who Trump's campaign should have paid for.

As of July 2020, Trump had over $2 million in unpaid security bills that stacked up from Pennsylvania to New Mexico.

It was reported by the Albuquerque Journal in October that their city sent Trump an invoice for $211,175.94 for barricades and overtime for officers to be on hand for the event. At last check, that hadn't been paid along with the several other cities.

Business Insider reported in July 2020 that the Pennsylvania rally with former running mate Mike Pence was another campaign event that incurred a bill for handling security for a political event. Over the nearly five years that Trump has been running a campaign, he hasn't paid the bills to the city.

Now, the city of Albuquerque is demanding their payment. Trump's rally was held nearby in Rio Rancho, where city officials covered the security costs as Trump stayed at a hotel nearby, The Albuquerque Journal reported. But that didn't account for the thousands in costs spent to deal with his rally.

After Trump stiffed the city and still refused to pay, the city is fighting back.

In another debate, Trump refused to pay the city of Minneapolis after stacking up over $530,000 in security costs for a 2019 rally. The mayor there was furious and fought back at the time.

Trump and Mayor Jacob Frey got into it over $530,000 in security fees that the Trump campaign owed after a rally. So, the mayor tried to block the use of any and all further city-owned facilities until Trump paid up. The Trump campaign responded to it by threatening to sue the mayor. The campaign claimed that they were being denied access to the Target Center and that the "liberal" mayor was attempting to stifle free speech. The mayor responded by saying that in Minneapolis they pay their bills.

"As we continue confronting extraordinary challenges at the local level, our federal leaders have the opportunity – and obligation – to stand up for taxpayers by ensuring they're not left footing the bill for political events," Mayor Frey said in his statement. "We have a duty to protect free speech regardless of the content, but we don't have to subsidize it."

In their case, the Target Center agreed to eat $100,000 in the costs from the 2019 rally. That, however, presents a problem because $100,000 in corporate funds is a violation of campaign finance law. It's unclear if anyone has ever filed that complaint because it likely isn't included on Trump's campaign finance documents as an in-kind contribution.

It's unclear if other cities will follow the lead on sending the campaign to collections, but they certainly could. Trump continues to solicit money for his campaign and super PAC and both committees are still open.