Maddow likens Trump Org to Leona Helmsley: 'Kind of crime that super rich people think they can get away' 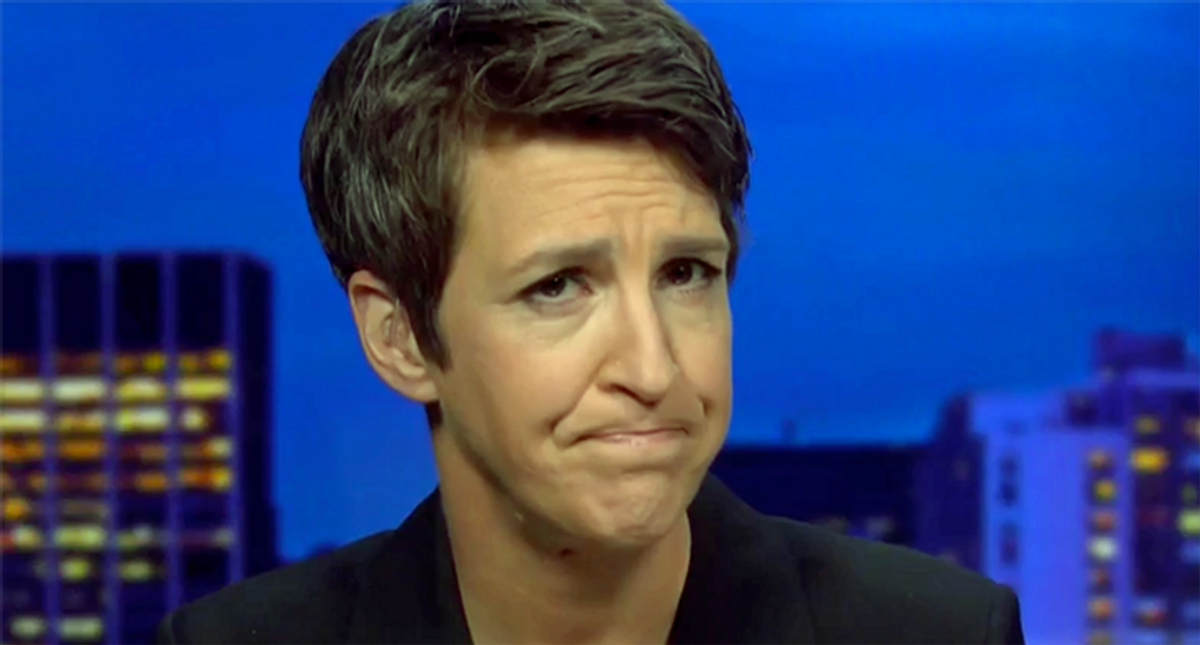 Known as the "Queen of Mean," Helmsley served nineteen months in prison and two years under house arrest after being convicted on federal charges for a tax evasion scheme.

"Real peach. 'Only the little people pay taxes.' She went to prison for that scheme, that scheme in which she used her business as a tool for chiseling petty tax fraud," Maddow said. "Which is both a crazy thing for a super rich person to bother with, right? And it turns out, it's the kind of crime that super rich people think they can get away with — and that they can get caught for, particularly if they are brazen about it."

She also noted the tax evasion scheme by Ali "Al" Yeganeh, who inspired the "Soup Nazi" Seinfeld character, who was also convicted.

"Running your business in such a way that your business provides personal stuff to executives of the company and then writes it off like those are business expenses, compensating the employees at your business in ways that are designed to hide that compensation from tax authorities, these are tried and true paths to prison," Maddow said.

"Even if you are not a tax accountant, if you are not somebody who studies these things, if you are somebody who watches 'Seinfeld' or read a newspaper in the '80s, even for comically high profile people, this is a tried and true way to end up in the crowbar hotel," she continued. "Which is why presumably most people who try to commit those crimes know that they ought to be subtle about it. Mostly, not all though. What new york prosecutors spelled out in court today was a variety of this kind of alleged crime that was, according to prosecutors, not at all subtle. The word we might use in not legal terms is brazen. the world the prosecutor used in court before the judge today was audacious. The prosecutor called it a 'sweeping and audacious illegal payment scheme.'"

When Helmsley found herself in crisis, Trump threw her under the bus, The Washington Post reported in 1989.

"In what must rank right up there with Truman chewing out MacArthur and Sondra Gotlieb slapping her secretary, Donald J. Trump has shaken the onyx and marble foundations of the hotel world by calling his equally overpublicized rival, Leona Helmsley, a "disgrace to humanity." In a deliciously vitriolic letter to the self-proclaimed Queen of the Helmsley hotel empire, The Donald (as he is called by his relentlessly glamorous wife Ivana) displays a previously hidden capacity for venom by slicing The Leona into tiny little pieces. 'Without the veil of Harry Helmsley, you would be a non-entity. You would not be able to randomly fire and abuse people in order to make yourself happy,' The Donald declares in the letter, which mysteriously made its way into the pages of the New York Post today," Howard Kurtz wrote.

Trump went on to act as a businessman in a reality TV show where he fired people.

"The Trump assault comes at a difficult time for Leona Helmsley, who is preparing for a June trial on charges of tax evasion and fraud involving millions of dollars in renovations to the couple's 26-acre estate in Greenwich, Conn. A federal judge ruled earlier this month that Harry Helmsley, 80, probably will be unable to stand trial with his wife because of poor health and a failing memory. The letter to Leona (more juicy excerpts in a moment) stems from (surprise) a financial dispute. To wit, casino magnate and multibillionaire developer Trump recently purchased a chunk of Atlantic City real estate from Penthouse International Ltd. for $56 million, and plans to convert an unfinished casino into a noncasino hotel. Included in the property is a small parcel owned by the Helmsleys that had been leased to Penthouse for 100 years. Trump charges that Leona Helmsley has refused to transfer the lease to him, in what should be a routine transaction, out of sheer animosity," Kurtz reported in 1989.