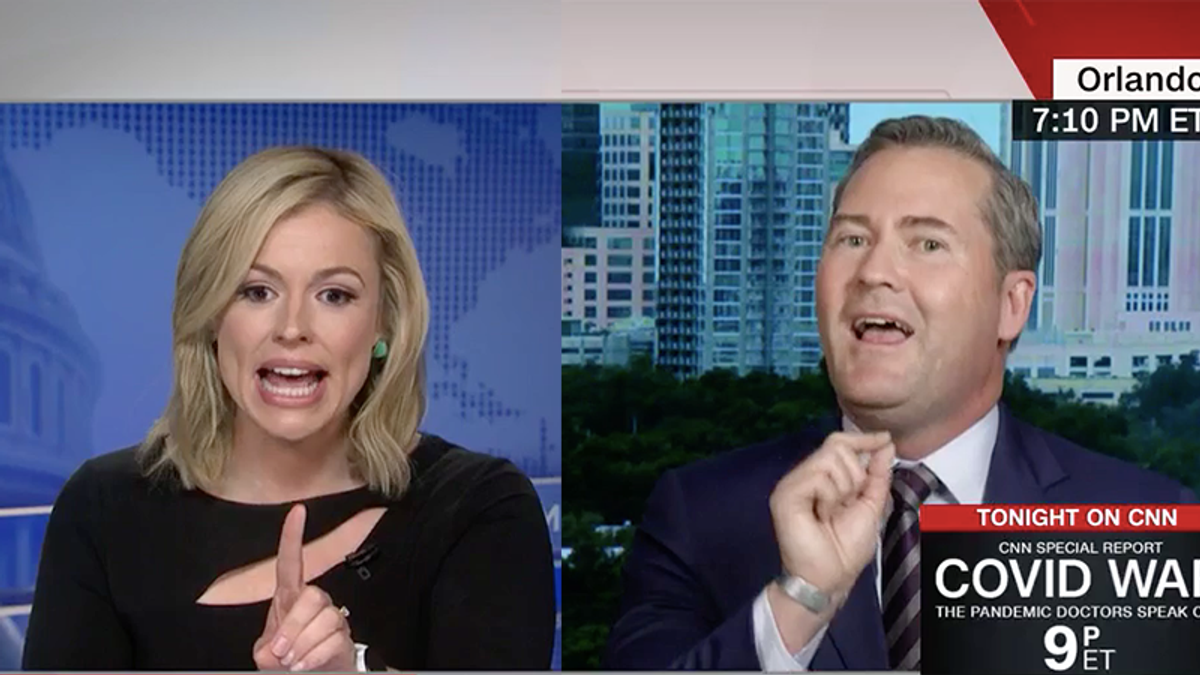 CNN host Pamela Brown was forced to fact-check Rep. Michael Waltz (R-FL) when he started making up his own facts about the election laws being passed in states across the U.S.

After President Donald Trump lost the election overwhelmingly, even in Republican states, GOP officials have looked for ways to restrict voting so that it won't happen again. Republican-led legislatures have passed a flood of voting restrictions, while the House Democrats have presented a bill that would ensure every American citizen had access to the polls. The effort could help get closer to 100 percent participation in the election, which some Republicans have indicated they oppose.

Sen. Ted Cruz (R-TX), for example, said that he doesn't like the idea of people on Welfare voting.

Brown began asking if Waltz even believes that Biden won the election since he initially planned to object to the election, but ultimately decided to support a peaceful transition of power.

Intelligence officials have called the 2020 election "secure" and Gov. Ron DeSantis (R-FL) even bragged that his state was the "most secure" and "fair" election "anywhere in the country." Brown wondered why then Republicans wanted to pass a slew of voting restrictions if they thought there was nothing wrong with the safety or security of the 2020 election. In Florida, in particular, there is a move to restrict vote-by-mail and reduce mail-in-vote drop boxes.

"That's an easy answer, Florida has been doing a strict, a very regimented process of vote by mail for many years, we are hurricane-prone," said Waltz. "We have a lot of seniors. You have to request the ballot, you have to prove with your I.D., who you are. And here's the thing, we knew all of our numbers and all of our totals on election night. You contrast that with states that changed the rules months in advance with unelected officials. You know, for example, in Pennsylvania, had ten times the number of mail-in votings in New York, they had could not even settle--"

Brown cut in to say that mail-in-voting was passed in 2019, though she didn't indicate which state.

"I let you ask, please let me answer," Waltz shot back.

"I need to fact-check," Brown explained.

"I can go an hour with you and fact check," Waltz threatened. "In New York, the facts are, because the system was overwhelmed with mail-in voting because election officials were pushing it, they could not get a Democratic primary counted for six weeks. So, i think this notion that states don't have the right to improve their elections over time is just a -- one. I would if I could --"

The facts are, Pennsylvania wasn't allowed to begin counting their votes before election night, which is why it took them so long to get their results, while Florida had their results on election night. In New York, election boards had ten times the number of mail-in ballots they expected, ABC News explained. There were also several legal challenges over thousands of ballots that slowed things, and a demand to canvas the votes, which also took longer. Because counting took so long, Trump decided that the election must be rerun.

Waltz went on to inaccurately say that Democrats presented their first bill H.R.1 on voting rights because they are the ones who see issues with the election. H.R. 1 is the number reserved for the Speaker to use to highlight the importance of the legislation, it isn't the first bill proposed by Congress in 2021, nor is it the first bill that was voted on or passed, that honor went to the stimulus bill. Waltz also twisted the things in the bill, such as reducing the age for voters to 16, which isn't true. The bill would allow young people to pre-register to vote at 16 two years before they turn 18 as part of a civics engagement effort. Lowering the age to vote to 16 would take a Constitutional Amendment.

Waltz then falsely claimed that Democrats were calling the new voting restrictions in Georgia "racist" to justify the need to pass the John Lewis Voting Rights Act.

The John Lewis Voting Rights Act was proposed in 2019, when it was called the Voting Rights Advancement Act of 2019, a full two years before Georgia proposed their voter suppression bill. It was after Lewis' death that they changed the name to honor him and his efforts to fight racist voting laws. That bill was proposed in 2020, a year ahead of the Georgia election changes. It was resubmitted in the 2021 legislative session.

See the rest of the argument in the video below: