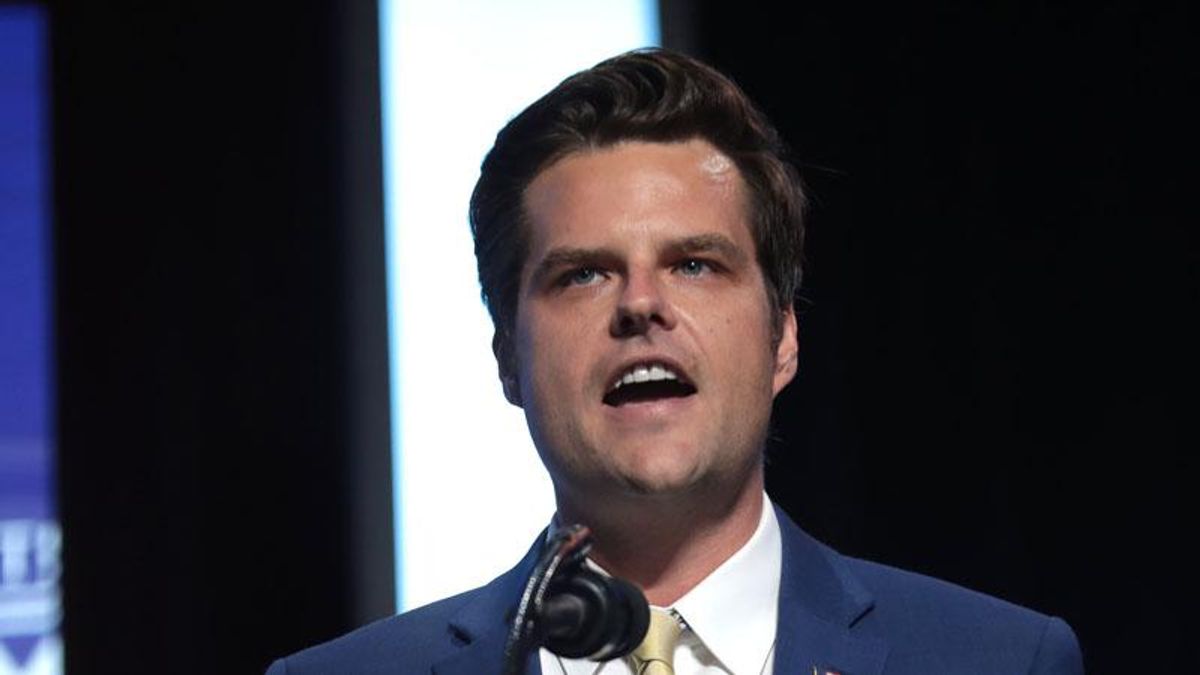 Congressman Matt Gaetz speaking with supporters at an "An Address to Young Americans" event. (Gage Skidmore)

Before the U.S. Supreme Court shot down a Texas lawsuit asking the High Court to throw out the presidential election results in four battleground states, a long list of House Republicans supported it — 126, to be exact. Of those 126, 31 were lawyers. And attorneys Neal R. Sonnett, Eugene R. Fidell and Dennis Aftergut, in an article published by the conservative website The Bulwark on December 22, argue that those 31 lawyers deserve to face tough legal sanctions for supporting such a frivolous and meritless lawsuit.

Sonnet and Aftergut are both former federal prosecutors, while Fidell is a senior research scholar at the Yale Law School. In the past, Sonnett served as president of the National Association of Criminal Defense Lawyers.

The 31 House Republicans they slam in their Bulwark article recently signed a "friend of the court" brief supporting a lawsuit filed by Texas Attorney General Ken Paxton, who wanted millions of votes thrown out in Pennsylvania, Michigan, Wisconsin and Georgia — four battleground states that President-elect Joe Biden won in the 2020 presidential election. Sonnett, Fidell and Aftergut stress, "Their role in this sordid affair should be known and renounced before the episode fades. The brief to which they lent their names abused the process of the highest court in the land. Their constituents and fellow bar members should know what they did."

Paxton's lawsuit, according to Sonnett, Fidell and Aftergut, was "preposterous" and indefensible.

"Its argument violated conservatives' core belief in federalism, that each state is sovereign," the attorneys stress. "If Texas' theory were the law, chaos would engulf every election because states supporting the loser could contest the results in states voting for the winner. The Court summarily dismissed Paxton's effort on December 11."

Paxton's lawsuit, they add, was full of "frivolous claims" that "violate the American Bar Association's Model Rule of Professional Conduct 3.1, which states that 'a lawyer shall not bring or defend a proceeding…. unless there is a basis in law and fact for doing so that is not frivolous.'"

Sonnett, Fidell and Aftergut go on to list the 31 House Republicans who signed that "friend of the court" brief supporting Paxton's lawsuit, and they range from Rep. Jim Jordan of Ohio, Rep. Ken Buck of Colorado, Rep. Louis Gohmert of Texas and Rep. Andy Biggs of Arizona to Rep. Matt Gaetz of Florida.

"These representatives also violated the oaths that they took as lawyers and members of Congress to uphold the Constitution," Sonnett, Fidell and Aftergut argue. "Attempting to disenfranchise millions of Americans in other states is antithetical to that duty. Constitutional scholar Garrett Epps called the claim to which they lent their names a 'deliberate effort to destroy American democracy for political advantage.'"

Sonnett, Fidell and Aftergut conclude their article by emphasizing that those 31 House Republicans dishonored the legal profession and must pay a price for it.

According to the attorneys, "Election to office does not exempt a lawyer from criticism by fellow practitioners or from potential bar discipline. Their breach of the rules of professional conduct was visible to the entire nation. Duty to the profession — and in this case, the country — calls upon the bar to find its voice. If our fellow citizens are to have an ounce of respect for the law and its institutions, the profession must condemn these 31 lawyers' abuse of the legal system for self-serving political purposes."