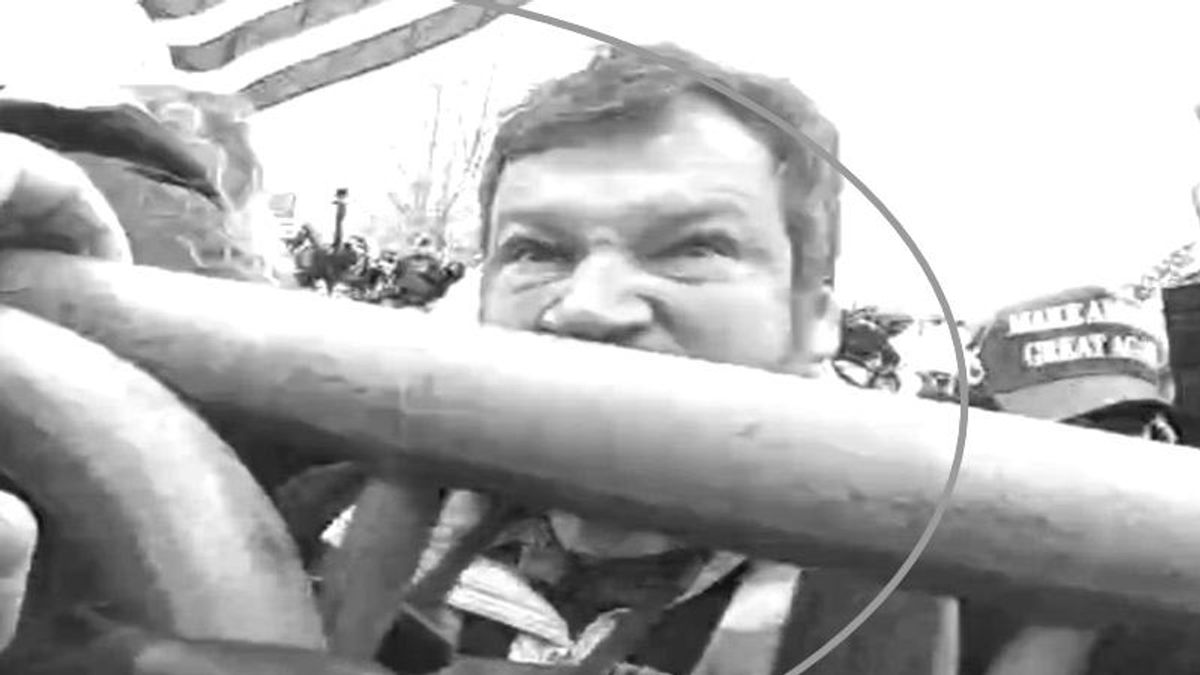 Evan Neumann was charged by the FBI Tuesday for assaulting police officers on January 6 during the Capitol riot. His case is a rarity: Details of the charges were released despite the fact that Neumann remains at large.

Neumann, 48, of Mill Valley, CA continues to occupy a spot on the FBI's Most Wanted list. He was captured on police bodycams at the riot wearing a MAGA hat and gas mask and launching both physical and profane verbal attacks against police, the FBI says.

Details of his violent action and profane tirade against police were released by the bureau just three days after Donald Trump ranted that there was "a lovefest" between Capitol Police and the insurrectionists and that the rioters were "tremendous."

Neumann had a strange way of demonstrating his love. Here's how the FBI describes his assault on an officer identified as "J.M" outside the Capitol.

"Neumann also refuses orders by police to move away from the barricade, telling the officers "No, you can't tell me what to do, you piece of sh*t."

Neumann put his gas mask back on and stood directly in front of J.M. for several minutes. Then he removed it again and can be heard telling the police they "kneel to Antifa because they're little b*tches," and saying that J.M. has "no pride, no honor, you're nothing." He then threatens J.M. that the officers will be "overrun" by the crowd, and says "I'm willing to die, are you?"

"Neumann punches toward J.M. and the officer to J.M.'s left with a closed fist. Neumann appears to make contact with the officers with his fist. After striking the officers, Neumann, now joined by more rioters, resumes his attempts to break through the metal barricades. This time, Neumann and the other rioters succeed in breaking down the barricades by ripping them back and away from J.M. and the other officers.

"As J.M. attempts to pull the metal barricade out of Neumann's hands, Neumann, now using the barricade as a battering ram, lifts the barricade off the ground and rushes toward J.M. and the other officers, crossing into the now-broken police line and striking them with the barricade."

Neumann was reported by an anonymous tipster identifying as a family friend. The FBI says it matched him with "with a 2018 press report by the local San Francisco, CA, ABC news affiliate documenting the case of Evan and Mark Neumann after they were arrested for violating orders not to enter a disaster area after a wildfire."