Even a limited nuclear war could devastate the world’s oceans: here’s what our modeling shows

The Conversation
A nuclear explosion (Shutterstock)

The US and Russia have recently agreed to hold talks on the New START Treaty, the only accord left regulating the two largest nuclear arsenals in the world. While this is undoubtedly good news, we must not allow it to lull us into complacency. Global events this year, most notably in Ukraine, have raised fears of a nuclear conflict to levels not seen since the cold war. There are more than 10,000 nuclear warheads remaining in the world, and the Kremlin’s language regarding weapons of mass destruction has became increasingly threatening in 2022.

Beyond the horrible fates of victims in the strike zones, a large-scale nuclear exchange would profoundly alter the climate system as we know it, while more limited scenarios could have a devastating impact. An ever-growing body of work has shown that even a local nuclear conflict could usher in a climate catastrophe. As marine scientists, we have considered what this could specifically mean for the world’s oceans. 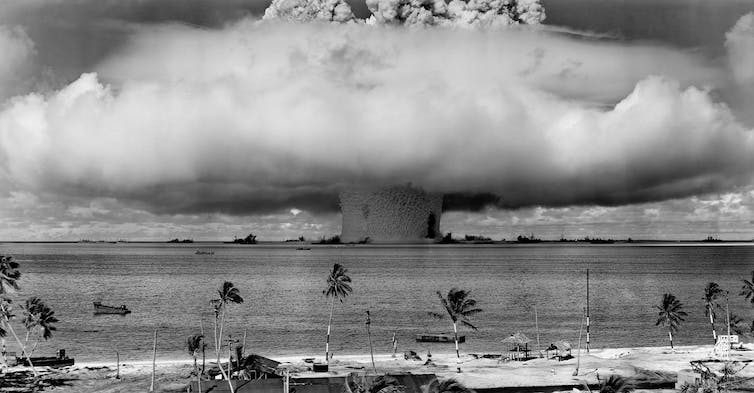 Between 1946 and 1958 the United States carried out a series of nuclear weapons tests on Bikini Island in the Pacific.

In 1982, a group of scientists including Carl Sagan began to raise the alarm on a climate apocalypse that could follow nuclear war. Using simple computer simulations and historic volcanic eruptions as natural analogues, they showed how smoke that lofted into the stratosphere from urban firestorms could block out the sun for years.

They found that this “nuclear winter”, as it came to be called, could trigger catastrophic famine far from the location of the war. Ronald Reagan and Mikhail Gorbachev, leaders of the United States and Soviet Union in the 1980s, both cited this work when they declared that a nuclear war could not be won.

The contemporary threat has prompted a new era of research into the potential climate impact of a nuclear war. Using the latest computational tools, we have investigated what the consequences would be for all life on Earth. In our most recent research, we show that a nuclear conflict would massively disrupt the climate system and cause global famine. It could also dramatically disturb the ocean and its ecosystems for decades and potentially thousands of years after a conflict.

How a nuclear war could ice over the Baltic Sea

We explored the scenario of a nuclear war between the US and Russia that results in 150 billion tons of soot from burning cities reaching the upper atmosphere. We found that the low light and rapid cooling would cause large physical changes to the ocean, including a dramatic expansion of Artic sea ice. Critically, this ice would grow to block normally ice-free coastal regions essential for fishing, aquaculture, and shipping all across Europe.

Three years after such a war, arctic sea ice expands by 50%, icing over the Baltic sea year-round and closing major ports such as Copenhagen and St. Petersburg. Even in the scenario of a more limited conflict between India and Pakistan, 27 to 47 billion tons of soot would be ejected into the upper atmosphere, and the resulting cooling would severely compromise shipping through northern Europe.

Worse, the sudden drop in light and ocean temperatures would decimate marine algae, which are the foundation of the marine food web, creating a years-long ocean famine. While the whole ocean would be affected, the worst effects would be concentrated at higher latitudes, including all of Europe and especially in the Baltic states, where ocean light is already in short supply.

The waters in the Arctic and North Atlantic would bear the brunt, likely triggering the collapse of the entire ecosystem. Although fisheries are currently a relatively small sector of the European economy, there might be added pressure to look toward the sea for food should land-based agricultural systems collapse, leaving the continent with few options for food security.

We expected that a reduction in sunlight and lower temperatures would cause more sea ice and less algae in the oceans. However, we were shocked that our model ocean remained materially transformed for decades after a war, long after temperature and light conditions returned to their pre-war state. Sea ice would settle into to a new expanded state where it would likely remain for hundreds of years.

Ten years after the conflicts, global marine productivity recovers, and even overshoots its initial state. This occurs because enduring changes to ocean circulation push nutrients up to the surface from depth. Once the soot clears and light recovers, phytoplankton can use these nutrients to grow rapidly. 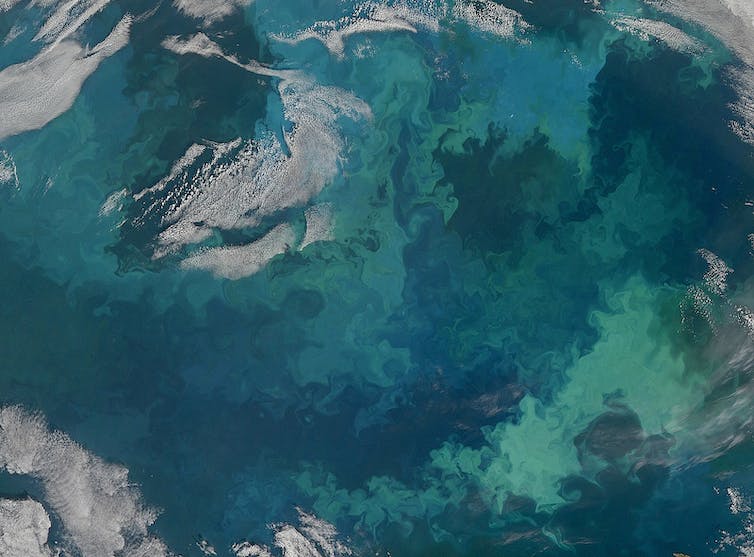 Phytoplankton blooms in the Barents Sea.

Unfortunately, such “good news” never reaches Europe, as marine productivity remains compromised in the Arctic and north Atlantic relative to the rest of the world. This occurs because the new environmental state favours a different, larger, type of marine algae that can actually strip nutrients from the surface ocean once they die and sink, counteracting the physical surplus.

Why would the ocean be so slow to recover from a nuclear conflict? Water heats and cools very slowly, and the ocean is strongly stratified with different water masses layered on top of each other. This gives the ocean a much longer “memory” than the atmosphere. Once disturbed, many changes are either not reversible on human timescales or are unlikely to return to their initial state.

These findings add a new perspective on just how much humanity can affect the Earth system. While we are grappling with the fact that our greenhouse gas emissions can reshape the climate in a blink of geological time, it is worth remembering that nuclear arsenals remain large enough to fundamentally shift the Earth system in the blink of an eye.

The long and the short of it

Given these stark insights, there is a moral imperative to ask what could and should be done to prevent a nuclear conflict. Recently, a new take on an old philosophy has begun to percolate out of Oxford. The idea, known as “longtermism”, posits that proper accounting for the sheer number of possible future human lives should prioritise nearly any action that even slightly reduces the risk of a human extinction. 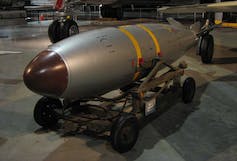 A Mark 7 nuclear weapon at the US Air Force museum in Dayton, Ohio.

This logic comes with all the standard trappings of trying to do maths with morality, but it starts to make a lot more sense when you realise that the risk of an extinction-level event – and thus the chance we could avert it – isn’t actually unimaginably low.

Even a more limited conflict could push our oceans into a fundamentally new state that lasts much, much longer than we would have expected. Understanding the length, and the weight, of these timescales should be forefront in our calculus of ongoing diplomacy.