Cave explorers have traversed what’s now the deepest known cave in Australia. On Saturday a group of explorers discovered a 401-metre-deep cave, which they named Delta Variant, in Tasmania’s Niggly-Growling Swallet cave system within the Junee–Florentine karst area. Its depth just beat out its predecessor, the Niggly Cave, by about four meters.

With a descent that lasted 14 hours and took many months to prepare for, Delta Variant is causing a stir among explorer communities.

But it holds a different kind of fascination for researchers such as myself, who study the interaction between groundwater and rocks (including in the context of caves). This helps us learn about natural processes and how Earth’s climate has changed over millions of years.

Exciting as Delta Variant is in an Australian context, it is arguably just an appetizer in the wider world of caves; the deepest known cave, located in Georgia, goes more than 2.2 kilometers into the earth.

So how exactly do these massive geologic structures form, right under our feet?

How do caves form?

Karst is made of tiny fossilized microorganisms, shell fragments and other debris that accumulated over millions of years. Long after they perish, small marine creatures leave behind their “calcareous” shells made of calcium carbonate. Corals are also made of this material, as are other types of fauna with skeletons.

This calcareous sediment builds up into geological structures that are relatively soft. As water trickles down through crevices in the rock, it continuously dissolves the rock to slowly form a cave system.

Unlike much harder igneous rocks (such as granite), calcareous rocks dissolve on contact with water that is naturally acidic. When rain falls from the sky, it picks up carbon dioxide from the atmosphere and soils along the way, which makes it acidic. The more acidic the water, the faster it will erode karst material.

So, as you can imagine, cave formation can become quite complex: the specific composition of the karst, the acidity of the water, the level of drainage and the overall geological setting are all factors that determine what kind of cave will form.

In geology there’s a lot of spatial guesswork. Being able to see how deep a cave formation goes is a bit like getting into the deepest layers of a cake, where you may not find the same thing in all directions.

From a research perspective, caves are incredibly valuable because they contain cave deposits (or “speleothems”) such as stalagmites and stalactites. These are sometimes spiky things that point up from cave floors, or droop from the ceilings, or form beautiful flowstones.

Cave deposits form as a result of water passing through the cave. Like trees, these contain growth rings (or layers) that can be analyzed. They can also include other chemical signatures the water contained, which can reveal processes that occurred at the time of formation.

While they may not seem like much, we can use these deposits to unravel past secrets about Earth’s climate. And since they’re a feature of the interaction between rock and water during cave formation, we can basically expect to find them in most caves. 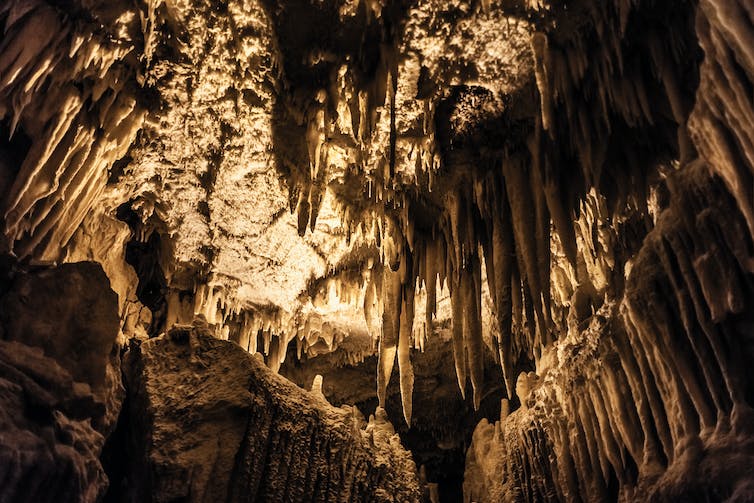 Stalagmites and stalactites can be very ancient. They contain growth layers that enclose secrets of the past.

How deep can we go?

Descending deep into a cave system is no small feat. You can’t use your mobile (since there’s no reception), it’s incredibly dark and you’re usually relying on a guide line to find the way back out. There could be many dead ends for explorers, so effectively mapping the space requires time and great spatial exploration skills.

While cave systems are usually stable (shallow caves can in theory collapse and form sinkholes, but this is very rare) – there’s always risk. The unexpected geometry of caves means you could find yourself making tricky maneuvers, twisting and swaying in all kinds of uncomfortable manner as you abseil into darkness.

Although the air pressure doesn’t change to a dangerous extent as you descend, other gases such as methane, ammonia and hydrogen sulfide can sometimes pool and lead to suffocation risk.

Despite all of the above, cave exploration is something people continue to do, and it brings great benefit for researchers in various sub-fields of geology.

And though we’ve come a long way, there are always nooks and crannies we can’t get inside – after all, humans aren’t tiny. I’m sure there are are small spaces, too snug for us to explore, that open into much longer or bigger systems than we’ve ever discovered.