Defenders of the U.S. Postal Service are urgently renewing their calls for the ouster of Postmaster General Louis DeJoy as his 10-year plan to overhaul the cherished government institution is set to take effect Friday, ushering in permanently slower mail delivery while hiking prices for consumers.

"DeJoy calls his plan 'Delivering for America,' but it will do the exact opposite—slowing many First Class Mail deliveries down, taking their standard from three to five days," Porter McConnell of Take on Wall Street, a co-founder of the Save the Post Office Coalition, warns in a video posted online late Tuesday.

"Slower ground transportation will also now be prioritized over air transportation," McConnell added. "These new service standards won't improve the Postal Service—they will make it harder for people all across the country to receive their medications, their bills, their paychecks, and more."

Appointed in May 2020 by the U.S. Postal Service Board of Governors, DeJoy—a major donor to former President Donald Trump—sparked a nationwide uproar by dramatically slowing mail delivery in the run-up to that year's pivotal elections, which relied heavily on absentee voting due to the coronavirus pandemic.

"We're still wondering why the hell Louis DeJoy is still Postmaster General when he's doing this to USPS."

But DeJoy, who can only be fired by a majority of the USPS board, has clung to his job despite incessant demands for his resignation or removal over the past year. In recent months, calls for DeJoy's termination have intensified as his conflicts of interest and past fundraising activities continue to draw scrutiny from watchdogs and the FBI.

During a House Oversight Committee hearing in February, DeJoy made clear he has no intention of leaving his post voluntarily.

"Get used to me," he told lawmakers.

Despite widespread criticism of his performance as head of the USPS, DeJoy still enjoys the enthusiastic backing of key postal board members, including Chairman Ron Bloom, a Democrat. Bloom, along with five other officials on the nine-member board, was appointed by Trump.

Ronald Stroman, the former deputy postmaster general and one of Biden's picks, called DeJoy's plan "strategically-ill conceived" during a postal board meeting in August.

Presented as a roadmap toward "financial sustainability and service excellence," Stroman warned that DeJoy's initiative "creates dangerous risks that are not justified by the relatively low financial return, and doesn't meet our responsibility as an essential part of America's critical infrastructure." Experts have noted that the Postal Service's recent financial woes are largely the fault of an onerous congressional mandate that requires the USPS to prefund retiree benefits decades in advance.

"There is no compelling financial reason to make this change," Stroman said of DeJoy's plan. "The relatively minor savings associated with changing service standards, even if achieved, will have no significant impact on the Postal Service's financial future."

On top of lengthening mail delivery timelines and raising prices, DeJoy's strategy (pdf) would slash Post Office hours across the nation and consolidate mail processing facilities—a plan that the 200,000-member American Postal Workers Union condemned as a "slap in the face."

After DeJoy rolled out his 10-year blueprint in March, a group of House Democrats ominously predicted the plan would ensure the "death spiral" of the Postal Service

Citing USPS spokesperson Kim Frum, NPR reported Tuesday that "beginning October 3 and ending on December 26, the postal service will temporarily increase prices on all 'commercial and retail domestic packages' due to the holiday season."

"In August, the Postal Service announced its standard for first-class mail delivery was met 83.6% of the time throughout the quarter ending June 30, in comparison to its 88.9% performance during the same period in 2020," NPR noted.

As USA Today summarized, "USPS mail delivery is about to get permanently slower and temporarily more expensive."

To limit and potentially reverse the damage DeJoy has inflicted on the USPS, watchdog groups and progressive advocates are ramping up pressure on Biden to take immediate action.

While the president can't remove DeJoy on his own, analysts have noted that he can soon replace both Bloom—who is currently serving a one-year holdover term—and John Barger, whose term expires in December. Such steps would give Biden appointees a majority on the USPS board—and potentially the votes to oust the postmaster general.

"President Biden has the power to remake the postal governing board and remove DeJoy," McConnell said in her video Tuesday. "He must act soon to name two new governors who understand the Postal Service is essential and must be strengthened as a beloved public institution."

Lisa Graves, executive director of True North Research, told Common Dreams that "the American people deserve a Postal Service with leaders devoted to ensuring that this public institution provides fast and affordable mail and other public services like postal banking."

House gears up to subpoena DeJoy over his refusal to turn over documents: report 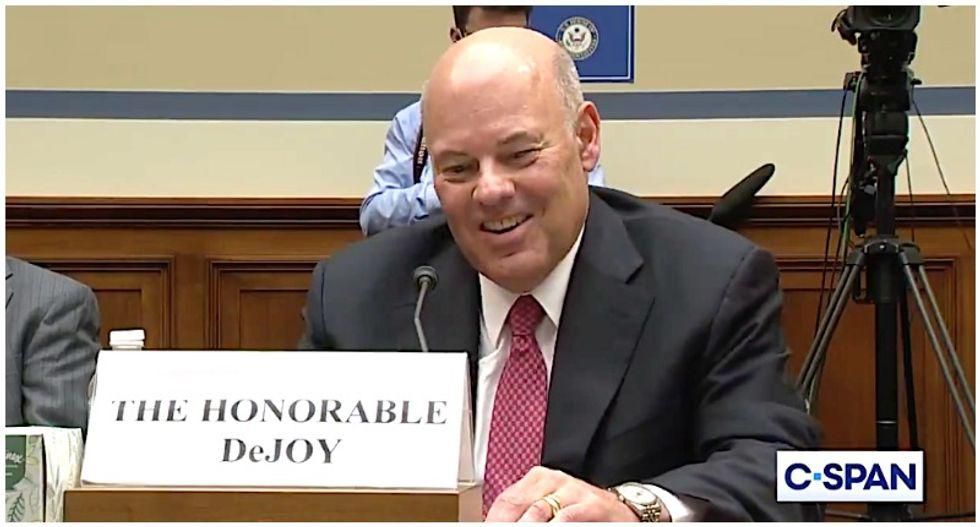 "Instead with DeJoy and the majority of the board Trump appointed," Graves added, "we have seen the Postal Service politicized, a series of poor decisions that have caused severe delays, issued directives that will charge people more for slower mail, and rebuffed innovations like postal banking."

This story has been updated with comment from Lisa Graves, executive director of True North Research.

Opinion SmartNews Video
Please contact support@rawstory.com for customer support or to update your subscription. Report typos and corrections to: corrections@rawstory.com.