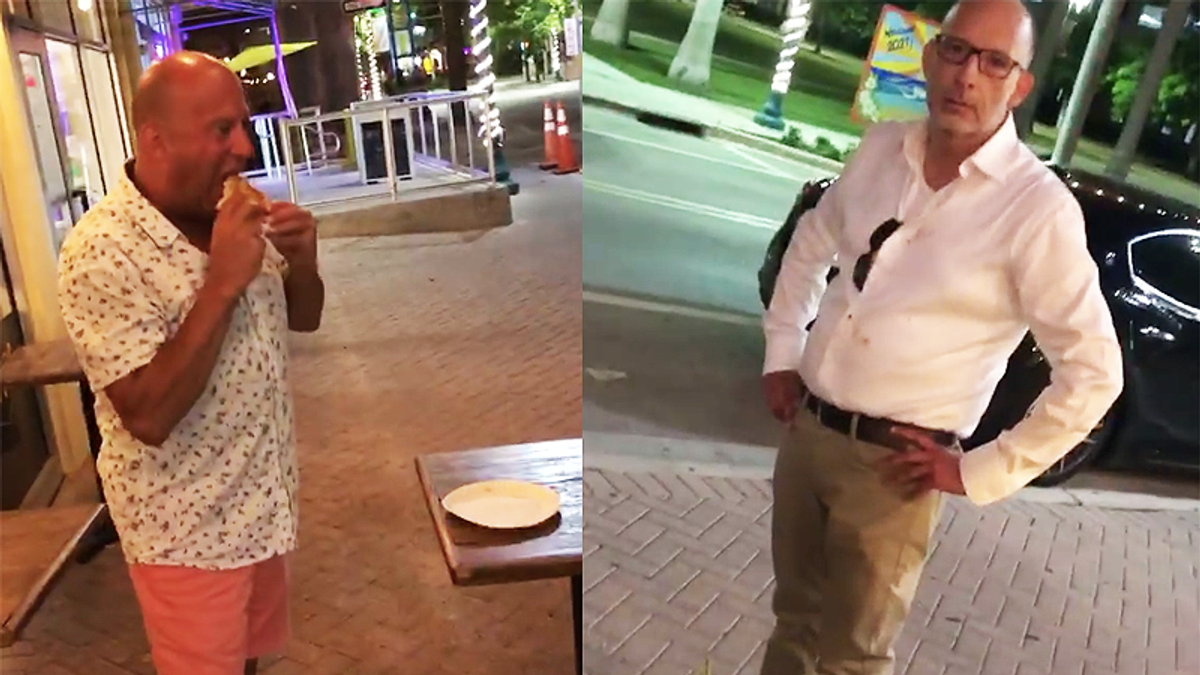 Three Florida men last week were caught on camera going off on an anti-Asian rant at a business owner, WPTV reported Monday.

According to WPTV, the racist incident happened outside of the Ramen Lab Eatery in Delray Beach and owner Louis Grayson captured it all on video.

Grayson, who is of Asian descent, explained that his staff was closing for the night. While stacking up chairs outside, three men walked up to the business and attempted to sit down at the table. The confrontation got heated and several anti-Asians insults were hurled.

That's when Grayson started recording, asking them to leave. They refused, continuing with an expletive-laden rant. One of the men appeared to understand that Grayson was filming them and whipped out his own camera to record Grayson, who was saying, "I'm asking you nicely, bro. We're trying to close. I'm asking you nicely. There are benches around the corner."

"Take your f*cking China flu and shove it up your ass," one of the men was caught on camera saying. "I hope you f*cking die of corona."

In a followup Facebook post, Grayson denounced bigotry and emphasized that his business is welcoming to all in the community.

"We have zero tolerance for violence," Grayson wrote on Facebook. "We are [an] honest hard working business. We stand against any type of racism, harassments (sic) and discrimination. We pride ourselves in having a multicultural environment. Unfortunately, this situation was very heartbreaking and will not break our spirits. We will not accept this type of behavior and attack on anyone and especially to our staff. We do not tolerate any kind of hate. However, this was after we politely ask 3 grown men to eat [their] pizza [elsewhere] while we try to close and put away our tables. If anyone knows or recognizes these men please be careful and report them. We respect and love everyone however this is hard to grasp. We will not stand for it EVER and we hope justice will be served to these individuals."

Grayson says he has been overcome from the outpouring of kindness he's received since the incident, both locally and internationally.