For Russians, climate change is taking the ground beneath their feet 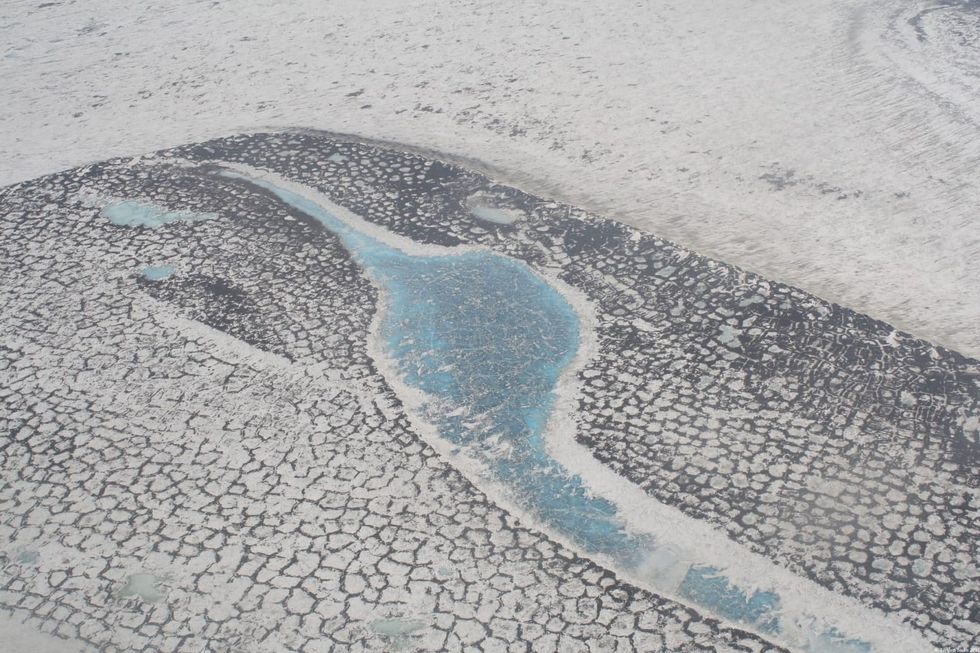 This handout photo shows an aerial view of the Russian tundra in the Lena Delta. When temperatures rise, people in Russia who live on permafrost sometimes feel the consequences drastically. Torsten Sachs/Alfred Wegener Institute/dpa

In some regions of Russia, the effects of climate change are more noticeable than elsewhere: With rising temperatures, the permafrost is slowly thawing. As a result, damage to houses, roads and other infrastructure such as gas pipelines is becoming more frequent.

When permafrost thaws, buildings are more likely to collapse – "a dangerous trend," according to engineer Ali Kerimov from a team of experts in the industrial city of Norilsk working to make life at the Arctic Ocean secure again.

In Norilsk, the world's northern-most city, houses are built on stilts, as in many places in permafrost regions.

"They reach 10 to 30 metres deep into the ground," says Kerimov, director of the Fundament Research and Production Company. This method prevents the buildings from collapsing during temperature fluctuations. Cracks on the buildings' outer walls are evidence that the ground is in motion.

However, the stilts are barely sufficient anymore, the 55-year-old says. Whenever temperatures rise, the ground sinks deeper - when the soil 3-to-5-metres deep thaws, it can sink up to 1 metre, he adds.

This is a serious problem in the world's largest country.

Almost two-thirds of the ground area in Russia is permanently frozen. A large amount of animal and plant remains that have not yet been decomposed by microbes are contained in the frost. But in many regions, temperatures are rising and the frost is thawing.

"Global warming can no longer be denied," says Mathias Ulrich, geographer at the University of Leipzig in Germany. "The Arctic is the epicentre of global warming. Nowhere else on this planet is it as pronounced as there," he says.

Permafrosts mainly exist in Alaska, Canada and in Siberia, from the Arctic Ocean to the Ural Mountains, and in the south to Mongolia.

Researchers fear that the thawing of permafrost could also release large amounts of greenhouse gases such as methane or carbon dioxide.

"This in turn would further increase the greenhouse effect," Ulrich estimates.

People living in the permafrost regions notice the consequences of climate change in their everyday life as buildings, streets and lanes collapse. In Norilsk, such damage is meticulously recorded.

Mayor Dmitry Karasev's list includes 240 houses that need to be renovated or are uninhabitable due to the damage. "We have to do everything to stabilize the buildings to prevent accidents," he says.

According to current studies, over 1,000 settlements and cities are built on Arctic permafrost and inhabited by a total of some 5 million people, says Ulrich. "Projections show that in 30 years, 42 per cent of these settlements will be permafrost-free," according to Ulrich.

In Russia alone, 20 per cent of all buildings and 19 per cent of infrastructure could be affected by global warming's consequences.

The Environment Ministry estimates that by 2050, the cost of damages related to thawing permafrost could reach up to 67 billion dollars.

An example from spring 2020 illustrates the possible threat of pollution: Close to Norilsk, more than 21,000 litres of diesel fuel had leaked from a damaged tank because its support had sunk into the thawing ground.

To prevent catastrophes like this one or the collapsing of buildings, engineer Kerimov advocates regular monitoring of frozen ground.

"The monitoring system should be designed to predict changes in soil temperature and possible reduced bearing capacity of the foundation five to 10 years in advance," he says. This would leave enough time for finding and implementing "adequate measures" for more security.

Some foundations and permafrosts are being cooled artificially with so-called thermostabilizers, to prevent houses built on thawing permafrost from collapsing.

The permafrost expert and his team are also researching materials for foundations that are better able to withstand temperature changes.

In the future, hardly any new buildings will be built without such technologies. Norilsk has already stopped building high-rise buildings, according to Karasev; since 2002, the city has only been constructing smaller buildings on the thawing ground.