How the Afghanistan debacle is exploding right-wing heads 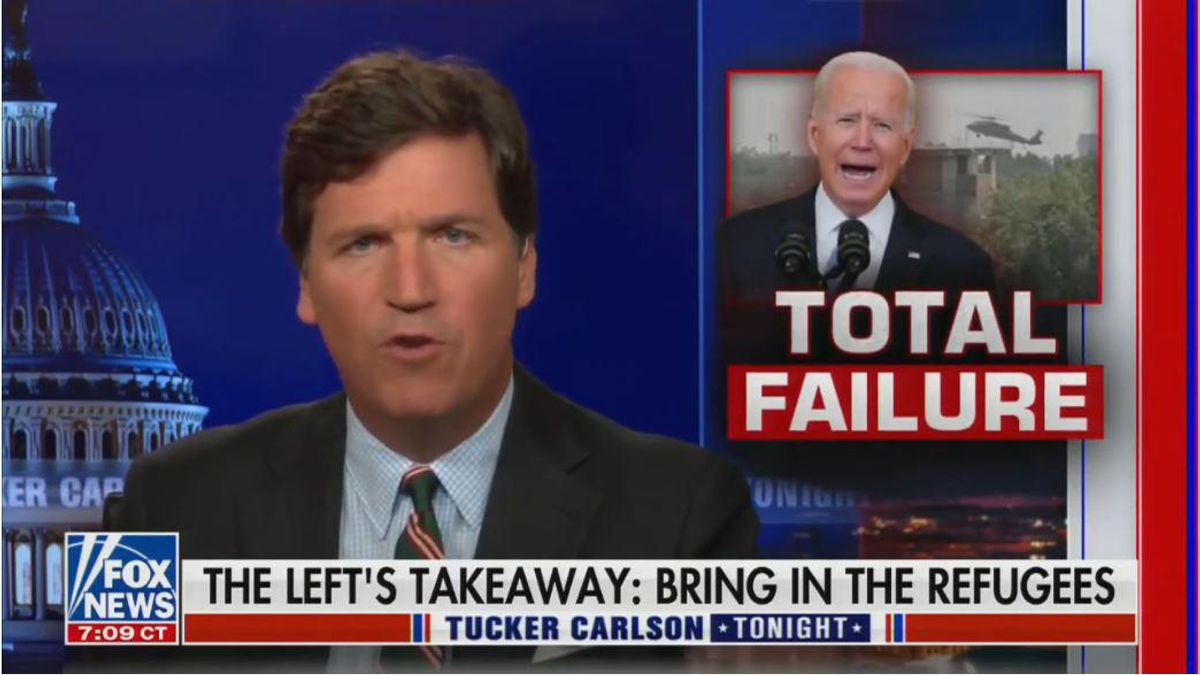 For a few moments, I wondered if the Republican opposition, which is so reveling in the discomfort that Joe Biden's decision-making on Afghanistan has evoked, actually was expressing concern about the fate of myriad Afghans who helped the American and coalition cause.

Naturally, a certain hypocrisy in messaging from the Right took only another day to kick in.

The heart-breaking images of those who helped repel terrorism in Afghanistan for 20 years realistically reflect the near impossibility of removing the anti-terrorists in large numbers.

'We will see many refugees from Afghanistan resettle in our country, and over the next decade, that number may swell to the millions. So first we invade, and then we are invaded.' Tucker Carlson, Fox News

Nevertheless, the moral thing for America to do, insist veterans, diplomats, pundits, women and non-governmental humanitarian groups, is for massive airlifts to rescue upward of 90,000 now-refugees at risk for what looks to be certain death, rape, forced marriages and a return to an anti-human rights campaign of immediate, if misinterpreted, Islamic justice. We heard leading Republicans bang away at Biden's failures to make the Taliban takeover a calm affair and to have accelerated visa rescues for Afghans who want out five months ago or more.

The case is a strong one to aid those who helped us, to stand by our word and to uphold American humanitarian values.

It was heartening to hear that even conservative hardliners, including those in Congress, were putting the fate of so many individual Afghans on a pedestal for us to rescue. Even the likes of Sen. Tom Cotton (R-Ark.), who hates everything Biden does, told Afghans to call his office for individual help, as if they could do so.

Circumstances and Afghan demands not to do so aside, Biden alone owns the disastrous picture was the message.

It was overlooked that predecessor Donald Trump had made the no-conditions announcement of withdrawal; that the built-up Afghan army just refused to fight; and that the Afghan president fled the country altogether.

But wait. Doesn't doing the right thing here mean moving and taking in all those Afghans and families?

Aren't they immigrants seeking refuge from persecution just like the hordes that conservatives insist are massing at our Southern border? Aren't they "non-white," and from a country with under 2% Covid vaccination rate? Where would they all go, anyway?

As it turns out, of course, taking out that many Afghans is proving difficult for anyone not already among those swarming the Kabul airport. Women are being stopped, and Taliban patrols are reported to be seeking out Afghans on U.S. or allied database lists.

From all reports, the situation remains chaotic.

The needed forms are complicated and all in English, of course, and there is no one left in Kabul to process would-be immigrants.

However the practical side of this works out – it will take many days to know – some people are getting out to go to third countries to await further processing. But most can't leave, despite some Taliban promises to allow exits.

There is a lot of loose talk about why America is insisting on so much paperwork in the middle of chaos – as if the same thing is not evident and true throughout the immigration system and, in particular, at the Southern border.

We've heard nearly daily from Republicans from Trump to Republican governors about the failures of strong immigration barriers, if not outright walls, to stop immigrants from invading the United States, legally or not, with lots of emphasis on the Biden-authorized import of vaccine-less migrants carrying Covid (most who cross and in Border Patrol custody actually are quarantined for two weeks), crime, drugs and more. What is needed, they say, are total bans, years' worth of wait and processing and review, and deportations.

So now, it is OK for other specific war-related Afghans to simply show up and be whisked away? How does the Right square this contradiction?

"It is becoming increasingly clear that Biden & his radical deputies will use their catastrophic debacle in Afghanistan as a pretext for doing to America what Angela Merkel did to Germany & Europe."

"If history is any guide, and it's always a guide, we will see many refugees from Afghanistan resettle in our country, and over the next decade, that number may swell to the millions. So first we invade, and then we are invaded."

"Is it really our responsibility to welcome thousands of refugees from Afghanistan?"

Indeed, there was one Proud Boys Telegram account cited by Vice's Ben Makuch:

"I think Islam is poisonous. But, these farmers and minimally trained men fought to take their nation back from [world governments]. They took back their national religion as law, and executed dissenters. Hard not to respect that."

You get the idea. To the Trump Right, saving refugees is good, but saving ourselves from immigrants is more important.

It is mostly disingenuous to draw conclusions in a situation this chaotic and fluid. But we do know that the Afghan meltdown is consequential for a variety of international concerns, American prestige is on the line, even with allies and with potential in-nation helpers in the next terror war zone.

We can communally worry that Afghanistan will return as a safe home for terrorist training, and the elimination of effective intelligence and diplomacy to monitor developments in that country.

There are open questions about whether the Taliban actually directs or controls its most militaristic rebels, and whether any word from a new government about safe passage out can be believed.

There are a ton of unresolved questions about American immigration policies as they apply to a rescue on this scale. Given Biden's forceful self-defense this week about his own decisions, it is unlikely that we will see any widespread changes in leadership of U.S. intelligence services.

The actions of the Chinese and Russians are under review to determine just how they will work with the Taliban. In Europe, Biden is coming under heavy criticism for seeming to abandon 10s of thousands to a brutal group.

There are domestic U.S. political fallouts to resolve from decision-making across multiple presidencies, but finally by Biden, based on faulty assumptions about Afghan resolve and failures to defend themselves when called upon.

Republicans won't let go of images of helicopters on the embassy roof and declarations of disaster that they were either silent about or in support of when the same words were uttered by Trump. No one is talking about deploying more American troops in Afghanistan for another 20 years.

As MSNBC host Nicolle Wallace noted, there is no stomach among Americans for more Afghan war, though there is serious distaste for the images of desperate Afghans holding onto the sides of military aircraft to escape the country.

"With both the Biden administration and the Taliban promising to offer protection, for millions of Afghans the future promised only more uncertainty. Despite assurances of safe passage, the Taliban are not only known to operate with brutality, but also have a dismal history of managing a vast nation largely dependent on foreign aid."