An Ohio high school is receiving some backlash after a student allegedly made a racist and sexist presentation, local news outlet Fox19 reports.

“The Franklin City School District is aware of a student presentation that was recently shared on social media and the internet. Regardless of the intent, the presentation includes some offensive slides that the District does not condone," the statement read. "Although state and federal privacy laws prohibit the District from discussing the specific actions we have taken with respect to the student and staff member involved, we want to assure the community that we have taken appropriate action to address the issue and prevent similar actions from occurring in the future. The District will have no further comment on this matter at this time.”

According to one anonymous parent who saw the presentation, one slide began with the question, “Was slavery okay” and proceeded to claim that "Black people are inferior and we should be treated like slaves.” The parent said another slide questioned women's right to vote.

IN OTHER NEWS: A 'racist Karen' slapped a Little Caesars worker – now she's been slapped with hate crime charges

The parent wants the student to face a harsher punishment. “He has the whole presentation about being misogynistic and racist... He should be expelled from the school,” she told Fox19.

An image shared on social media purportedly showed one of the controversial slides, which contained inflammatory racist statements: 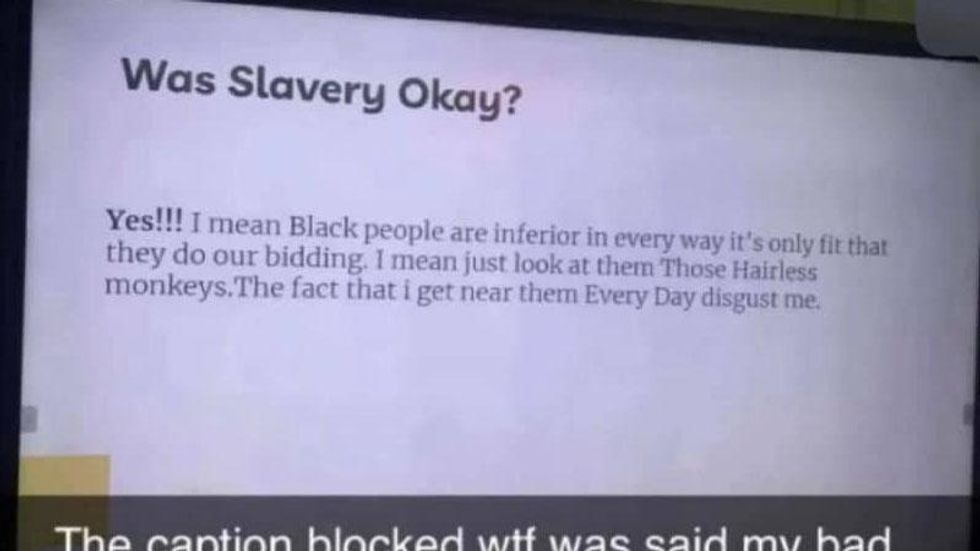 According to WLWT, the presentation was about animal cruelty, "comparing it to radical views like racism and preventing women from voting."

"Below each question were viewpoints intended to be obviously unacceptable. The presentation ended with an explainer as to why those viewpoints are unacceptable in our culture," the outlet reported.

On Facebook, the Warren County Democratic Party connected the incident to recent GOP legislation. "We haven't seen the slides, so we don't know the content, but this looks like it's teaching critical thinking. It's obvious Republicans can't stand critical thinking, since people might be able to make their own informed decisions instead of being brainwashed by them. This is what HB616 is all about."

HB616 would ban teaching about sexual orientation and gender identity from kindergarten through third grade in all public schools.