Gamma rays from a dwarf galaxy solve an astronomical puzzle

A glowing blob known as “the cocoon”, which appears to be inside one of the enormous gamma-ray emanations from the centre of our galaxy dubbed the “Fermi bubbles”, has puzzled astronomers since it was discovered in 2012.

In new research published in Nature Astronomy, we show the cocoon is caused by gamma rays emitted by fast-spinning extreme stars called “millisecond pulsars” located in the Sagittarius dwarf galaxy, which orbits the Milky Way. While our results clear up the mystery of the cocoon, they also cast a pall over attempts to search for dark matter in any gamma-ray glow it may emit.

Thankfully for life on Earth, our atmosphere blocks gamma rays. These are particles of light with energies more than a million times higher than the photons we detect with our eyes.

Because our ground-level view is obscured, scientists had no idea of the richness of the gamma-ray sky until instruments were lofted into space. But, starting with the serendipitous discoveries made by the Vela satellites (put into orbit in the 1960s to monitor the Nuclear Test Ban), more and more of this richness has been revealed.

The state-of-the-art gamma-ray instrument operating today is the Fermi Gamma Ray Space Telescope, a large NASA mission in orbit for more than a decade. Fermi’s ability to resolve fine detail and detect faint sources has uncovered a number of surprises about our Milky Way and the wider cosmos.

One of these surprises emerged in 2010, soon after Fermi’s launch: something in the Milky Way’s centre is blowing what look like a pair of giant, gamma-ray-emitting bubbles. These completely unanticipated “Fermi bubbles” cover fully 10% of the sky.

A prime suspect for the source of the bubbles is the Galaxy’s resident supermassive black hole. This behemoth, 4 million times more massive than the Sun, lurks in the galactic nucleus, the region from which the bubbles emanate.

Most galaxies host such giant black holes in their centers. In some, these black holes are actively gulping down matter. Thus fed, they simultaneously spew out giant, outflowing “jets” visible across the electromagnetic spectrum.

Thus a question researchers asked after the discovery of the bubbles: can we find a smoking gun tying them to our Galaxy’s supermassive black hole? Soon, tentative evidence did emerge: there was a hint, inside each bubble, of a thin gamma-ray jet pointing back towards the galactic centre.

With time and further data, this picture became muddied, however. While the jet-like feature in one of the bubbles was confirmed, the apparent jet in the other seemed to evaporate under scrutiny.

The bubbles looked strangely lopsided: one contained an elongated bright spot – the “cocoon” – with no counterpart in the other bubble.

The cocoon and where it comes from

Our recent work in Nature Astronomy is a deep examination of the nature of the “cocoon”. Remarkably, we found this structure has nothing to do with the Fermi bubbles or, indeed, the Galaxy’s supermassive black hole.

Rather, we found the cocoon is actually something else entirely: gamma rays from the Sagittarius dwarf galaxy, which happens to be behind the southern bubble as seen from the position of Earth. 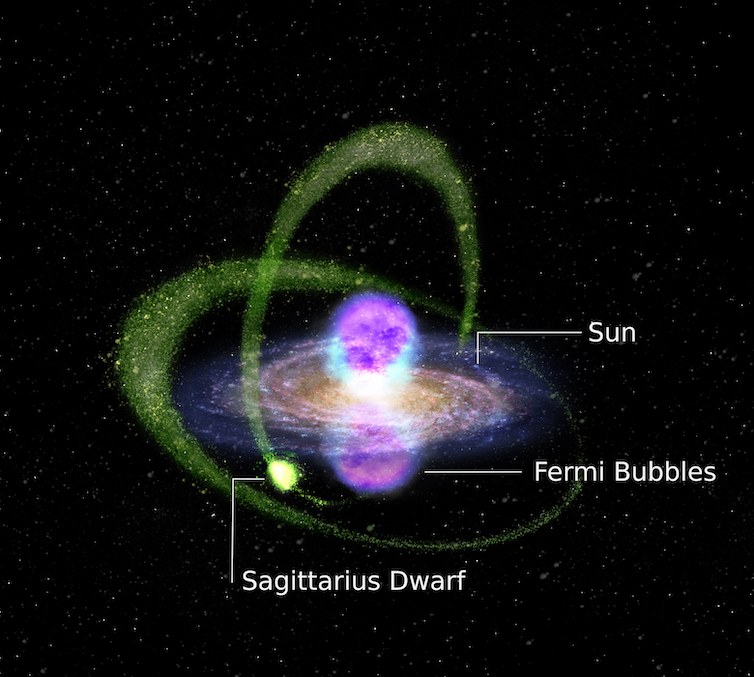 The Sagittarius dwarf, so called because its sky position is in the constellation of Sagittarius, is a “satellite” galaxy orbiting the Milky Way. It is the remnant of a much larger galaxy that the Milky Way’s strong gravitational field has literally ripped apart. Indeed, stars pulled out of the Sagittarius dwarf can be found in “tails” that wrap around the entire sky.

In the Milky Way, the main source of gamma rays is when high-energy particles, called cosmic rays, collide with the very tenuous gas between the stars.

However, this process cannot explain the gamma rays emitted from the Sagittarius dwarf. It long ago lost its gas to the same gravitational harassment that pulled away so many of its stars.

So where do the gamma rays come from?

We considered several possibilities, including the exciting prospect they are a signature of dark matter, the invisible substance known only by its gravitational effects which astronomers believe makes up much of the universe. Unfortunately, the shape of the cocoon closely matches the distribution of visible stars, which rules out dark matter as the origin.

One way or another, the stars were responsible for the gamma rays. And yet: the stars of the Sagittarius dwarf are old and quiescent. What type of source amongst such a population produces gamma rays?

We are satisfied there is only one possibility: rapidly spinning objects called “millisecond pulsars”. These are the remnants of particular stars, significantly more massive than the Sun, that are also closely orbiting another star.

Under just the right circumstances, such binary systems produce a neutron star – an object about as heavy as the Sun but only about 20km across – that rotates hundreds of times per second.

Because of their rapid rotation and strong magnetic field, these neutron stars act as natural particle accelerators: they launch particles at extremely high energy into space.

These particles then emit gamma rays. Millisecond pulsars in the Sagittarius dwarf were the ultimate source of the mysterious cocoon, we found.

The hunt for dark matter

Our findings shed new light – pun intended – on millisecond pulsars as sources of gamma rays in other old stellar systems.

At the same time, they also cast a pall over efforts to find evidence for dark matter via observations of other satellite galaxies of the Milky Way; unfortunately, there is a stronger “background” of gamma rays from millisecond pulsars in these systems than previously realized.

Thus, any signal they produce might not be unambiguously interpreted as due to dark matter.

The hunt for dark matter signals goes on.