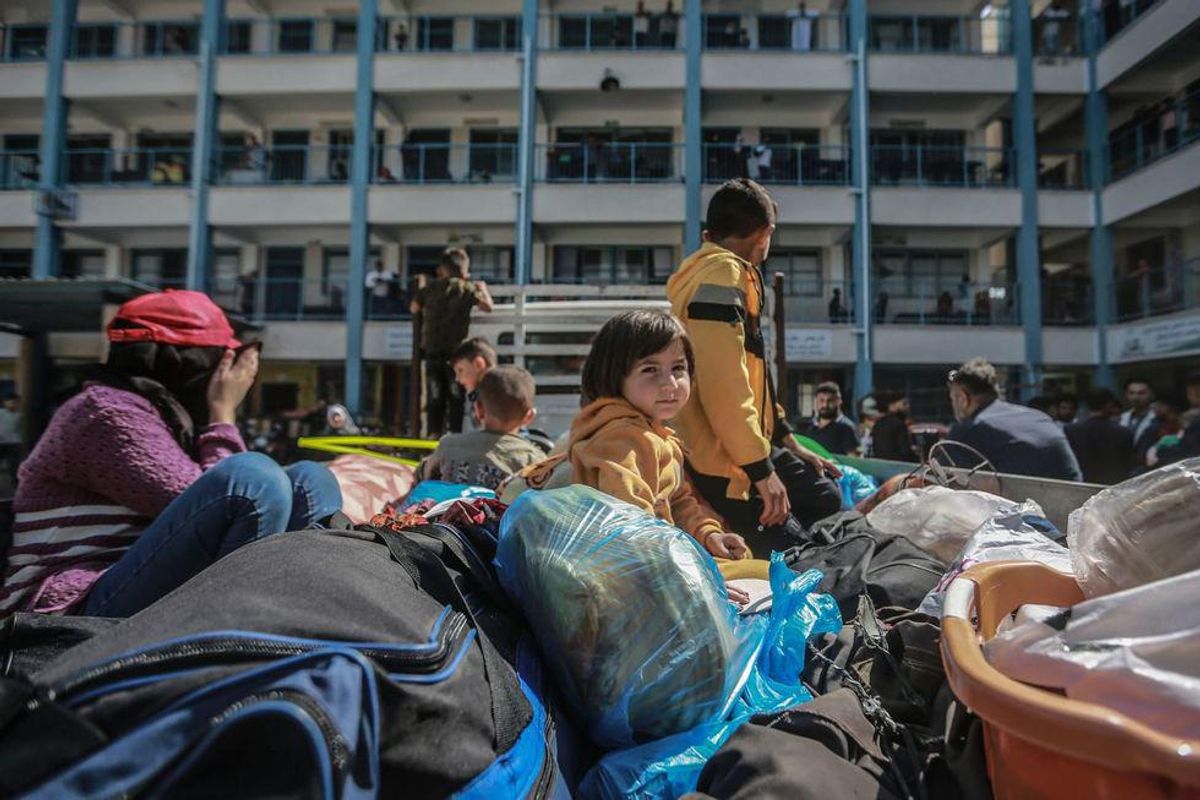 Week in Pictures - Gaza Strip - Palestinians sit on their belongings in a UN school in Gaza City after fleeing from their homes in the Shejaiya neighbourhood and the city of Beit Lahia during Israeli airstrikes, amid the escalating flare-up of Israeli-Palestinian violence. - Mohammed Talatene/dpa

As healthcare workers in Gaza cope with the aftermath of the Israel Defense Forces' 11-day bombardment campaign, health officials on Saturday expressed fear that the effects of thousands of Palestinians crowding into shelters for safety from the airstrikes was becoming apparent as coronavirus cases appeared to surge in the besieged territory.

More than 1,900 people were injured in the IDF attacks, with people of all ages crowding hospitals and forcing officials to evacuate Covid-19 patients from critical care wards to make room.

"Despite the preparedness of UNRWA staff and UNRWA facilities in providing shelter in conflict, UNRWA now also contends with the unprecedented circumstance of the Covid-19 pandemic which requires additional measures to be taken."
—UNRWA

According to the Washington Post, about 70,000 people in Gaza sought refuge in schools, underground shelters, community centers, and other sites as residential areas were bombed and homes were destroyed. Thousands of people also crowded into relatives' homes.

The loss of the testing lab will leave asymptomatic Covid-19 cases undetected, health officials told the Post, in a place where less than 2% of the population has been vaccinated—compared with more than 56% of Israelis.

On Friday, al-Shifa hospital was able to test 50 people and found that 40 tested positive for the coronavirus, leading to critical care beds being filled to capacity.

Palestinian-American writer and political analyst Yousef Munayyer tweeted last week that a public health "nightmare" would likely take hold in Gaza once the bombing stopped, as it did early Friday following a ceasefire.

In addition to the crowding of hospitals and shelters where Covid-19 has apparently been able to spread rapidly, water supplies have been cut by 40% in Gaza, leading to sanitation concerns.

The United Nations Relief and Works Agency for Palestinian Refugees (UNRWA) on Friday called for $38 million in relief funding for food, water, health needs, and sanitation and hygiene.

"Despite the preparedness of UNRWA staff and UNRWA facilities in providing shelter in conflict, UNRWA now also contends with the unprecedented circumstance of the Covid-19 pandemic which requires additional measures to be taken," said the agency.

The International Committee of the Red Cross told the Post it was sending medical supplies including monitors, defibrillators, and a mechanical ventilator to Gaza, while the COVAX vaccine program planned to deliver a shipment of coronavirus vaccine doses to the territory.

The Israeli blockade, however, will make it difficult for the equipment and doses to reach overwhelmed hospitals quickly.

UNRWA said the surge in Covid-19 cases will only worsen Gaza's already limited ability to recover from the latest Israeli bombardment.

"Every time there is a conflict in Gaza, intense air bombardment pulverises basic infrastructure, homes, hospitals, and factories," Tamara al-Rifai, a spokesperson for UNRWA, said in a statement. "It then takes UNRWA and aid agencies several years to rehabilitate their premises and many homes and livelihoods of Gazans are never rebuilt."