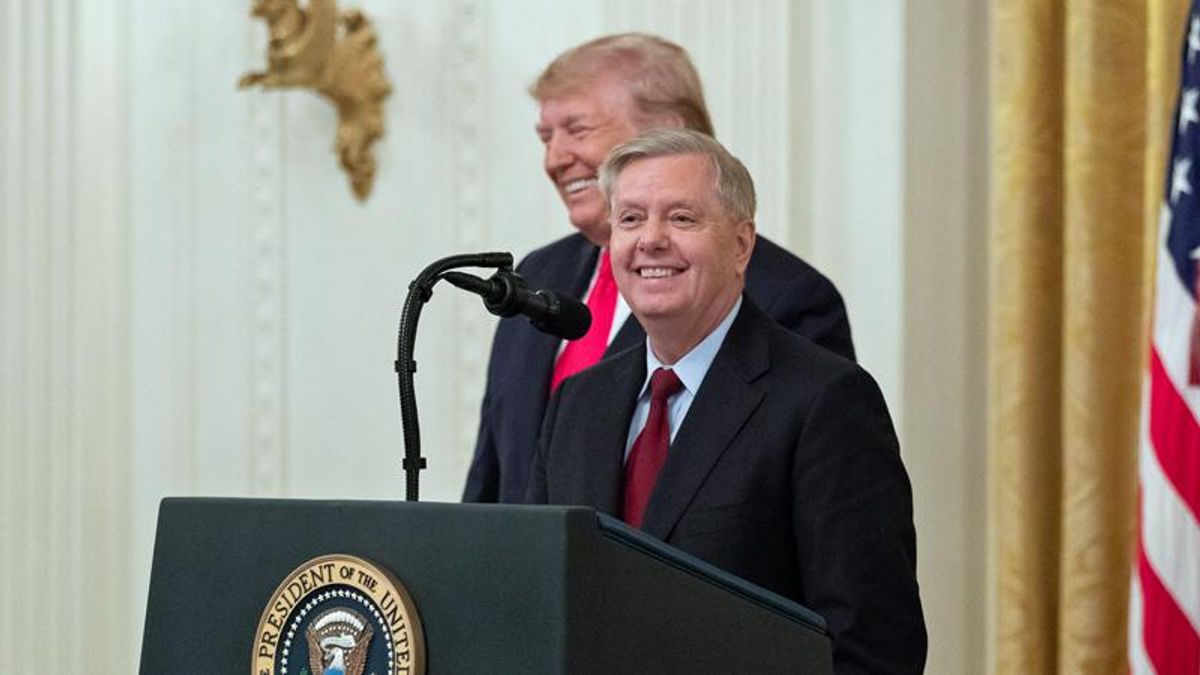 I believe all the reports that say Minority Leader Mitch McConnell, R-Ky., loathes former president Donald Trump with every fiber of his being. Apparently, he hasn't spoken to him since the election and has made it clear to everyone who knows him that he would love to see Trump just retire to Mar-a-Lago never to be heard from again. He's anything but a Trump true believer.

But Mitch McConnell believes in power. As he cast about trying to get a sense of where Republicans are in the wake of Trump's disastrous performance since the election and the incitement of a violent insurrection on January 6th, he floated trial balloons about supporting impeachment and made some critical speeches. But he never had any intention of allowing Donald Trump to be convicted in a Senate trial, even if it were possible. How do we know this? As The Atlantic's James Fallows tweeted:

On Tuesday, when Senator Rand Paul, R-Ky, called for a vote on the question of whether impeaching a president after he was out of office was constitutional, Mitch McConnell and with 44 other Republicans signaled that they believe it is not. That's why he delayed the trial. A year ago, Republicans argued against Trump's first impeachment because the country was too close to an election.

Similarly, McConnell's lugubrious paean to Senatorial comity as he held the Senate hostage demanding that Democrats agree not to eliminate the filibuster is a monument to shameless hypocrisy, as Fallows also demonstrates:

McConnell himself eliminated the filibuster for judicial confirmations and had no problem with it for regular legislation because they didn't really legislate during Trump's term. Republicans rammed through their massive corporate tax giveaway and a failed Obamacare repeal through the Senate's budget reconciliation process because budget bills can't be filibustered. So all McConnell did was kill legislation that passed the House and confirm federal judges on an assembly line. Republicans don't really have a legislative agenda anymore. They are a purely obstructionist congressional party that depends entirely on judicial power to roll back existing programs and executive power to enact policy.

In any case, it's clear that we don't have to hold our breath wondering if the newly enlightened Mitch McConnell will join hands with the sane people to save the country from Trump's radical mob. The idea was always laughable. What's happening instead is a concerted effort on the part of the entire GOP establishment to cleanse Donald Trump of any responsibility for what he did so that he might emerge once again as the hero they've all been waiting for. They simply cannot quit him.

"Impeachment is for removal from office, and the accused here has already left office — a trial would drag our great country down into the gutter of rancor and vitriol, the likes of which has never been seen in our nation's history," the Kentucky Republican thundered.

I'm pretty sure we saw the likes of that on January 6th when the greatest sore loser in history provoked an angry mob into storming the Capitol, chanting "hang Mike Pence" and "Nancy Pelosi, we're coming for you!" Frankly, this country was dragged into the gutter of rancor and vitriol the day Donald Trump was elected president in 2016.

Florida Senator Marco Rubio, who has apparently taken a bet from someone that he can be even more sycophantic toward Trump than South Carolina Republican Sen. Lindsey Graham, characterized holding Trump accountable for siccing an angry mob on Congress to stop the certification of the electoral college as simply a "show" trial:

Again, if you're talking about shows and vengeance, it's pretty rich to try to misdirect people into believing it's the impeachment rather than the events of January 6th in which Donald Trump staged a huge rally in D.C. on the day Congress was scheduled to certify Joe Biden's win and told them he was going to lead them to the Capitol to stop the count.

Ted Cruz, one of the insurrectionist senators who backed Trump's baseless claims of election irregularities in swing states Trump lost, unctuously declared that we now need to move on:

This from the man who flogged the Benghazi pseudo-scandal for years.

And then we have former South Carolina Governor Nikki Haley making an earnest appeal to leave poor Trump alone:

"The actions of the president post-Election Day were not great. What happened on January 6 was not great. Does he deserve to be impeached, absolutely not ... I don't even think there's a basis for impeachment. Now they're going to turn around and bring about impeachment yet they say they're for unity. I mean at some point give the man a break. I mean move on...

This is deja vu all over again. Every time Trump did something outrageously beyond the pale, there would be a flurry of hand wringing and pearl-clutching by Republicans followed almost immediately by excuses and deflecting blame once they got some blowback from the right-wing media and Trump's supporters. The pattern was set back in the 2016 campaign when news of the Access Hollywood tape was published and half the GOP declared it was the last straw, claiming they could never look their children in the eye again if they supported such a crude, indecent man. Some said he should step aside for Mike Pence or even declared their intention to vote for Hillary Clinton. Mitch McConnell said that he strongly believed "Trump needs to apologize directly to women and girls everywhere, and take full responsibility for the utter lack of respect for women shown in his comments on that tape."

He did not. And before long, the GOP response was more along the lines of Dr. Ben Carson's, who claimed the Democrats had probably had the tapes for some time and had dropped them to distract attention from Wikileaks emails that supposedly said Hillary Clinton wanted "open borders." (Those Wikileaks emails were actually released immediately after the Access Hollywood tape came out.)

As we know, all but a small handful of Republicans fell in lockstep with him shortly thereafter until the next time he did something abhorrent. A few apostates rebelled and ended up being chased out of politics for it but before long, most of them stopped even pretending to have any integrity or morals and the few that still felt compelled to say something when he went off the rails usually just made a half-hearted gesture and then went along.

And as usual, it appears this time that for most of the senators, even those who proclaimed their dismay at the violent mob that defiled the Capitol, their vote to fulfill their oath and certify the election took all the energy they could muster to protect our democracy. On Tuesday, only five Republicans managed to reject Rand Paul's fatuous claim that the impeachment is unconstitutional, the vast majority signaling once again that Donald Trump can do no wrong.

In an interview with CBS correspondent Major Garrett for "The Takeout" podcast, presidential historian Jon Meacham lamented the accelerated decline of the Republican Party following the one-term presidency of Donald Trump and wondered if the party will ever return to its principles.

With the GOP undergoing an internal civil war centering on allegiance to Trump that looks to be leading to the ouster of Rep. Liz Cheney (R-WY) from a leadership position, Meacham said the loudest voices in the Republican Party have become untethered from reality.

Noting that the Republican Party "has descended into fantasy, conspiracy and falsehoods," Meacham claimed the GOP was poised to lose touch by focusing on hot-button cultural issues and that Trump showed them the way.

"There was a lot of gasoline on the garage floor of the Republican Party, and Trump was a match," Meacham explained. "And that gasoline, I believe, is partly spilled partly because of almost 90 years of a kind of growing disenchantment with the way Republican presidents actually delivered for their conservative base."

The historian focused on the Jan 6th insurrection at the U.S. Capitol and marveled at Republican officeholders who have dismissed it as old news when not questioning how bad it really was.

"We came as close to losing the country as we know it on January 6 as we have since the Civil War. And I say that with no hyperbole," he elaborated while noting one capitol rioter was able to flaunt the Confederate flag inside the U.S. Capitol and pointing out, "The Confederates didn't even get into the Capitol during the Civil War, but they did three months ago."

The historian also warned that race relations in the country appear to be getting worse, telling the CBS host, "We have not seen the last of the White reaction and backlash to a changing demographic and country."

'Crackdown on democracy': Republican lawmakers across the country are trying to overrule voters