Republicans will undermine democracy for a decade if Democrats don't eliminate the filibuster: expert 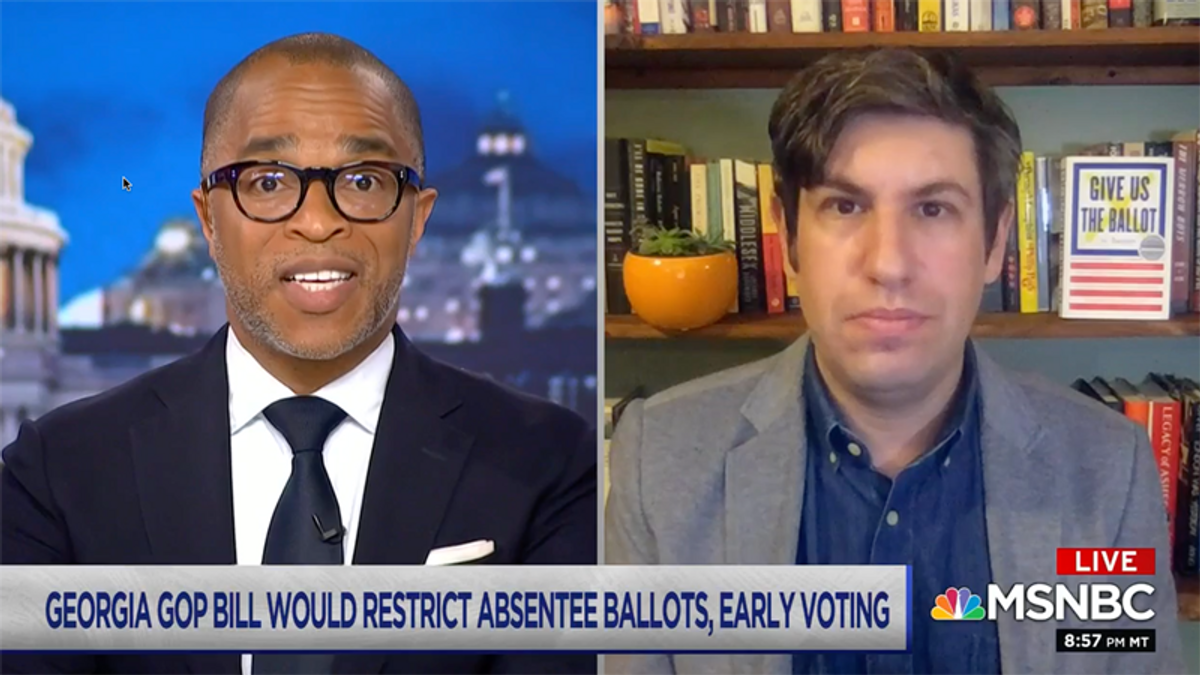 Republicans will undermine democracy for a decade unless Senate Democrats eliminate the filibuster, a voting rights expert explained on MSNBC on Friday Night.

"It's well known, by now, that after losing elections, republicans don't try to appeal to a broader electorate. instead, they try to stop people, particularly people of color, from voting altogether," MSNBC anchor Jonathan Capehart said.

"And after their 2020 losses, the GOP kicked those efforts into overdrive," he continued. "This year, 165 new voting restrictions have been introduced in 33 states. Some of those restrictions are coming out of Georgia, where state Republicans introduced a bill that would tighten the timeline for requesting and returning absentee ballots, and limit access to ballot-drop boxes. The GOP bill would also eliminate -- get this -- early voting on Sundays, when black churches traditionally hold 'Souls to the Polls' voter turnout events."

For analysis, Capehart interviewed Mother Jones magazine reporter Ari Berman, the author of the 2016 book, Give Us the Ballot: The Modern Struggle for Voting Rights in America.

Capehart noted a quote Aunna Dennis, the executive director of Common Cause Georgia, that appeared in a new piece Berman wrote titled, "Georgia Republicans Are Doubling Down on Racist Voter Suppression."

"This bill is Jim Crow with a suit and tie," Dennis charged.

"That's absolutely right, Jonathan, because you look at just the provision eliminating Sunday voting, that, as you mentioned, is when black churches do 'Souls to the Polls' voter-mobilization drives," Berman explained. "Black voters in Georgia are about 30% of the electorate but they were 37% of those people that voted on Sunday. And this is a real tell here because this has nothing to do with election integrity -- giving people more time to vote, on the weekends, simply makes it more convenient and the fact that Georgia republicans are trying to get rid of a method of voting that's extremely convenient for all voters, but particularly, used by black voters, shows this has nothing to do with election integrity, it has everything to do with voter suppression."

"And Georgia Republicans and Republicans elsewhere are weaponizing Trump's 'Big Lie' now to try to make it harder for Democratic constituencies to vote," he continued.

Berman said it was imperative for Senate Democrats to get rid of the filibuster to pass legislation protecting voting rights.

"More than likely, the only way they are going to pass the John Lewis Voting Rights Act and the For the People Act is if they get rid of the filibuster.," he explained. "And Democrats have a choice here: they can do nothing and keep the filibuster and allow Republicans to undermine democracy for the next decade or they can get rid of the filibuster, pass sweeping democracy reforms and block all these anti-democratic methods. So the choice is really, really clear here in terms of the stakes for democracy right now."