Environmentalists and Florida residents voiced concern and outrage Monday as state government officials and the biotechnology giant Oxitec announced plans to move ahead this week with a pilot project that involves releasing up to a billion genetically engineered mosquitoes in Monroe County over a two-year period.

"EPA has set the lowest possible bar for approving genetically engineered insects and has opened Pandora's Box for future experiments that will slide through with little investigation."
—Barry Wray, Florida Keys Environmental Coalition

Presented by local authorities as an effort to control the population of Aedes aegypti—a mosquito species that can carry both the dengue and yellow fever virus—critics warn that the effort's supposed benefits and its potential negative consequences have not been sufficiently studied.

Responding to news that the first boxes of GE mosquitos are set to be placed in six locations in Monroe County this week, Friends of the Earth noted in a press release that "scientists have raised concerns that GE mosquitoes could create hybrid wild mosquitoes which could worsen the spread of mosquito-borne diseases and could be more resistant to insecticides than the original wild mosquitoes."

"This is a dark moment in history," said Perls. "The release of genetically engineered mosquitoes puts Floridians, the environment, and endangered species at risk in the midst of a pandemic. This release is about maximizing Oxitec's profits, not about the pressing need to address mosquito-borne diseases."

The Florida Keys Mosquito Control District and Oxitec said late last week that "less than 12,000 mosquitoes are expected to emerge each week" in Monroe Country over a duration of around three months, the initial phase of the experiment.

The stated goal of the project is for Oxitec's genetically altered, non-biting male mosquitos to mate with the local biting female population, producing female offspring that die in the larval stage before they can spread disease.

As the Miami Herald explained earlier this year: "A 'death mechanism' designed into mosquitoes is meant to ensure no viable female offspring will result from the mating, according to Oxitec. The male offspring will pass on the 'self-limiting gene' to half of their offspring, said company spokesman Ross Bethell."

While Oxitec's CEO claims "strong public support" from Florida Keys communities, the project has sparked protests and pushback from local residents since the proposal was first floated.

"My family's bodies, blood, and private property are being used in this trial without human safety studies or my consent," Mara Daly, a resident and local business owner in Key Largo, Florida, said in a statement Monday.

Barry Wray, executive director of the Florida Keys Environmental Coalition, added that the "EPA has set the lowest possible bar for approving genetically engineered insects and has opened Pandora's Box for future experiments that will slide through with little investigation."

"Everyone should be writing the White House to stop this release until there are regulations and standards that truly protect us," Wray said.

SmartNews Science
Report typos and corrections to: corrections@rawstory.com.
Like this article ? Text `Support` to 50123 to donate.
READ COMMENTS - JOIN THE DISCUSSION

The world’s largest organism is slowly being eaten by deer

In the Wasatch Mountains of the western US on the slopes above a spring-fed lake, there dwells a single giant organism that provides an entire ecosystem on which plants and animals have relied for thousands of years. Found in my home state of Utah, “Pando" is a 106-acre stand of quaking aspen clones.

Although it looks like a woodland of individual trees with striking white bark and small leaves that flutter in the slightest breeze, Pando (Latin for “I spread") is actually 47,000 genetically identical stems that arise from an interconnected root network. This single genetic individual weighs around 6,000 tonnes. By mass, it is the largest single organism on Earth.

Aspen trees do tend to form clonal stands elsewhere, but what makes Pando interesting is its enormous size. Most clonal aspen stands in North America are much smaller, with those in western US averaging just 3 acres.

Aerial outline of Pando, with Fish Lake in the foreground.

Pando has been around for thousands of years, potentially up to 14,000 years, despite most stems only living for about 130 years. Its longevity and remoteness mean a whole ecosystem of 68 plant species and many animals have evolved and been supported under its shade. This entire ecosystem relies on the aspen remaining healthy and upright. But, although Pando is protected by the US National Forest Service and is not in danger of being cut down, it is in danger of disappearing due to several other factors.

Deer are eating the youngest 'trees'

Overgrazing by deer and elk is one of the biggest worries. Wolves and cougars once kept their numbers in check, but herds are now much larger because of the loss of these predators. Deer and elk also tend to congregate in Pando as the protection the woodland receives means they are not in danger of being hunted there. 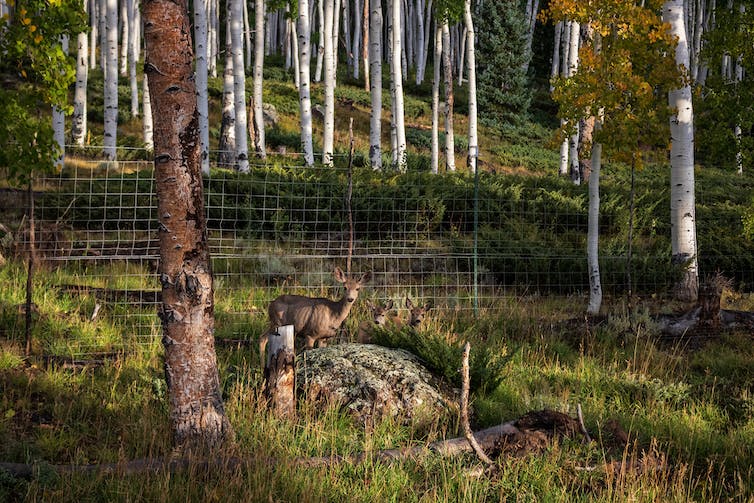 As older trees die or fall down, light reaches the woodland floor which stimulates new clonal stems to start growing, but when these animals eat the tops off newly forming stems, they die. This means in large portions of Pando there is little new growth. The exception is one area that was fenced off a few decades ago to remove dying trees. This fenced-off area has excluded elk and deer and has seen successful regeneration of new clonal stems, with dense growth referred to as the “bamboo garden".

Older stems in Pando are also being affected by at least three diseases: sooty bark canker, leaf spot and conk fungal disease. While plant diseases have developed and thrived in aspen stands for millennia, it is unknown what the long-term effect on the ecosystem may be, given that there is a lack of new growth and an ever-growing list of other pressures on the clonal giant.

The fastest-growing threat is that of climate change. Pando arose after the last ice age had passed and has dealt with a largely stable climate ever since. To be sure, it inhabits an alpine region surrounded by desert, meaning it is no stranger to warm temperatures or drought. But climate change threatens the size and lifespan of the tree, as well as the whole ecosystem it hosts.

Although no scientific studies have focused specifically on Pando, aspen stands have been struggling with climate change-related pressures, such as reduced water supply and warmer weather earlier in the year, making it harder for trees to form new leaves, which have led to declines in coverage. With more competition for ever-dwindling water resources (the nearby Fish Lake is just out of reach of the tree's root system), temperatures expected to continue soaring to record highs in summer, and the threat of more intense wildfires, Pando will certainly struggle to adjust to these fast-changing conditions while maintaining its size.

Yet Pando is resilient and has already survived rapid environmental changes, especially when European settlers began inhabiting the area in the 19th century or after the rise of 20th-century recreational activities. It has dealt with disease, wildfire, and grazing before and remains the world's largest scientifically documented organism. 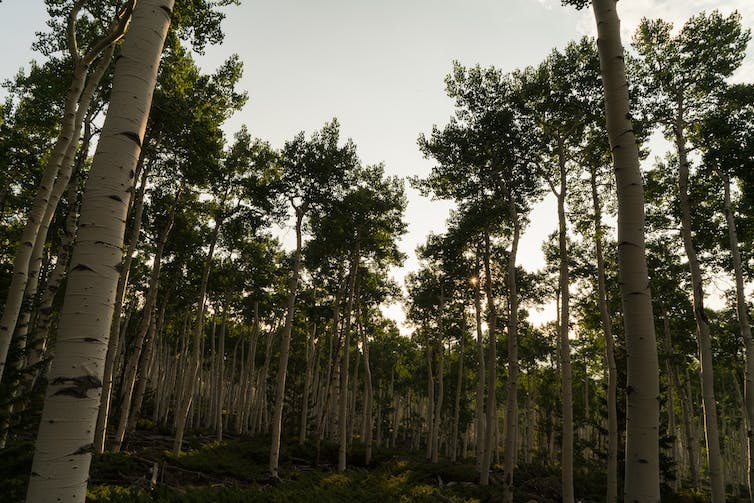 Despite every cause for concern, there is hope as scientists are helping us unlock the secrets to Pando's resilience, while conservation groups and the US forest service are working to protect this tree and its associated ecosystem. And a new group called the Friends of Pando aims to make the tree accessible to virtually everyone through 360 video recordings.

Last summer, when I was visiting my family in Utah, I took the chance to visit Pando. I spent two amazing days walking under towering mature stems swaying and “quaking" in the gentle breeze, between the thick new growth in the “bamboo garden", and even into charming meadows that puncture portions of the otherwise-enclosed centre. I marvelled at the wildflowers and other plants thriving under the dappled shade canopy, and I was able to take delight in spotting pollinating insects, birds, fox, beaver and deer, all using some part of the ecosystem created by Pando.

It's these moments that remind us that we have plants, animals and ecosystems worth protecting. In Pando, we get the rare chance to protect all three.