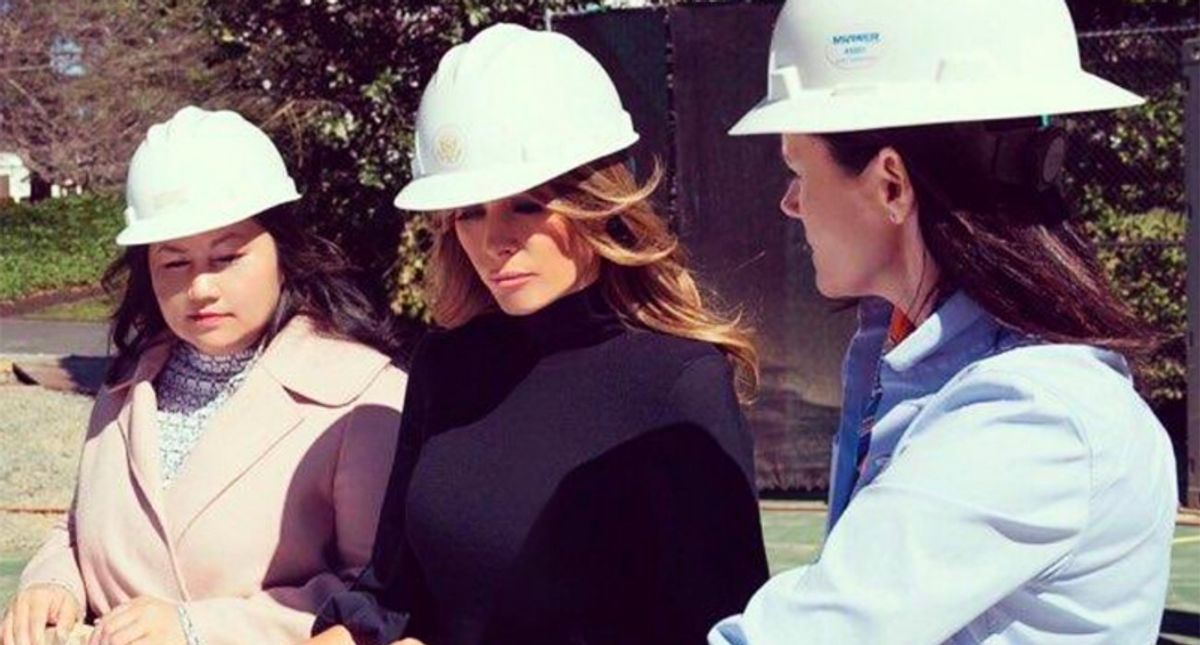 As he explained it, Trump wanted a shot of him and Melania Trump walking through the colonnade to the Rose Garden during the Republican National Convention. That proved to be impossible because Kennedy's crab apple trees blocked the view from the cameras. So, they "yanked" them out and all of the vegetation and put in a path. Later, the White House claimed that there was an "irrigation" issue.

"And it was beautiful and doesn't look like downtown Washington, D.C. that was all taken away," he said. "This whole place was transformed. essentially for a camera shot. They claimed it was, you know, to improve irrigation for some other reason. The result is here's something that's not the most important thing the Bidens have to do but I sure do hope they will at the earliest convenient opportunity transform the rose garden into the way it's supposed to look and has since 1962. With all that history."

He and Nicolle Wallace talked about the garden as a place where presidents and their staff could step outside for a breath of fresh air during long and tedious days.

MSNBC host Brian Williams noted that during the pandemic, former first lady Melania Trump supervised the construction of the pavilion for the tennis courts.

"Brian, you're provoking me," Beschloss half-joked. "Since you have done so, I am happy to respond. In March of 2020, we all remember, tragically, it was the first month that the pandemic really accelerated. Everyone observed it in their own way. This is how the Trumps and the first lady, Mrs. Trump, observed it. And that was by overseeing the building of what they call a tennis pavilion. There's a very nice tennis court that Barack Obama used to play basketball on and there are some people who suspect that the Trumps were very eager in their eagerness to erase almost any trace of the Obamas, to convert this as quickly as possible so that it did not look the way it did when the Obamas were there."

He explained that there were photos of Mrs. Trump in a hard hat like she was working "heavy construction of a skyscraper."

"This is a 1,200 square foot tennis pavilion, so-called. it looks quite like a mausoleum to some people," said Beschloss. "There are some people who have some association with the White House, not members of the Trump staff, who have joked, do they get privileges underneath a tennis pavilion at some point because it looks much more like a cemetery than it does a thing that should be next to a tennis building. And there are even some who have noticed that the tennis pavilion looks exactly like a structure right next to the house in Bel Air in Los Angeles that was used for Beverly Hillbillies."

This “pavilion” next to the house in Bel-Air used for filming of “The Beverly Hillbillies” TV show looks quite like… https://t.co/or5wP9YWXM
— Michael Beschloss (@Michael Beschloss)1610315981.0

There are many possibilities for the way that the White House can restore the garden but Dr. Jill Biden hasn't indicated if she intends to. One way to continue with the unity theme of the Biden Administration would be to ask all states and territories to contribute a rose bush or their own state flower that could help to re-establish the garden in the "People's House."

The destruction of the Rose Garden www.youtube.com