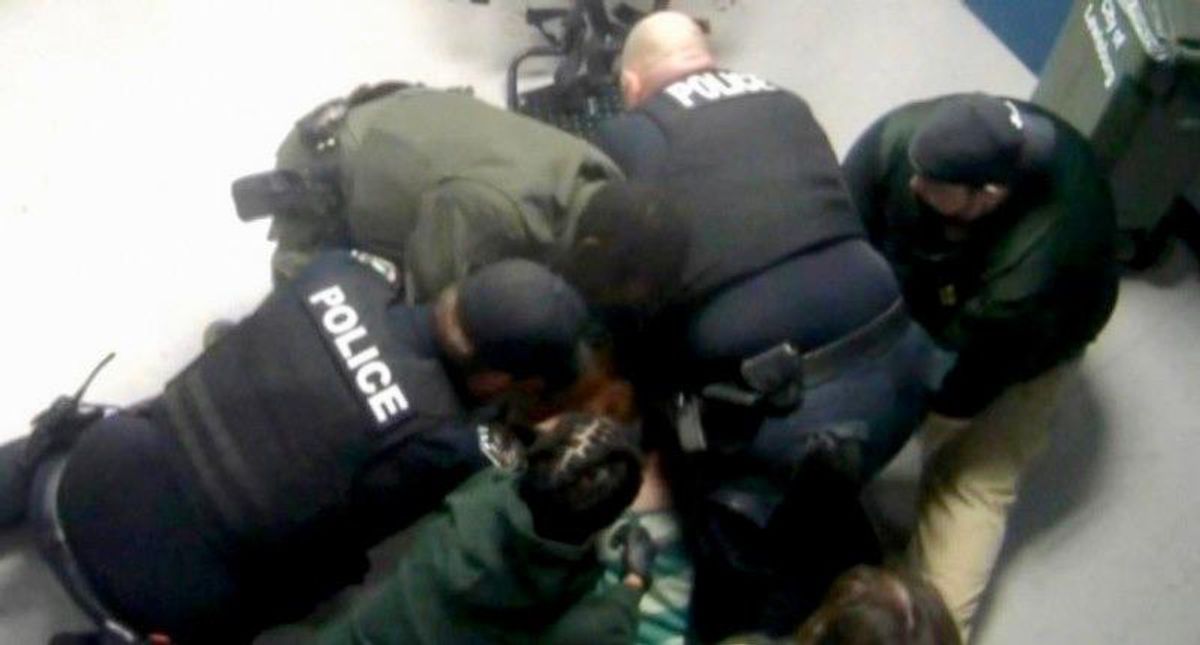 Justice advocates on Friday condemned officers at a Tennessee county jail for taunting a hogtied man moments before his death after a local news station published video of the incident.

"There's approximately a three-minute, 43-second period after officers have applied handcuffs where they keep the individual in the prone position, and that's not acceptable."
—Seth Stoughton,
use-of-force expert

William Jennette—a 48-year-old white father of five—died on May 6, 2020 at the Marshall County Jail in Lewisburg, Tennessee after a group of officers from multiple law enforcement agencies restrained him and kneeled on his back for several minutes while he screamed for help, WTVF reports.

Video obtained by the Nashville station shows Jennette—who was arrested for alleged public intoxication, indecent exposure, and resisting arrest—yelling, "Help, they're going to kill me!"

One officer is heard commanding Jennette to "stay down, you stupid son of a bitch."

The video also shows Jennette repeatedly pleading with officers that he could not breathe.

"You shouldn't be able to breathe, you stupid bastard," an officer identified in a lawsuit as Kendra Burton replies.

At least two officers in the video say that Jennette bit them.

At one point in the video an officer sounds a note of caution, telling his colleagues: "Easy, easy—remember asphyxiation, guys."

To which another officer responds, "That's why I'm not on his lungs."

"No, you ain't good," an officer replies.

An autopsy (pdf) performed by the Marshall County Medical Examiner's Office ruled Jennette's death a homicide, listing the cause as "acute combined drug intoxication"—he had methamphetamine in his system—with asphyxia as a "contributory cause of death."

Despite that finding, a grand jury decided not to indict any of the officers.

Sherrilyn Ifill of the NAACP Legal Defense and Education Fund called the video "an absolute nightmare," tweeting: "Grand jury refuses to indict any. That's how it usually happens."

Chris Vanderveen, director of reporting at KUSA in Denver, tweeted that this is the 121st prone police restraint death he has logged.

One of Jennette's daughters, Dominque Jennette, filed a lawsuit (pdf) this February against Marshall County, the city of Lewisburg, and several of the officers involved. The suit alleges the officers' "savage beating" and "suffocation" of Jennette caused his death, and constitute a "deprivation of civil rights" under the Fourteenth Amendment.

"That just breaks my heart because he was someone worth knowing," his daughter told WTVF. "That's just something that really sticks with me, how scared he must have been and how alone he must have felt."

Dominique Jennette said she believes the officers "should have been more aware."

"They should have been trained properly, and they weren't," she added.

Seth Stoughton, a law professor and former police officer, told WTVF that the video shows "the exact opposite of what generally accepted training has taught officers for the last 25 years."

"When the handcuffs came on, they should have rotated the guy to his side," asserted Stoughton. "There's approximately a three-minute, 43-second period after officers have applied handcuffs where they keep the individual in the prone position, and that's not acceptable."

The video's release came one day after the Associated Press published footage it obtained of Louisiana state troopers stunning, punching, kicking, choking, and dragging 49-year-old Ronald Greene, who died during a May 2019 arrest following a high-speed chase.