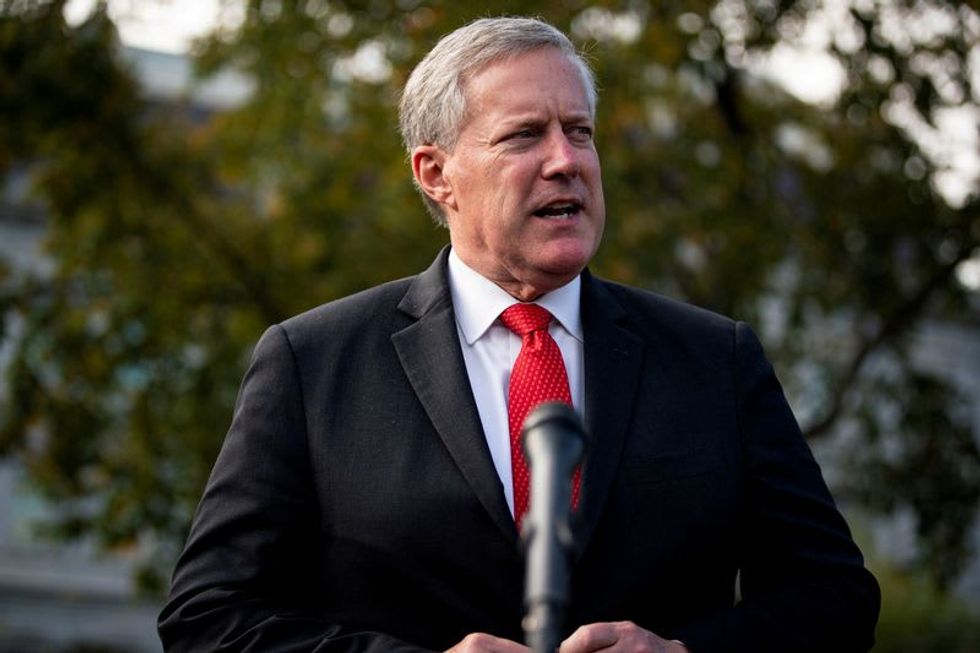 WASHINGTON (Reuters) - Donald Trump's former chief of staff, Mark Meadows, could become the third person to face a criminal contempt https://www.reuters.com/world/us/whats-stake-trump-allies-facing-contempt-congress-2021-10-14 charge for refusing to cooperate with the U.S. House of Representatives panel probing the deadly Jan. 6 attack on the Capitol, the committee said on Wednesday.

Representative Bennie Thompson, chairman of the House Select Committee, said in a letter to Meadows' attorney, George Terwilliger, that Meadows - a former House member - had failed to cooperate https://www.reuters.com/legal/litigation/trump-ex-chief-staff-meadows-no-longer-cooperating-with-capitol-riot-panel-2021-12-07 with the panel.

"The Select Committee is left with no choice but to advance contempt proceedings and recommend that the body in which Mr. Meadows once served refer him for criminal prosecution," Thompson wrote in the letter, which was released by the committee.

Thompson later told reporters he expected the committee to meet next week on whether to cite Meadows for contempt. "We have every intention to move forward with a contempt citation on Meadows and we'll go from there," he said.

Terwilliger did not immediately respond to a request for comment.

Meadows refused to appear for a deposition scheduled on Wednesday, instead filing a lawsuit against House Speaker Nancy Pelosi and the nine members of the Select Committee. The suit alleges that subpoenas sent to Meadows violate legal protections for senior advisors to a president, and charge the committee with using excessively broad subpoenas to obtain Meadows' mobile telephone data.

A committee spokesman had no comment. Thompson said he viewed the suit as another effort to delay the process and, while he had not yet seen it, doubted it would have much merit.

Longtime Trump adviser Roger Stone told the committee that he would not testify, citing his Fifth Amendment right against self-incrimination, his lawyer said.

Meadows told the committee last week that he would hand over some documents and appear for a deposition. He changed his mind by https://www.reuters.com/legal/litigation/trump-ex-chief-staff-meadows-no-longer-cooperating-with-capitol-riot-panel-2021-12-07 Tuesday.

Thompson said documents were handed over but that Terwilliger also claimed that hundreds of emails and text messages are subject to privilege.

On Jan. 6, Trump supporters stormed the Capitol in a bid to prevent formal congressional certification of his 2020 election loss to Democratic President Joe Biden. Before the riot, Trump repeated his false claims that the election was stolen from him through widespread voting fraud.

Thompson said documents the committee has received from Meadows' attorney include communications with organizers of that rally and communications with a member of Congress, who was not identified, about the possibility of replacing some state electors with hand-picked candidates to keep Trump in power.

In response, Meadows apparently said, "I love it," according to Thompson's letter.

While more than 250 witnesses have testified to the committee, Trump has urged associates not to cooperate, calling the Democratic-led investigation politically motivated and arguing that his communications are protected by executive privilege. Many legal experts, however, have said that legal principle does not apply to former presidents.

Thompson has noted that even as the committee and Trump’s attorneys battle in court over executive privilege issues, Meadows revealed details about circumstances surrounding the Jan. 6 attack, including conversations with Trump, in a new book Meadows is currently promoting.