How the Russian economy is defying and withstanding western sanctions

Since Russia first invaded Ukraine in February 2022, western media has frequently suggested that economic sanctions against the Russians are going to stifle the war effort or even bring the country to its knees.

As recently as early November, for example, the Wall Street Journal reported that “mobilization, sanctions and falling energy prices” were hurting the Russian economy and that the economic outlook “bodes poorly for Vladimir Putin’s ability to fund Russia’s war in Ukraine.”

Credit agency Standard and Poor’s so-called Global Russia Services Purchasing Managers’ Index is a good example of the sort of data being used to argue that sanctions are now starting to really hurt Russia.

The data is based on information provided by Russian companies willing to talk to them. Consequently, the survey could be drawing on a distorted sample.

The impact of mobilization

Nonetheless, media coverage also contains Russian government and other Russian-sourced statistics that highlight some of the economic problems confronting the country. One example is the impact that the recent mobilization of reservists to fight in Ukraine has had on the Russian workforce.

The Russian daily Kommersant — a sort of Russian Financial Times — has reported that Russian companies have lost workers due to them either being drafted to serve in Ukraine or fleeing the country to avoid it. 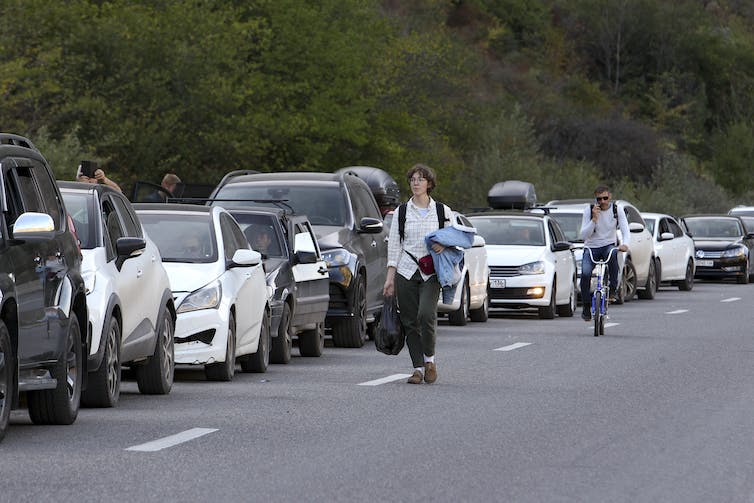 A young man walks as another rides his bicycle toward the border crossing between Georgia and Russia at Verkhny Lars in September 2022 after Moscow announced a partial military mobilization in Ukraine.

It wouldn’t make much sense if Russia’s economy hadn’t been affected by unprecedented western sanctions and the wider burden of the war. But media coverage of western sanctions against Russia rarely mentions that western economies are also struggling, due in part to those measures — as Standard and Poor’s itself recently pointed out.

Is Russia actually faring any worse? In some key areas, no.

Russia’s current economic situation has been helped by a bumper grain harvest this year. Russian agriculture has produced more than 150 million tonnes of grain in 2022, giving it enough to send some to Africa free of charge.

As in the West, Russians too have been facing high inflation in the double figures. But Russian pensions, the country’s minimum wage and salaries are keeping pace with inflation better, in some cases, than those in the West.

There is also evidence that in recent months, the Russian inflation rate has been dropping after spring highs.

There are other positive trends and areas in which the economic picture might improve for Russia, including the replacement of western products and companies with Russian equivalents. 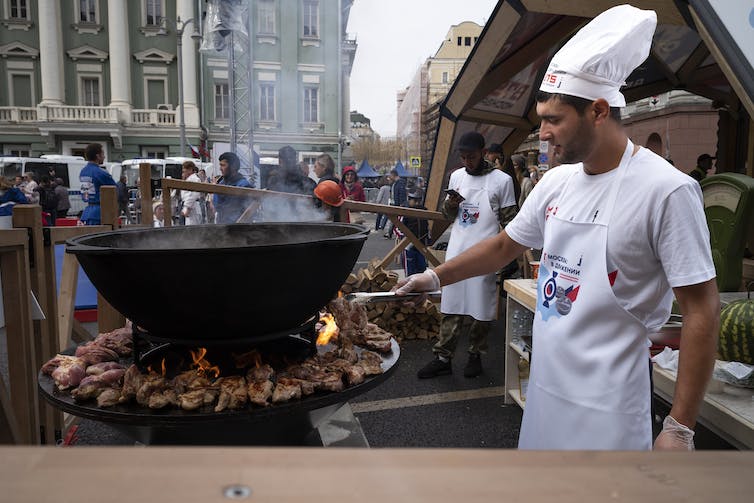 Cooks barbecue meat for customers during a street celebration of Moscow City Day in Moscow on Sept. 11, 2022.

Western icons like McDonald’s may have pulled out of Russia, but some have been replaced. McDonald’s was bought out in Russia and renamed Vkusno i tochka — meaning “tasty, full stop” in English.

As someone who recently visited Russia, I can personally vouch from recent visits to Vkusno i tochka restaurants in both Murmansk and Moscow that they’re doing a brisk trade offering products that are essentially the same or very similar to McDonald’s standbys.

There’s been a lot of reporting in the West about how Russia is finding it difficult to obtain microchips for its weapons. What’s less frequently reported is the efforts the Russian government is making to try to deal with the problem.

Russia is working on ramping up its own production of microchips, though Russian media has also pointed out it’s facing an uphill struggle to be self-sufficient on this front. But even relatively easily sourced basic and older chips intended for consumer electronics can be used in the defence sector, as Russia adapts to new realities.

Many countries and companies may not be willing to adhere to sanctions on the sort of western technology that is being found in Russian weapons.

The West seems to have under-estimated Russia’s ability to withstand sanctions and Russian acceptance and understanding of difficult economic times.

As one Russian recently remarked to me: “We know why we’re having to put up with inflation — do westerners?”

Russian support for Vladimir Putin’s leadership and the war in Ukraine remains high. Anecdotal evidence from my many conversations with Russians from all walks of life in both Moscow and Murmansk in late October and early November certainly support this.

Some university-educated younger Russians opposed to the war have left the country to avoid mobilization or to continue working for western companies that have left Russia. The absence of this group leaves Russians more committed than ever to the war, given that older citizens are more likely to support it. 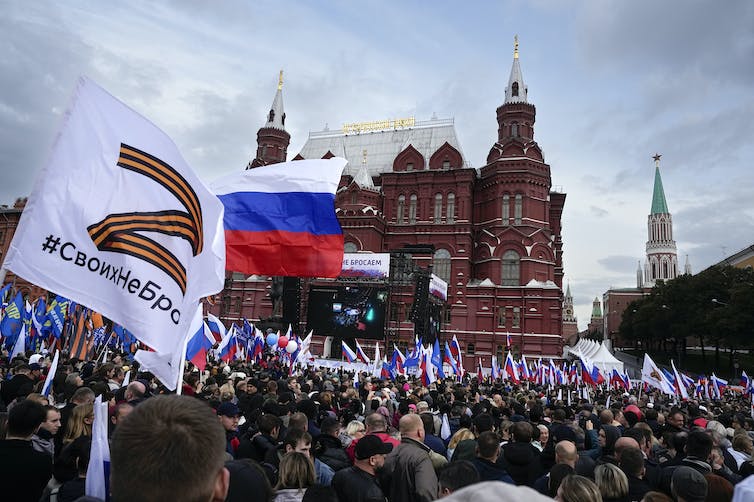 Russians hold state flags and flags with the letter Z, a symbol of the Russian military, with the hashtag ‘we don’t abandon our own’ at a demonstration in Moscow in September 2022 on the eve of referendums in four Russian-held regions of Ukraine.

In the face of recent Ukrainian battlefield successes, many Russians are finally waking up to the seriousness of the war in Ukraine.

Four Ukrainian regions have now been nominally incorporated into Russia. The Russian government slogan “we don’t abandon our own” seems to be resonating for many in Russia who view the war as being about the protection of a Russian-speaking minority in Ukraine.

Russia’s population as a whole is likely able to tolerate more economic hardship, given what Russians regard as being at stake. It remains to be seen if the same can be said for populations in western Europe that are also struggling under the weight of western sanctions.