Scientists know both a lot and very little about the brain. With billions of neurons and trillions of connections among them, and the experimental limitations of examining the seat of consciousness and bodily function, studying the human brain is a technical, theoretical and ethical challenge. And one of the biggest challenges is perhaps one of the most fundamental – seeing what it looks like in action.

The U.S. Brain Research Through Advancing Innovative Neurotechnologies (BRAIN) Initiative is a collaboration among the National Institutes of Health, Defense Advanced Research Projects Agency, National Science Foundation, Food and Drug Administration and Intelligence Advanced Research Projects Activity and others. Since its inception in 2013, its goal has been to develop and use new technologies to examine how each neuron and neural circuit comes together to “record, process, utilize, store, and retrieve vast quantities of information, all at the speed of thought.”

Just as genomic sequencing enabled the creation of a comprehensive map of the human genome, tools that elucidate the connection between brain structure and function could help researchers answer long-standing questions about how the brain works, both in sickness and in health.

These five stories from our archives cover research that has been funded by or advances the goals of the BRAIN Initiative, detailing a slice of what’s next in neuroscience.

Attempts to map the structure of the brain date back to antiquity, when philosophers and scholars had only the unaided eye to map anatomy to function. New visualization techniques in the 20th century led to the discovery that, just like all the other organs of the body, the brain is composed of individual cells – neurons.

Now, further advances in microscopy that make use of artificial intelligence and genomics have allowed scientists not just to see each individual neuron in the entire brain, but also to identify the connections among them and begin to ascertain their function. 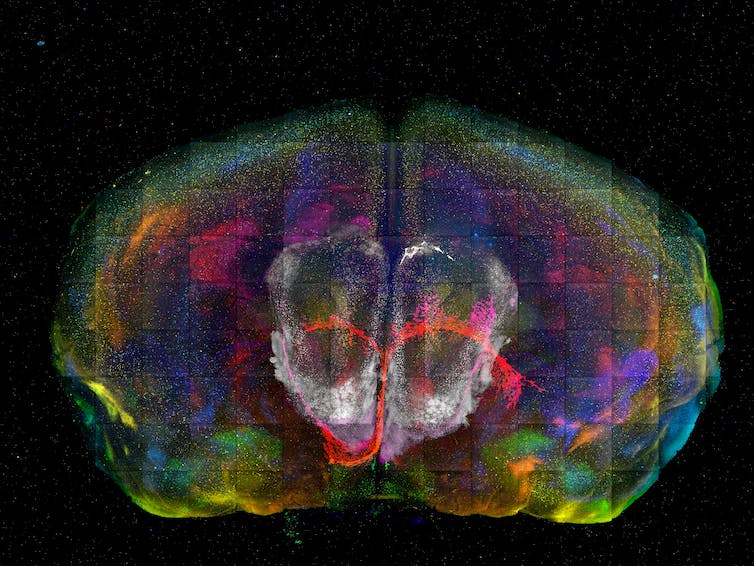 Zooming in on this high-resolution image of a mouse brain reveals rectangular lines where individual image tiles were stitched together, each colored dot representing a specific cell type.

Neuroscientist Yongsoo Kim of Penn State likened this method to a photo mosaic, piecing together areas of the brain that haven’t been charted before. “It’s like building a Google map of the brain,” wrote Kim. “By combining millions of individual street photos, you can zoom in to see each street corner and zoom out to see an entire city.” Creating these high-resolution maps, he wrote, could help scientists develop new theories on how the brain works and lead to better treatments for brain disorders like dementia.

Another fundamental question researchers have been puzzling over is how the brain develops the bumps and grooves that riddle its surface. Until roughly the second trimester of fetal development, the human brain is completely smooth.

Scientists have proposed a number of theories on the mechanics of brain folding. One of them, differential tangential growth, posits that folds form because of a mismatch in growth rates between the outer and inner layers of the brain. To ease the forces compressing the outer layer and restore structural stability, the layers buckle and fold.

Biomechanical engineer Mir Jalil Razavi and computer scientist Weiying Dai of Binghamton University created models to clarify this theory. They identified other factors that may also be at play, like the number of axons – the part of the neuron that transmits electrical signals – in a particular area. “Our brain models provide a potential explanation for why brains may form abnormally during development, highlighting the important role that the brain’s structure plays in its proper functioning,” they wrote.

3. Where memories are stored

Just like the RAM in a computer, memories take up physical space in the brain. Researchers have hypothesized that memories may be stored by rearranging the connections, or synapses, among neurons. While this theory has largely been confirmed by observing changes in the electrical signals neurons produce after memory formation, what triggers these changes has been unclear. 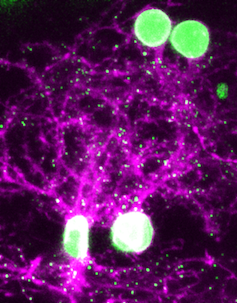 Neurons in a live fish brain, with synapses colored green.

Biomedical engineer Don Arnold of the University of Southern California and his colleagues took a mapping approach. They compared 3D maps of zebrafish synapses before and after memory formation – namely, learning to associate a light with an unpleasant stimulus. They found that one brain region gained synapses while another’s were destroyed, indicating that associative memories may be a result of the formation and loss of connections among neurons.

These findings imply that it might one day be possible to treat conditions like PTSD by physically erasing the associative memory linking a harmless trigger with a traumatic experience. More research is needed, and there are obvious ethical considerations to address. “Nevertheless,” Arnold wrote, “it’s tempting to imagine a distant future in which synaptic surgery could remove bad memories.”

Seizures are sudden surges of electrical activity in the brain. People who experience temporal lobe seizures are sometimes unable to remember what happened immediately prior. This may be due to disruptions to the circuitry in the hippocampus, the part of the temporal lobe key to memory consolidation.

Neurology researchers Anastasia Brodovskaya and Jaideep Kapur of the University of Virginia hypothesized that seizures can cause memory loss by using the same pathways the brain uses to process memories. They mapped the neurons of mice learning to navigate a maze and during induced seizures, finding that both cases activated the same brain circuits.

“Because they use the same brain pathways, seizures can disrupt the memory consolidation process by taking over the circuit,” they wrote. “This meant that seizures can hijack the memory pathways and cause amnesia.”

5. What the nose knows

What the eye can’t see, the nose can for many organisms. From dogs to mosquitoes, many animals behave in ways that allow them to detect and pursue an odor long before its source comes into view.

Scientists John Crimaldi, Brian Smith, Elizabeth Hong and Nathan Urban of the Odor2Action research network use technology to study olfaction, or sense of smell. They trace how the shape of an odor plume informs how it will be detected, how those odor molecules are translated into electrical signals in the brain, and how these electrical signals are reformatted into useful information that influence behavior.

This video from the Wachowiak Lab at the University of Utah shows the activity of the olfactory bulb in a mouse brain. Each odor the mouse is exposed to makes different combinations of neurons light up.

A better understanding of the olfactory system, they wrote, can lead to the development of electronic noses that make searching for chemical weapons and disaster victims safer for people and animals. They also believe that examining the olfactory system can help advance study of the brain. “Its relative simplicity is what allows scientists like us to study it from end to end and learn how the brain works as a whole,” they wrote.

While a grand unified theory of the brain still remains elusive, new tools and techniques are helping researchers excavate its hidden depths. As Crimaldi and his team put it, “An exciting future in scientific and medical development, we believe, is right under our noses.”

Editor’s note: This story is a roundup of articles from The Conversation’s archives.