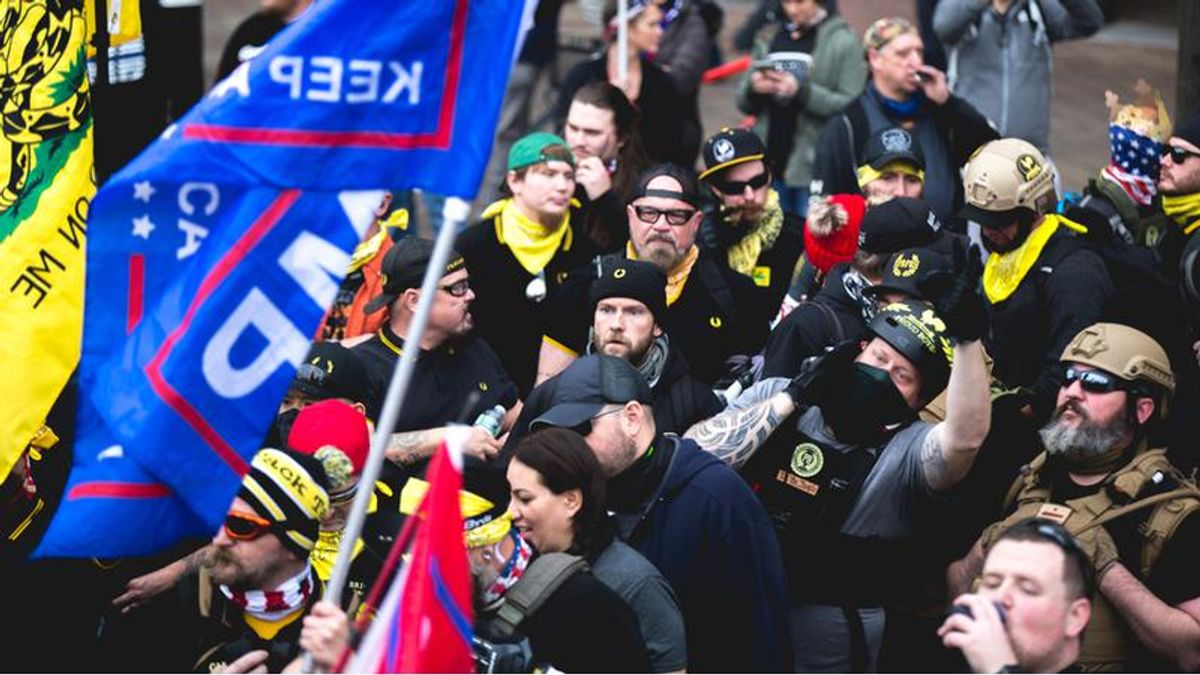 A coalition of public interest groups is urging House impeachment managers to strengthen the case for convicting former President Donald Trump by calling for witness testimony of the January 6 attack on the U.S. Capitol—a strategy that is possible under the Senate trial's framework but that Democratic lawmakers appear reticent to use judging by their proposed reliance on pre-recorded video evidence.Six progressive organizations, led by Free Speech For People, sent a letter (pdf) Monday to Senate President Pro Tempore Patrick Leahy (D-Vt.), Senate Majority Leader Chuck Schumer (D-N.Y.), and Rep. Jamie Raskin (D-Md.)—the House's lead impeachment manager—as well as the House's other eight impeachment managers, in which they press the lawmakers to rethink their approach to Trump's second impeachment trial.

"We write with grave concern that your plans for the forthcoming impeachment trial... do not currently include live witness testimony," says the coalition. "We urge you to reconsider. The Senate, and the nation as a whole, need to hear from witnesses who can testify not only about the violent attack on the U.S. Capitol on January 6th, but also about Trump's actions leading up to that attack."

Witnesses can be requested following oral arguments and senator questions, but the apparent reluctance of Senate Democrats and party leaders to subpoena witnesses and documents has prompted demands for House impeachment managers, who reportedly "wanted firsthand testimony to help prove their case that Trump incited the January 6 riot," to be more proactive.

Unnamed sources told Politico that Schumer, House Speaker Nancy Pelosi (D-Calif.), and Biden administration officials—discouraged by the fact that 45 Senate Republicans have already indicated their opposition to the trial, and eager to "get on with President Joe Biden's agenda"—want the trial "to move quickly" and consider the time-consuming process of bringing in witnesses unnecessary "since Trump's crimes were in plain sight and documented in videos and tweets."

But according to the progressive coalition, "The most compelling case cannot be presented entirely by pre-recorded video. Furthermore, relying exclusively on video evidence makes it easier for Trump's defenders to shift the focus from the enormity of his actions and their consequences to the false claim that the Senate lacks jurisdiction to try a president no longer in office."

The public interest groups describe the following as "witnesses that the Senate, and the American people, need to hear from":

"Just one year ago, at President Trump's first impeachment trial, many senators rightly denounced the very idea of an impeachment trial without any witnesses," the letter says. "They were right back then."

"Trump has been impeached on the most serious charge ever levied against a president: that he incited an insurrection against the United States," the letter concludes. "For the sake of presenting the full case to the Senate and to the American people, the trial must include witnesses to Trump's high crimes and misdemeanors."

Those six progressive organizations are not alone in questioning Democratic lawmakers' hesitation to bring witnesses.

Multiple commentators this week criticized Democrats for signaling their intention to use "only a fraction of the voluminous incriminating evidence against a president who incited insurrection against Congress and the Constitution," as Ralph Nader put it Monday in a column denouncing Democrats' "self-inflicted constraints" and encouraging the party to "go full throttle in this trial."

Renato Mariotti, the legal affairs columnist for Politico, also chimed in Monday to discuss the potential for witnesses to "help overcome the baked-in political pressures and pre-judgments that Republicans will bring to the trial" since "the video alone won't be enough to secure Trump's conviction."

"Given that Trumpism has survived the Trump presidency, telling the full story of Trump's scheme to overturn the election in as compelling of a fashion as possible is important to ensure that the American people understand exactly what he did," Mariotti added. "If they do so, House managers will succeed regardless of how the Senate votes."

Washington Post columnist Greg Sargent on Monday argued that "the case for witnesses is strong."

"There's a lot we don't know about Trump's behind-the-scenes conduct during the rampage," Sargent wrote. "He reportedly refused entreaties to call off the mob, even from terrified lawmakers under siege, because he was enjoying watching it on TV."

Characterizing Trump's trial as an opportunity for Democrats to communicate to the public "the true nature of... the GOP's worsening radicalization... in which large swaths of the GOP proved willing to participate in the overturning of American democracy," Sargent wrote that "a trial with witnesses could also probe the role of some House Republicans in the 'Stop the Steal' movement leading to the insurrection, and any of Trump's communications with them."

"A full accounting is critical," Sargent continued. "Republicans on the state level are racing forward with new voter-suppression efforts, and Democrats have proposed national reforms that expand voting rights and curb counter-majoritarian tactics. They must be prepared to nix the filibuster to make these reforms law."

As Sargent pointed out, "a big political battle is coming over all this as well. Democrats must fully dramatize the GOP's continuing radicalization when it comes to embracing such tactics, so the public understands the stakes of what will be nothing less than a full-scale war over the future of our democracy."

"That won't be helped," Sargent added, "by any failure to create a full record of the most sustained effort to overturn an election and our democracy in modern times, including via intimidation and violence, or any failure to implicate the GOP in it."

Stand Up America in recent weeks mobilized its members to make 60,000 calls to members of Congress from every state, including tens of thousands of calls to Senate Republicans, during which constituents demanded that lawmakers convict and disqualify Trump from holding office again in the future.

"At the end of this trial, any senator that votes against convicting the Insurrectionist-in-Chief will be forever remembered as enabling Donald Trump's attempt to overthrow our democracy and the will of the people," Sean Eldridge, founder and president of the progressive advocacy organization, said in a statement. "And they will be held accountable by voters."